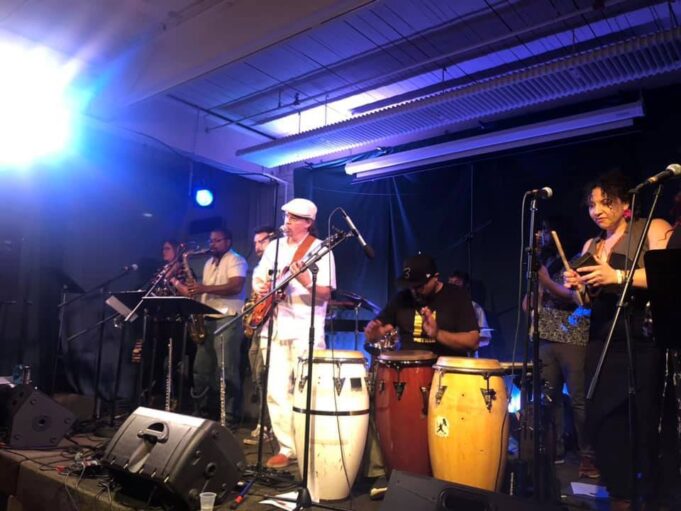 TapRoots at Gateway City Arts by Tom Willits of Music and Poetry Synchronized (MAPS) May 31, 2019

I had heard about this band, TapRoots, and its lead singer/writer Matthew King and wanted to check out what the buzz is all about. Fortunately, Matthew and the TapRoots crew were putting on a party at Gateway City Arts called the Global Groove Festival last Friday, which featured TapRoots, as well as Dave Noonan’s Green Island, and Los Sugar Kings. The three bands all complemented each other beautifully, while preserving their own distinct space in this uplifting celebration of world music.

First on was Dave Noonan‘s Green Island. Led by drummer Dave Noonan, this valley super group of sorts wound their way flawlessly through a number of classic reggae and ska tunes. Among them, standout tunes included Bajo Fondo’s latin-groove anthem, Pa’ Bailar, and a really nice medley of songs from UB40 to close the set. The band was tight, rooted by the sonic blooming of Chris Ball on bass and some beautiful riffing by guitarist Dan Thomas (both of whom would return for the TapRoots set). All of this was backed by a pulsing configuration of horns, singers, and of course, solid dreaming of Noonan himself.

Next up was Boston-based Cuban fusion giants, Los Sugar Kings. Led by guitarist and songwriter, Patiño Vasquez, this four-piece group brought some serious fire to the night’s festivities. Almost immediately, they had people up and dancing with their smokin’ blend of Cuban, rock ‘n’ roll, reggae, and indie sensibilities. Vasquez’s
songwriting was outstanding, and his compositions were well balanced, with danceable, rhythmic interplay. They were occasionally joined by percussionists, Matthew King and Yahuba Garcia-Torres, on a few songs, which only built upon the rhythmic depths that had already been established by this group.

After being warmed up, physically and otherwise by these two tremendous groups, we were ready for the main event: TapRoots! This band has been around for about a year and a half now, and this was my first time catching them. I had heard a lot of great things, and the band really delivered! All I can say is, Wow! Really?! THIS good?!!
Multi instrumentalist and visionary behind the TapRoots movement, Matthew King, took to the stage with this 11-piece band, and took the audience on an incredible journey through time, space, culture, politics, spirit, poetry, and more. He grabbed hold of us from the moment he stepped on stage and did not let go for this amazing ride.

I’ve seen a lot of bands and not only signed some as a personal/business manager, but also recorded albums as a producer, and what I always look for first and foremost is originality. This band has it in spades! The mix of funk, ska, reggae, rock, and African/Latin/Rap influence and beat is extraordinary! One might think there is no way all these influences can come to pass together in some kind of cohesive musical expression, but with TapRoots they do…impressively!

Matthew King leads all the varied, talented musicians with brilliant ease. He not only sings with good command of melody and structure along with great passion, he also plays a strong lead guitar with focused intensity. His songs are varied and impactful and lead the listener down many musical paths always to an interesting, exciting,
penergetic destination. The combination of musical styles is compelling. Whether cranking out a Tower of Power or Average White Band style power funk, smooth psychedelic soul, AfroCuban folklore mixed with salsa, or the Terry Kalb driven Chicago Transit Authority supported horn section rock, TapRoot gets it done!

The first track of the night, Opening, started with a beautifully orchestrated call-and-response chant from the Afro Cuban Santeria tradition, before going into this funky Afro beat-tinged ode to the Yoruba god of the crossroads: Elegba. The band was 11 people strong and featured intricate percussion by Yahuba Garcia-Torres, a tight and powerful horn section, two exquisite back-up singers (both of whom had their own moment’s to shine), luscious keyboard lines throughout, and Noonan’s driving rhythms behind it all. After some scorching solos from the trombone and sax, the song transitioned into Milton Nascimento’s Cravo e Canela, in which King led the audience in singing the exuberant refrain, “Eh! Lala e-la! Eh! Lala-o!”

Throughout the night, TapRoots would dissolve the boundaries between band and audience, performers and spectators, us and them, and bring everybody aboard the TapRoots train as we sang together, danced together, and shared what King explained was “the ceremony of song.” The night was filled with a non-stop exuberant celebration of positivity that lifted everyone in attendance up. And the music not only sucked people in with its passion and compositional intricacy, but the message of hope and struggle was totally captivating as well. TapRoots is not afraid to speak to the most pressing issues of our day, be it climate change in the reggae-tinged anthem Walk Lightly Pon the Land, police brutality in the impressively funky and powerful Hands Up, or meditating on the aftermath of the 2016 election in the hauntingly sublime, Hallowed Ground.

If last Friday’s Global Groove Fest was any indication, the the future of music and the planet looks bright. Matthew King of TapRoots came through and orchestrated a beautiful night of positivity, community, great music, and hope for things to come. If you can catch them, go for the ride and enjoy every minute of the journey. This band is the
real thing and well worth either catching them in person or on their latest CD!

For more info on TapRoots: https://www.thetaprootsmovement.com/