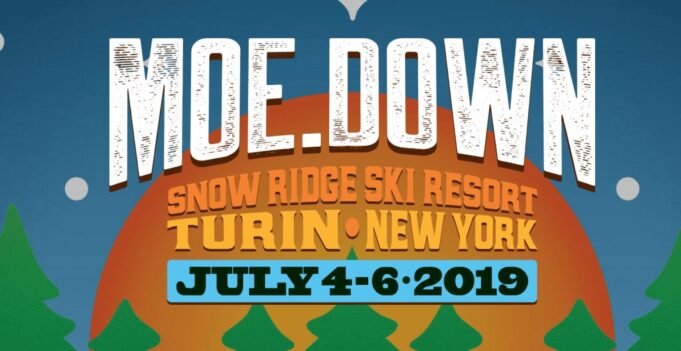 After a yearlong hiatus, moe.down is back with three nights of camping and seven sets of moe. This year’s lineup features Drive-By Truckers, Spafford, God Street Wine, Max Creek, Kung Fu, Everyone Orchestra, Hayley Jane and the Primates, and many more! In addition, a handful of moe. side projects will perform, such as Ha Ha The Moose, moe.pods and Floodwood.

Tickets are available at moe-down.org. RSVP to the official FB event here.

From modest beginnings in a Buffalo basement over two decades ago to today’s multifaceted success, the members of moe. have never lost sight of the earnest, elemental goals that they aspired to from their very first show: to deliver honest, heartfelt music and to ensure the audience has a good time. Considerate and conscientious in their actions and decision-making, moe.’ s refreshingly unpretentious attitude has won them a devoted legion of dedicated fans (ranging from seasoned concert-goers to eager young newcomers) and has given rise to a thriving cottage industry – a self-contained nation-state in which the band and their audience live as equals, thriving on a reciprocal appreciation rare in today’s increasingly fragmented musical landscape.

Drive-By Truckers were formed in 1996 and are an American alternative country and rock band proudly hailing from Athens, Georgia. The band is proudly Southern, their decisively smart lyrics discuss its history, politics, music, contradictions and eclectic character, the country twang and three-pronged guitar produce a gutsy kind of song. Due to friend Jenn Bryant, Drive-By Truckers were able to have an online presence in the early years of internet, and along with Wes Freed, who produced the bands graphic designs, propelled the band into many people’s consciousnesses. The band is poised to launch a tour in fall 2019 and will drop by moe.down on Saturday the 5th.