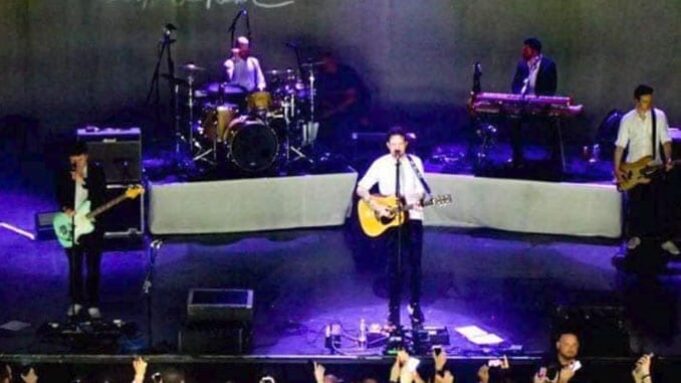 The finale of the four night sold out stand at House of Blues Boston was May 19 2019.

Like all good younger brothers, the majority of my musical predilections have their origin with my older brother somehow. When I was nine, it was Pink Floyd’s The Wall. At twelve it was Rush, and when I was seventeen it was the Grateful Dead. And that held me for quite a while, those bands form the majority of my musical foundation, and between them, I saw nearly one hundred shows in the coming decades.

Now that I am nearly fifty, and my older brother has passed that historic benchmark, it was interesting to watch him develop his own new musical obsession, a songwriter and band leader out of London named Frank Turner. I honestly had not ever heard of Turner, and considering the total immersion of my life in music, that’s surprising enough on its own. Over the last year or so, my brother had seen a half dozen Turner shows. For his birthday, a full week’s celebration was established capped by a four night stand at the House of Blues with Turner and a whole host of other bands in Turner’s annual festival called Lost Evenings. My wife and I joined my brother and his wife for the finale show on Sunday, May 19th.

Each day featured multiple bands on two stages, panels, a pop up tattoo parlor, and an absolutely packed house. After a day game at Fenway, conveniently located across the street, and a decent dinner at the Cheeky Monkey brewery, we showed up at HOB. We saw tables supporting various charities and walked into the main hall for the last half of the set by Skinny Lister. A full fledged cockney’d British rock band replete with guitars, accordion, male and female singers, and a rhythm section filled with the fire of their homeland. The urge to pogo or mosh was strong, and the band’s energy was on display- I would not hesitate to catch a full show by them, and would be prepared for a full on work out, too.

I wandered around a bit during the break, and there was a lengthy line to get into the restaurant where the other stage was. After not moving for a minute, my wife and I decided to just go back to the main hall- and we started meeting Frank Turner fans from all over who were coming together for this special event- their Woodstock or New Year’s eve put together. The personal style of the crowd was mostly in a mature punk rock vein- tattoos, leather, wallet chains- but the most noticeable characteristic was that everyone was super nice and full on stoked to be there. You could feel a general camaraderie and shared experience that exists at other shows, but somehow is amplified here.

Up next were Against Me!, a four piece hard / punk rock band. Hailing from Jacksonville Florida, the band is lead by Laura Jane Grace and has had the tenacity to last over twenty years. Hard driving, emotive and rocking- Against Me! would headline nearly any show of their own you imagine, but were the perfect support act for this show. Nothing fancy to see here, just driving and churning rock songs, punctuated by Grace’s hard look at the world.

After a short break, Frank Turner took the stage. He has a full band called the Sleeping Souls who adeptly support his music and stage presence. Over the next two hours, Turner unfurled an incredible number of songs and clearly illustrated his style, vision and grip on his audience. Never before have I heard an audience sing along with the energy, volume and frequency as this crowd. After three prior sold out shows, they were primed and ready for this show and Frank Turner and the Sleeping Souls delivered all night.

His sound to me is very poppy and sufficiently punk and hard rock to qualify as both. If Green Day had never turned commercial, it would be a good person as Turner share’s Armstrong’s penchant for 3-4 minute songs that are incredibly catchy and easy to access. No crooner, his vocals are melodic but not overly skilled, he’s a rocker more than a singer. But his ability to create catchy melodies and infuse them with energy, emotion and meaning are finely honed.

His music has been called Happy Music for Sad People- and everything that I saw that whole night properly reinforced that idea. He has created a vibe that is important to his fan base, a lifestyle oriented band like fans describe in terms of their love of other bands from the Dead to Phish, Zac Brown Band, even Adam Ezra Group also out of Boston. People are attaching themselves to Turner’s music, and thereby adopting going to see him as a focus of their calendar. His words are their modern folk lore and script, and his music is the soundtrack of their lives.

You couldn’t really ask more of him, as he ran around like a crazy man, sweated, stomped, jumped, sang and strummed from end of the stage to the other. Over the course of the set he played with the band, solo acoustic, back with the band, supplemented with a full horn section (for the first time Turner indicates), and finally after many encores, one more song by himself. It felt like he was delivering himself directly to the audience.

Four Simple Words
Get Better
Plain Sailing Weather
Losing Days
I Am Disappeared
Long Live the Queen
Peggy Sang the Blues
Once We Were Anarchists
One Foot Before the Other
Glorious You
Reasons Not to Be an Idiot
Mittens
Wessex Boy
Solo Acoustic
Substitute
Josephine
Be More Kind
Full band, with horn section
Eulogy
Bar Staff
Little Changes
If Ever I Stray
Encore:
Love Ire & Song
Photosynthesis
Recovery
I Still Believe
Solo Acoustic
The Ballad of Me and My Friends