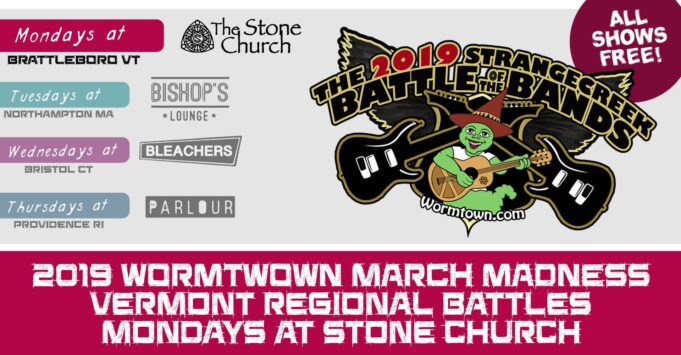 Monday night was the finale of the Brattleboro Strangecreek battle of the bands. This was special as I now knew of each of the bands, having seen each of the three rounds leading up to this night. The Dirty Vice Band from Bayshore Long Island, Zillawatt from Hartford, and Reverend Dan and the Dirty Catechism shared the stage in a battle for a slot in the finals on April 13 in Greenfield MA at Hawks and Reed.

The Dirty Vice Band came on first, and fired right into an introductory song- in classic show band style- with the lead singer off stage and the band getting a nice groove going. A few minutes in, the back door opened and a guy walked into the room with a flannel shirt, winter vest, huge hiking backpack, and a lantern and started wandering around. It was curious, but when he took the stage it became clear- Here was the lead singer! Dressed for the occasion they completed the song “Lost in the Woods.”

The next song saw the singer, Rayzor Lazor change into a fly Trans Am zip up, sea captain’s hat and light up sunglasses. He danced the whole set and sang atop a super tight band in which every member sang backup at one point. Keys, guitars, drums, percussion, bass and voice all come together in a great mix of funk and jam.

In the middle slot was Zillawatt who brought a great set, too. Guitar, bass, drums and a utility man who played keys, vocals, sax and ewi (electronic wind instrument) come together in a mixture of jam, rock and jazz funk. Each band member really brought it, and showed a level of musicianship that was above what many bands can achieve. They were probably the most technically advanced band of the night, perhaps of the series, in terms of their proficiency on their instruments. I can see great things happening for them as they continue their journey to learn more about each other and can write more songs to reflect the individual skills of each member. You can tell they are having a great time playing, too.

And finally Reverend Dan and the Dirty Catechism took the final set of the night. Drums, bass, keys and the Reverend on hollow body guitar and vocals. Their vibe is punky and rollicking song driven rock. The band depends much more on energy than on precision, and they sounded like they were a fire that starts with an explosion and then slowly builds into a raging inferno. Their song “Our Love is a Circus Fire” gets stuck in my head and may be my favorite song of the whole competition. It is hard to say if the band will continue to build their song catalog or simply combust in a burst of energy.

At the end of the night, I was truly at a loss as to the victor. Each band was so different. More than the difference between apples and oranges- more like a pineapple compared to an apple compared to a cranberry (don’t ask me which one is which.) The bands just weren’t very similar at all, befitting a true festival battle. In the end, more so than who jammed the best or which band was most proficient, the consensus among those consulted (judge, club owner, sound person, door person, and a few patrons) was that they had a favorite band of the night despite other considerations.

And thus Reverend Dan and the Dirty Catechism will go to the finals in Greenfield on April 13th for a chance at a slot at Strangecreek Campout Memorial Day weekend. Go to that show and check out each of the winners, where the victors from Bristol/Hartford, Northampton, and Providence will all meet in one giant battle!

Drop us a line at [email protected] with your live music news, show review, concert memory, or to say Hello!

ALSO: Check out the search feature in the upper right corner. Search for your favorite artist, genre, festival, or venue to see an incredible amount of content, much of it with totally exclusive audio or video.