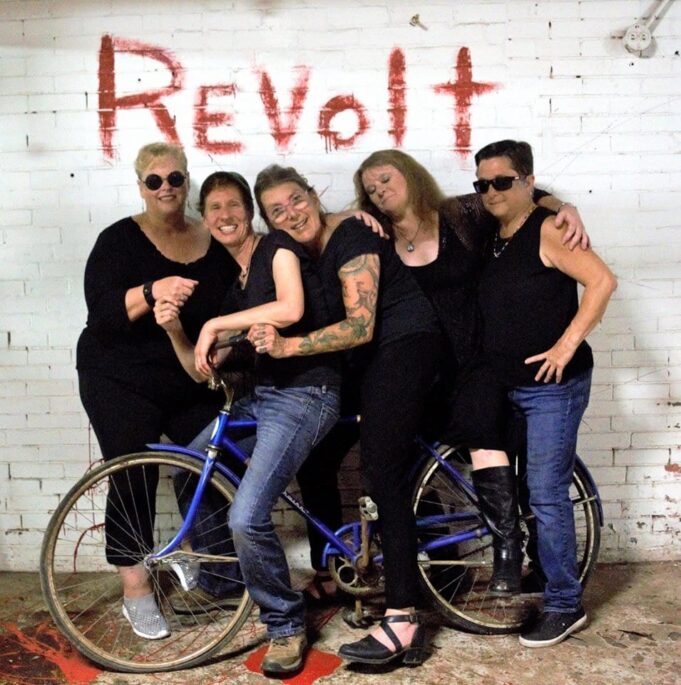 It’s a good thing She Said was on the ground floor at Hawks & Reed Saturday night.  With a couple of stories’ buffer zone above, the roof was left intact and unscathed.  Not much else went untouched, though, especially all the human bodies filling up the place.  It was just about as packed as packed can possibly be without exceeding the positively ‘jam-packed’ threshold (pun accidental but accepted).

The room was filled with people and their positive energy, the air was filled with the music and ebullient joy of She Said at their first-time CD release party, and the vibe all night was exhilarated and electric, and righteously repcriprocal.  It was like a full moon in Heaven with a few hundred people all on the same trip… or page.  All that and not one whiff of over-crowding, over-doing, or over-anything.  So much fun!

She Said is one of still, even now, only a few fully female featured musical collectives, and a whole bunch of friends and fans show up at their shows for fun and not just fealty- though camaraderie abounds as well among all the many personalities and genders.  It’s a Human Connection thing.  The atmosphere is infectious and invigorating, and all that was all the more so this particular evening, for all the aforementioned reasons.

These might not even be the upper-most upper-crust of area instrumentalists or vocalists or any-particular-ist, but what they are is Real.  These are Real People having a blast and sharing the love with original compositions and everything about them is so down-to-earth that no-one is expending their energy on analysis and scrutiny of every little tactic, technique or trick-of-the-trade being put to the test… Ain’t nobody got time for all that; too much fun is bein’ had.

Not that we wanna sell ‘em short- there’s plenty ‘nuff licks and riffs and all goin’ on all around the stage, and lots of harmonies, too- but the plentiful supply of all that ain’t the point; this is a band that maintains a whiff of that ol’ post-punk garagey-ness that refuses to take itself too seriously.  Kinda like the Seattle scene settles in at Greenfield, with way better weather.

Now, if my impression is accurate (ya never really know, do ya?), She Said is a pretty new band.  Catching them at one of New City Brewery’s Valley Music Showcase events about a year and a half ago, I remember getting a notion of newness- it may be simply that the couple of ‘em I knew a bit, were only just then starting to talk about their band.  Drummer Gail in particular was totally enthusiastic like a schoolkid, cheerfully and choice-lessly selling me on the group and leaving me with no possible option of not seeing them, and as soon I could.

That particular night was maybe not the best time for all but one o’ them band’s to compete; none of ‘em had half-a-chance against the hands-down winners that time out.  No shame in that, either.  The reason I bring that up, besides whatever I just said, was that I could see a big difference from then till now.  These then-half-dozen women were then so much into the casual, keeping-it-fun thing that a free-wheeling looseness prevailed.

Then, as now, the good-time community focus was what it was about- but they seem to have, hmmm…  matured?  Ya gotta keep in mind, now, these ain’t no spring-chicken chica-pals; but I kinda get the impression that they have “raised it up a notch,” which is a lot like “getting serious,” but they really don’t have that serious tone that costs a lot of bands their free-wheeling fun-ness. They still kick it in the garage, and that’s a good thing.

Ya might try to call ‘em “serious fun,” but ya can’t, quite.  Cuz they just ain’t, and I don’t figure they’re ever gonna be.  Serious, I mean…in the all-growed-up sense.

But fun, hells yeah.  Next time the cat pisses in my oatmeal, I’ll know just what to do to lighten up and loosen up:  listen up, to She Said.