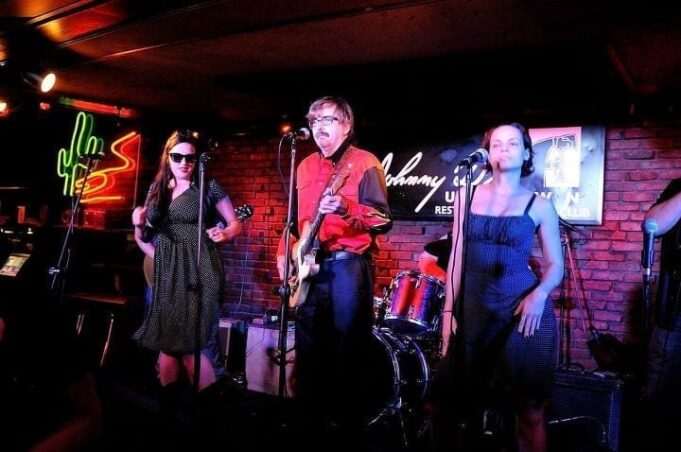 The night before Thanksgiving seems to be a bit of a Big Deal around here in my neck of the ‘hood. I noted a good half-dozen shows that would have been up top o’ my list, and another six or eight that might have been included in my itinerary if I had been road-tripping like I’d been doing for a couple of years there, devising routes that would take me to three or four venues in a given night. Not so this time, though, and not just cuz I’m getting (ahem) ‘older.’

Turkey Eve 2018 was a one-stop deal for me. It has been for a number of years now, maybe even as long as Wildcat O’Halloran has hosted his Annual Benefit for the Western Mass Food Bank. It all started in another location for a couple of years, then he and a bevy of blues-goers settled in at Spare Time in Northampton. I’m pretty sure this was the same time as his weekly Blues Jam started, which also happens to be when a certain humble scribe started his ramblings on the road. In other words: 2013, after a couple of years of prep at the Harp in Amherst.

Wildcat O’Halloran is a Blues Man. Without knowing the details of his fifty-plus years on the planet, we know that he works at least full-time; that’s enough to drag anyone down. He also functions as a damn-near full-time (at-least) professional musician… and then there’s the whole family thing, plus whatever else keeps one busy in the town of Slumberland. So the guy is running a lot. How a hard-workin’ som’bit like that can manage to put out recordings at the rate of something like one per year, give or take, is a matter for high regard, and the dude has the regard, respect, and reputation of a top-shelf Blues Man in the Western Mass area and beyond.

Assuming he spent a few years cutting his teeth (and running/ working his own restaurant), one can see that almost two dozen releases must have surely filled up a couple of decades. Wildcat’s first recordings came out on good ol’ analogue, vinyl, LP records. And a few on cassette tape, too! Can you imagine? Well, some can; and some even remember. Some eight of those later CD releases are currently available, along with a DVD; and one of those older albums even made its way into a newfangled digital re-issue… and that sucker sold out. It seems the man is squatting on some number of vinyl EP’s from back in the day- he always has one to raffle off at his “Night Before” event.

And then there’s the company he keeps: top-tier, natch, being as he’s one of ‘em. Here in our area, he’s top o’ the heap; and in his many trips around the country and beyond, Wildcat has been in bands with, worked right along with, hit the road with, and sometimes opened shows for, too many names to mention. So we’ll just toss a few around: how ‘bout backing up Bo Diddly, Coco Montoya, Duke Robillard… touring with John Lee Hooker or a couple of James’s, Cotton and Montgomery… want more? There’s Matt “Guitar” Murphy, Luther “Guitar Junior” Johnson (no relation, lol) and Gregg (the other brother) Allman. And then there’s playing various venues with top o’ the bill names like John Mayall… J. Geils… Charlie Musselwhite… Stray Cats….

Speaking of strays- you should hear the sounds and squeals that come outta this guy’s beat-up old Telly-caster! Once in a while, he’ll pull out the PRS instead, but most times he comes armed with that scruffy ol’ scrappy Fender. It’s like if Willie Nelson played electric, and the blues. F’real, either way it’s a matter of the implement being even rougher than the dude what owns it (well… in one of the two cases, anyway).

So, yeah… Wildcat O’Halloran is a True Blues Man. With a head full of history and hands fueled with fire, he fires off some pretty nasty riffs, licks, and caterwauls. This “Night Before” benefit he puts on every year always pulls in some pretty indomitable talent. Some of the area’s very best show up. He might or might not even have to call and ask ‘em to come and play for free; they all come freely. In fact, the very first of these events was a benefit for national semi-star Art Steele. Also, it did not escape notice that the Catman was right about at the top of his game, emcee-wise, gliding thru the whole show seamlessly and with proper panache, making it look it was no sweat at all, and a whole butt-load of fun.

This time through, a couple of the new-ish area stars on the rise came in, like Buddy McEarns (don’t he look a heluva lot like another Buddy… or a certain Elvis?), and Lisa Martin (who has quite a catalog of her own built up); and a fair sample of other, large-ish personalities and globetrotters, like Wally Greaney f’rinstance. Johnny Marino blew a bunch o’ harp even after his own set, like with local favorite Buddy McEarns- which made for a real fun mix. Buddy normally might put a little folksy harp to his lips to accompany his unique “Ragabilly” blues, but no need here. And the dapper young lad even went without either/both of his Joe’s (Carvalho &/or Dulude) playing lead guitar tonight, which lead to no lack whatsoever. The boy’s been working hard and it shows. No longer limited to just a “valiant effort,” Buddy exercised quite a few different sounds and techniques in his half-dozen numbers. ]

Many of your singer-songwriter types will handle a few leads and fills capably enough, but they have so much else going on that it makes good sense to let a specialist handle the role of lead guitarist. Buddy’s work jumped out right away; I had to look and make sure one of the other heavies wasn’t playing from back in the shadows. Some feller there taking notes and pictures suggested that Buddy should win the “Most Improved Swimmer” award this year (that being the only honor some of us ever achieved in our lives). Primarily, though, Buddy McEarns’ real “thang” is his quite particular style. Called “Ragabilly” by one particularly articulate observer, this guy has a real knack for creating surprising and engaging arrangements for all his material, such that his repertoire maintains an admirable consistency, whether a given number is one of his many originals, or one of his highly original arrangements of others’ songs. This is a perfect example of an artist creating versions of songs, rather than ‘covers’ per se.

Speaking of “heavy hitters,” the aforementioned Wally Greaney delivered one of his hugely energetic and highly professional “blues suites,” Janet “Mama Soul” Ryan packed a whole variety show into her half-hour or so, with “Mighty” Joe Elliott playing her keys while she fronted, and her Number One Stalwart Ray (“Blue Lunch”) Chaput playing his tasty and classy, classic-style blues guitar, and guest globetrotter Barond Raymond adding sax and some harp, along with Hartford-area hero Johnny Marino. Johnny always does solid, rocking blues with a lot of traditional-style style, and a whole lotta mighty fine harp. Eva Cappelli, as most anyone around here knows, is a mighty fine songwriter with a band of always-primo players, and the lady sings amazingly- how can she sound so soft and gentle here, and bellow out with such power there?

Carl Hopkins left the joint before the end. I think I know why. He got tooken for a long-ass ride, like right from the start and pretty much straight thru up to and including Eva’s set. OK, not every minute… but a lot. Not that anyone could possibly have a problem with Carl Hopkins’ fantabulous guitar playing (could anyone’s playing be called ‘perfect?). He coaxes so many kinds of right-on solo’s and embellishments, while always providing perfect backing, with that trusty old SG of his, one might look around expecting to hear Larry Carlton- so fluid, man, but actually so very variable that … nope, that guy is his own man.

Now, speaking for myself, I can say that I left there feeling so groovy that I couldn’t hardly get to sleep! I was charged with pulses of positivity not only from the music and the fun and the bartender (the illustrious Doctor Drexler, mon Cheri); the sense of community was really uplifting as well. Of course, the icing on the torte, or rather the point of it all, is that some sum of money came out of the final cat-call of the night, the fifty-fifty raffle, and those dollars are now headed to the Western Mass Food Bank.

The music scene has been rolling along just fine without nearly so much nosen-poken infiltration and observance from this humble scribe lately, but as for the writer himself, or the human organism… well, the edification of Fellowship that comes, variously but dependably, with so many different segments of the local and regional music marketplace -at the risk of spinning hyperbolishly- this ‘spiritual’ uplift has, over these last five or so years, saved this life. (Long story/ stories there.) And where else but deep in the blues, played with the joy of camaraderie, might one find himself so “churched,” as Steve Piper calls it, that the difference then to now is “palpable” (lol, there’s that word) not only internally, within said self, but the change is actually detectable- nay, readily visible- to even the most casual of many acquaintances. Livin’ proof, I tell ya … right here, right now … thanks for having me!