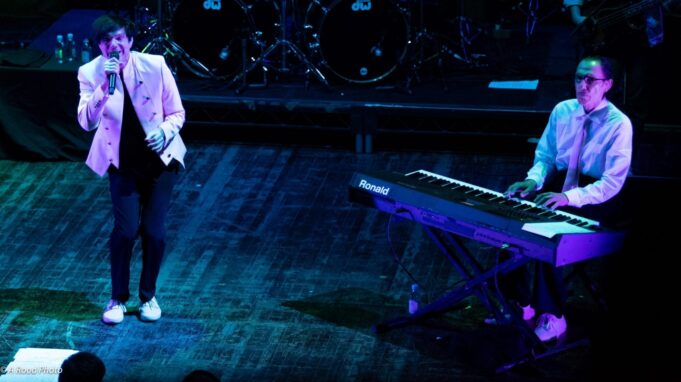 Sparks— wickedly inventive brothers Ron and Russell Mael—took to the stage for two nights at the Palace Theatre in downtown Los Angeles to mark the end of their successful Hippopotamus tour. This run took them around the world for the better part of a year to promote the album of the same name.

Selections from Hippopotamus, released in 2017, featured heavily throughout the set and included “What the Hell Is It This Time?”, “Edith Piaf (Said It Better Than Me)” and “Missionary Position,” peppered among notable hits and crowd favorites from the band’s earlier albums, dating back to their debut in 1971.

A full gallery of photos from this night is located here.

But this was no nostalgia act. The Maels have always been more fascinated with what lies ahead than resting on their laurels and said as much as the show came to close by announcing their upcoming documentary helmed by uber fan and Baby Driver director Edgar Wright, who was on hand to capture it all on film. “Weird Al” Yankovic also made an appearance on the first night of shows, joining Sparks to play the accordion on “Amateur Hour” during the 80-minute finale.

The set list:
What the Hell Is It This Time?
Propaganda
At Home, At Work, At Play
Unaware
Tryouts for the Human Race
Angst in My Pants
Probably Nothing
Missionary Position
Hippopotamus
B.C.
The Rhythm Thief
Edith Piaf (Said It Better Than Me)
Never Turn Your Back on Mother Earth
My Way (Claude François cover)
When Do I Get to Sing “My Way”
The Number One Song in Heaven
This Town Ain’t Big Enough for Both of Us
My Baby’s Taking Me Home
Encore:
I Wish I Looked a Little Better
Amateur Hour

A full gallery of photos from this night is located here.