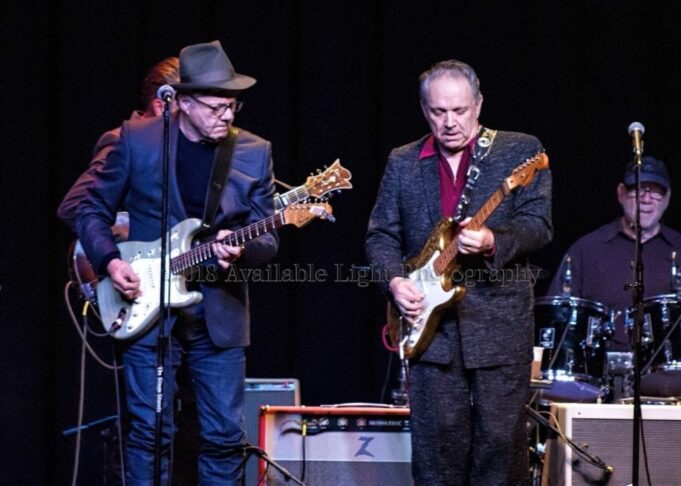 This was a gig I had been waiting for it seemed my whole life. I had been listening to Jimmie Vaughan for as long as I had been listening to his little brother, Stevie Ray. Both are outstanding guitarists in their own right.  Jimmie was in the middle of a tour that kicked off in his home state of Texas, playing the pre-show University of Texas game in Austin. He had just come from the Narrows Center for the Arts in Fall River, MA the night before, and was headed down to New York City after this show, for a two night stand at Madison Square Garden with Eric Clapton and Gary Clark Jr. 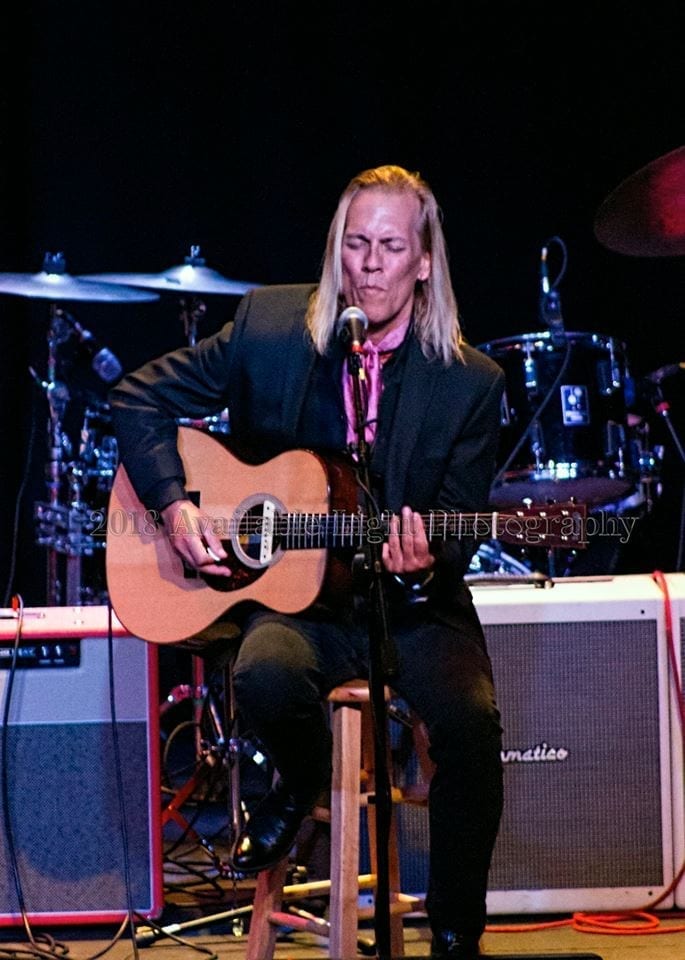 I got up to Plymouth about an hour early, got my ticket and met up with the House Manager, Brooks, to sort out where I would be shooting for the night. It was intimated to me that there would be a ‘special guest’ joining Jimmie on the stage later in his set, and that the band management would rather press wasn’t ‘seen’ due to that. I checked my seat, which was decent, but I thought, given the prior advice, I would have better luck shooting from the balcony where Brooks had suggested. Full gallery of photos here. After a short time  Brooks came out on stage to welcome the crowd, and introduced the opening act, Mark T. Small, a native of southeastern Massachusetts.

Mark plays both Delta and Chicago style blues, all in a one man show. He has opened for and played on the bill with such names as; Johnny Winter, James Cotton, Coco Montoya, Robert Cray, John Mayall and many others. Throughout Marks set, I was not just impressed by his guitar playing and singing – though very talented at both, and is also a pretty good banjo picker as well. 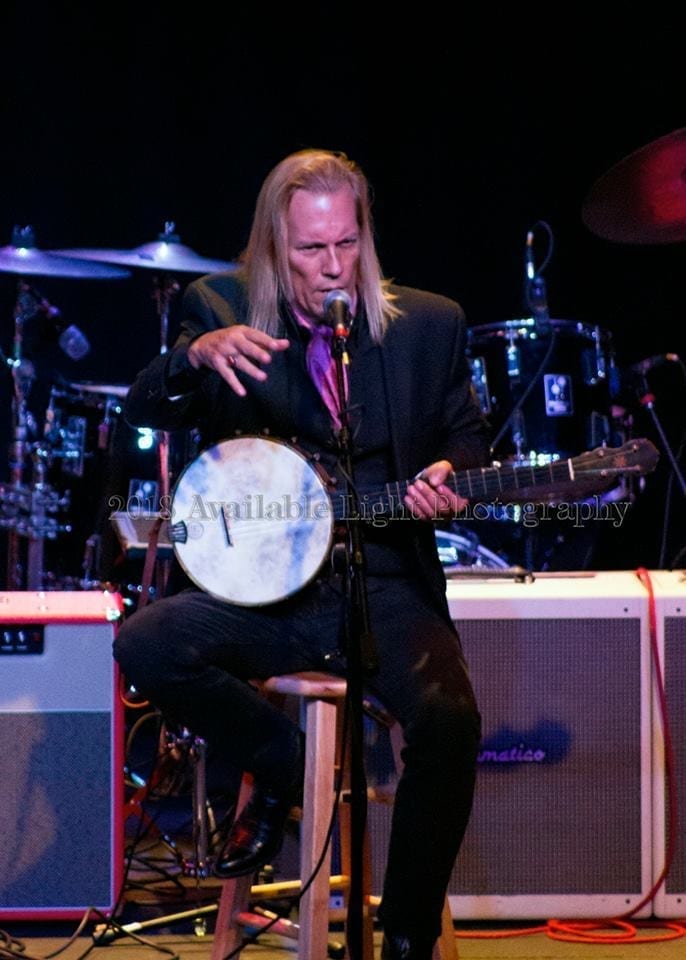 What made his performance that much more enjoyable for me was that he gave bits of musical history between songs, engaging the audience in a short form Q&A. Before bringing out the banjo, he asked the audience if they knew what was considered to be ‘America’s Instrument’, some people said guitar – which he quickly told them that the guitar originated from Spain. The banjo had its roots in Africa, originally fashioned from a hollowed out gourd, and it was brought over to America and refined into the instrument used today. It gained popularity during the civil war, and by the late nineteenth century, there were over ten thousand banjos in homes in Boston!  He followed up that interesting tidbit of musical history with a song entitled, ‘Cuckoo’.  I thoroughly enjoyed Marks set and would definitely encourage anyone to catch him when he’s playing in your area!

There was a brief intermission before Jimmie and the Tilt-a-Whirl band came on, and I felt a thrill of excitement.  Jimmie had a large ensemble with him, a seven piece band consisting of George Rains on drums, Billy Pittman on rhythm guitar, Mike Flanigin on the Hammond B3, Billy Horton on bass, Doug James on baritone and tenor saxophones, Mike Rinta on trombone, and the Tilt-a-Whirl Singers: Georgia Bramhall, G Sharp, and Charlie Redd.  Shoutout to Billy Pittman for providing me with the names of the current band members!  You rock! 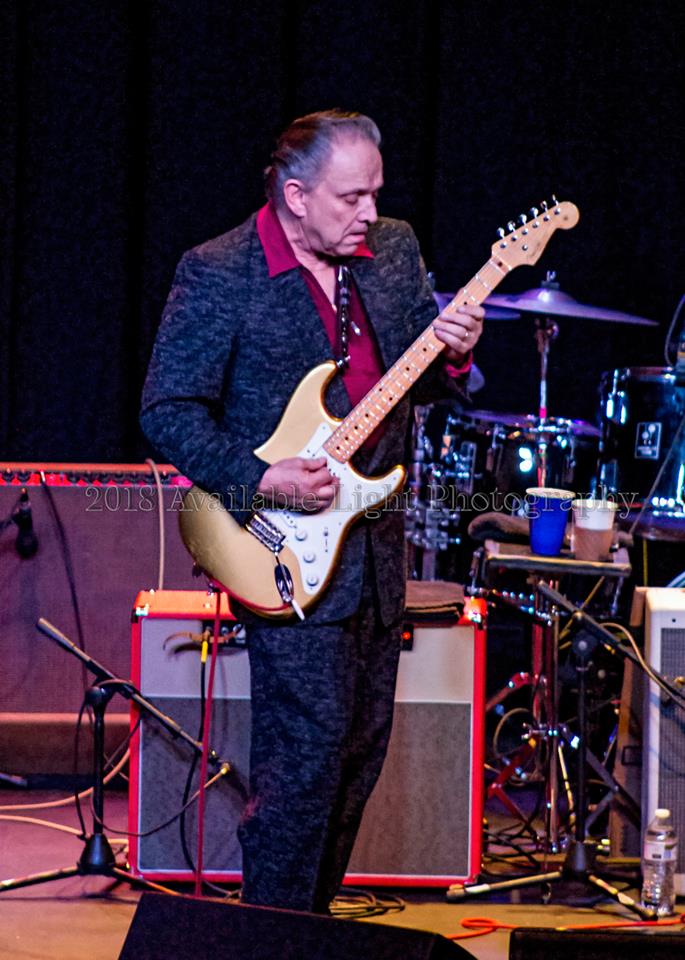 They opened with his cover of Comin’ and Goin’, and I was just so enthralled that I almost forgot to start getting shots of the show. I still couldn’t believe that I was there, getting to cover Jimmie Vaughan. And what a band!  They were amazingly tight, and had such a great full sound. Incredibly talented musicians on their own, but together creating what felt like a ‘blues orchestra’. They played through the first set, rolling out songs like ‘I Ain’t Never’, ‘Roll Roll Roll’, and the feel good classic ‘Hey! Baby’ – sung by the organ player Mike Flanigin, who encouraged the crowd to sing along.  Jimmie also played ‘White Boots’ off of ‘Family Style’, the album he did with his late brother. The second set was just as amazing, and just as diverse, and included ‘Texas Flood’, a tribute to Stevie Ray. But the real surprise was when he brought out his surprise special guest, who also happened to be celebrating his birthday that day. I couldn’t believe my luck when Steve Miller walked out on stage to join them. Another musician I had never thought I’d get the chance to see play live, never mind get the chance to photograph!  I learned that Steve had gotten his start as a blues guitarist, 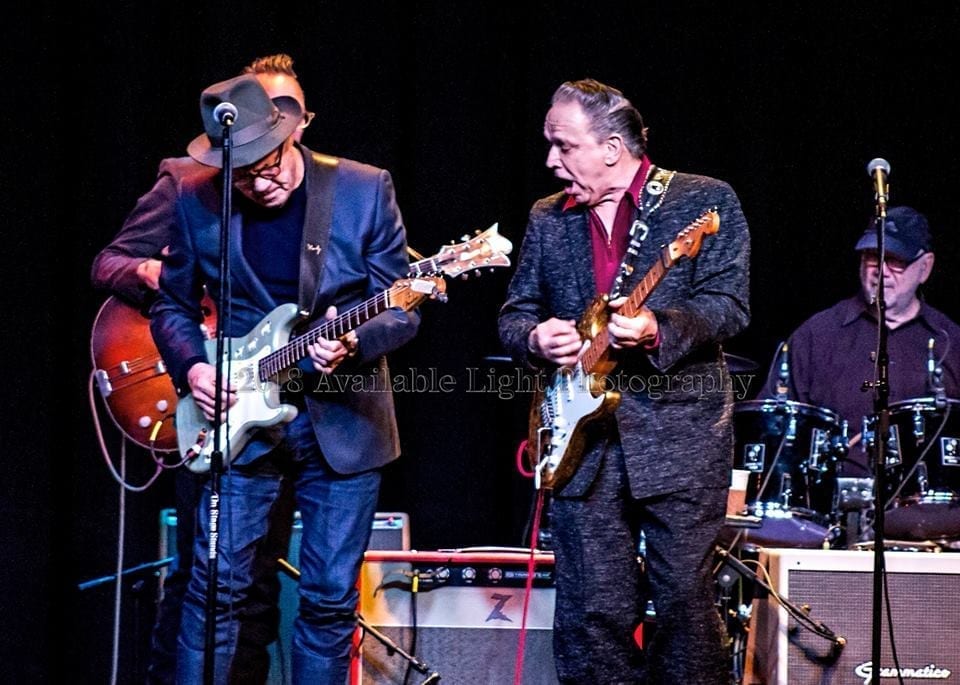 which was something I didn’t know prior to that night. He and Jimmie played off each other, starting off with The Fabulous Thunderbirds number ‘The Crawl’, then doing some classic Chicago blues numbers like ‘Tore Down’, T Bone Walker’s ‘Let Your Hair Down Baby’, and, in memory of the recently departed Otis Rush, ‘All Your Love I Miss Lovin’.  The whole show was a great mix of Texas and Chicago blues, and some songs with his signature brand of blues rockabilly ala The Fabulous Thunderbirds. If you have never seen Jimmie play live, get yourself out before this tour is done!  You still have time left. He has one more stop on the current tour at the Moody Theatre in Austin, TX on November 8th. Then he’s playing a two night stand, December 28/29, at Antone’s in Austin with Mike Flanigin, Chris Layton, Sue Foley and Billy F Gibbons. He’s got you ATX peeps covered for the end of this run!  I had an absolute blast and I hope y’all enjoyed reading about it!