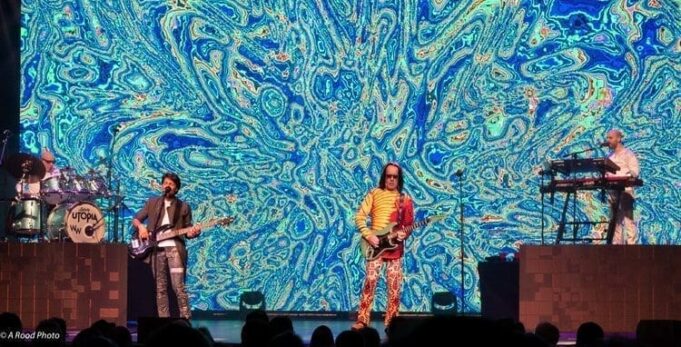 Utopia Late Night with Jimmy Kimmel June 2018 by Lizzy Goldstein with photos by Stevo Rood  (photos from a show that week, not the night of the taping, as there were no photos allowed). To submit a story or to just say hello, email us at [email protected] Check out the Live Music News and Review.com Facebook page for updates and announcements. What’s it like to see Todd Rundgren and Utopia in a tiny club with about 60 other fans? For a brief moment on a Wednesday afternoon in June, I got to find out. Granted, it was a fake club on the set of Jimmy Kimmel Live! but those of us rabid (or daring) enough to play hooky midweek did our best to turn it into a real rock show. The Jimmy Kimmel taping took place the day after the final date of Utopia’s reunion tour and provided a suitable epilogue to my own personal 12-day, seven-concert marathon. I was barely three years old when Utopia disbanded, so I missed out on their unique brand of rock and roll the first time around. From all accounts, they haven’t lost a step in thirty years and after my first show, I was hooked. Getting to see the band perform a few more songs for free? And it’s going to be on national television? Sign me up!

The show itself was billed as a “mini concert” that included just the Utopia set and nothing at all involving Jimmy himself. Our tickets told us to arrive by 2:45 PM at the latest, and to dress in “nice casual” attire, as if we were going to a nice dinner. Not what I’d usually wear to a concert, but I would have worn a ball gown if I had to. When I showed up around 1:00 PM, there were a handful of fans already starting a line on the sidewalk in the sun. We spent the next two hours or so standing around and sweating and standing around some more. Fortunately, Todd fans are some of the friendliest people I’ve ever met and we had plenty to chat about. Check out Dave Diamond’s review of Utopia at the Paramount here. Eventually a couple of employees came out and scanned all of our tickets and gave us wristbands with (very appropriately) smiley faces on them. We were led into the studio, which was basically a tiny stage set up in the corner of a rather small room. A barrier between the audience and the stage left space for one of the cameras to roll back and forth, but in the front row, we were no more than four feet away from the band. Once we were all crammed in and suitably cozy, a Jimmy Kimmel staff member appeared on stage to get us pumped up. He told us to act excited (not that hard) and ignore all the cameras zooming around in front of us (slightly harder.) Soon, Utopia came out and performed stellar renditions of Trapped (picked, I assume, to highlight the vocal trade-offs between Todd and Kasim Sulton) and the perfect-for-dancing song, One World.

Many of us had been told prior to the show to only expect two songs, so we were extra thrilled when the staffer from earlier huddled up with Todd and asked if they’d like to play another. The band obliged and treated us to an apparently unplanned The Ikon. Once they were done, the band quickly left the stage and the fans were quickly ushered out of the building back onto Hollywood Boulevard to eagerly await the air date so we could relive it all over again. As crazy as it may sound to stand around for two hours to spend twenty minutes in Utopia, the whole experience was worth every second.   Check out Dave Diamond’s review of Utopia at the Paramount here. To submit a story or to just say hello, email us at [email protected] Check out the Live Music News and Review.com Facebook page for updates and announcements.