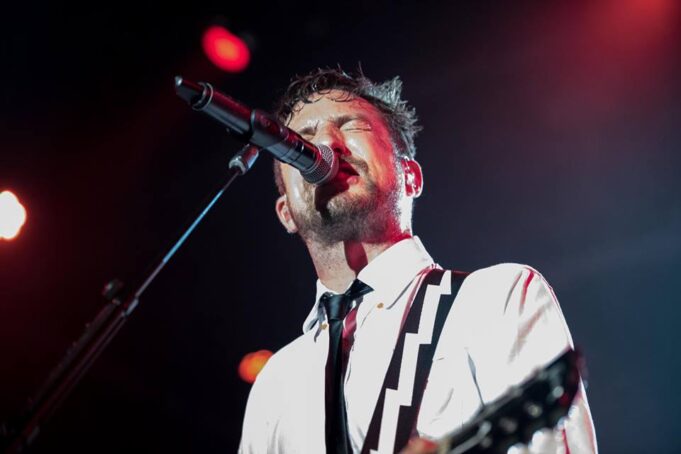 The crowd was crazy enthusiastic! They knew every word- I need to step up my game and get educated as this was a brand new show for me!  I was not familiar with Frank Turner until this moment and to say that his first impression on me was an impact is a gross understatement. Turner is great on stage; he gives everything he has to the audience and they return it all to him. The place was just jam-packed full of fans and I understand now that previously I was missing out on his unique sound. The touring band is called The Sleeping Souls and consists of Nigel Powell, Ben Lloyd, Tarrant Anderson, and Matt Nasir. His new album, Be More Kind, is out now on Xtra Mile Recordings and many of the songs that he played that night were previews of those selections.  I’ll be keeping an eye open for its drop.

Turner wears his influences on his sleeve, and can feel the influences that range from his early yearnings for American pop indie bands like Weezer and the Levellers, mixed with his Americana influences like Johnny Cash, Springsteen and Canadian treasure Neil Young.  Turner’s popularity and presence in the US is a testament to the revolution going on in the UK right now of Americana music, so much so that they now have Americana festivals and charts over the pond, perhaps appreciating its roots and resultant evolution more than we do here even in America.

The Way I Tend to Be

I Knew Prufrock Before He Got Famous

The Opening Act of Spring

Blackout (with The Sleeping Souls)

Out of Breath (with The Sleeping Souls)

If Ever I Stray (with The Sleeping Souls)

Photosynthesis (with The Sleeping Souls)