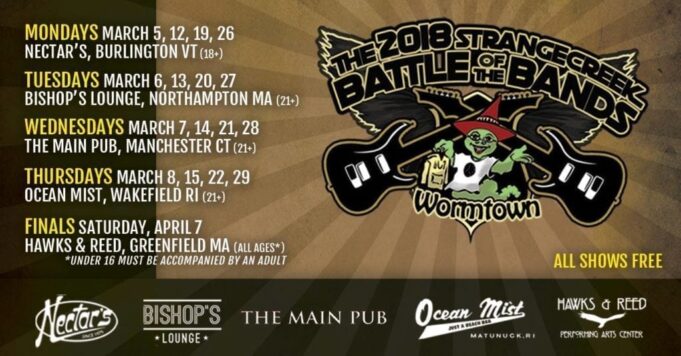 So, the regional finals for the Strangecreek battle was on last night in Northampton MA.  I was excited coming into the room as I knew that all three bands are great and that we would be in for a helluva show. When I got there Fiesta Melon was sound checking Elvis Costello’s Angels Wanna Wear My Red Shoes. So I did my best Elvis impersonation to sing along as they were testing the sound.  After a break to make sure that diners downstairs weren’t blasted out of their dinner chairs the battle started around 9:15 PM. Fiesta Melon fired up a great one hour set that included mostly FM originals plus a few tasty covers.  I wasn’t surprised by either cover I recognized, Phish’s Wilson – Punch You in the Eye,  and a Steely Dan cover.  The rest of the set ranged from progressive compositional jam band flavors to a bit of the quirky almost 80s style pop into prog originals.  The individual musicianship is excellent, and all three front guys (keys, guitar and bass) sing often all together for a nice full frontal vocal assault.  Could we have a winner here?  They certainly are deserving of the Northampton crown. Full audio of the Fiesta Melon set, use the arrows to toggle between songs.

Up next came Long Arm Rex who hail from the Boston area and are mixing a variety of styles within the reggae and ska universe.  The band is a five piece with drums, bass, keys, guitar and a dedicated singer.  The influences range from the roots of reggae and motown / doo wop all the way to modern what I call progressive Cali reggae.  The set was mostly originals with a No Diggity cover in there and a great version of Earth Angel that morphed from doo wop to bouncy 80s ska.  The band had a great high energy level, movement on stage, and a look and vibe.  At one point the guitarist broke out a classical guitar for an interlude and somehow in 60 minutes the band was able to bang out some 15 songs or so. They were great,  could this band take the crown? Full show audio, use the arrows to toggle between songs

Up last, Yookeroo, winners of week number one.  The band is from the area and are a band that morphs from four to five pieces when occasional singer Sam jumps into the fray.  When it’s a four piece they are a progressive compositional jam band morphing from Phish to Dixie Dregs to Joe Satriani with deft skills and dexterity all around.  In particular their lead guitarist Desmond Cornetta is really an amazing talent, what I call a stunt guitarist.  There were moments throughout the show where his incendiary licks were simply awe inspiring.  The band is excellent, and I recognized a classic rock cover (Traffic?  Blind Faith?) and then late in the set did a highly upbeat Zeppelin cover of The Song Remains the Same which was the highlight of their set for sure. Another highly talented band who put on a great set.  Could they take the crown? Full show audio, use the arrows to toggle between songs

So this is where it gets tough –  all three bands were great, talented, fun and a perfect fit for Strangecreek.  Now what?  So I deliberated, got some input from Strangecreek and Wormtown veterans, got a feel for the crowds.  Since none of the bands brought more fans than any of the others, that wasn’t an accurate gauge.  Since all bands got really great support from each other and roughly similar reaction to the tight crowd that was there, that didn’t help me that much, either. I think that the final decision was not based on what would fit right into Strangecreek as one of yet another band that may be similar to others there.  But what band might stretch things a little bit, challenge the Worm listener, to bring something to the show that maybe is under represented.  Given that, the very hard decision to make is that the band moving on to the finals on April 7 in Greenfield MA is Boston’s Long Arm Rex.  All three bands are great, and I would not hesitate to recommend any of them to any promoter or fan who wants a great show. See y’all in Greenfield either on April 7 at Hawks and Reed or Memorial Day weekend at Camp Kee Wanee for Strangecreek Campout.