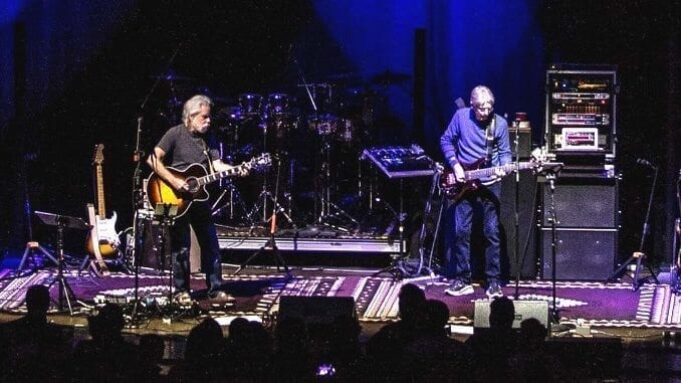 The Bobby and Phil duo tour continued with a night at the Wang in Boston, MA.  The theater is ornate and an intimate setting to bring a couple thousand Deadheads while the weight of a bomb cyclone nor’easter threatens the hub of the universe. As with previous shows the duo was joined by Wally Ingraham on percussion.  In the second set they were also joined by Larry Campbell & Theresa Williams who are well known to this audience for their time collaborating with Phil and Friends and others in this scene. It was a bit disappointing that so much of the material that was played on this night was a repeat of material that was played previously at Radio City Music Hall.

(Check out Sharon Budman’s review of that run here.)

From the video channel of rdeal1999

Two video screens adorned the stage on either side so audience members could really connect with the musicians. Full Gallery of Photos here:   Larry Campbell was amazing. His playing is very tasteful and he is a phenominal talent. He sounded and fit in like he had been playing with them for years. In Boston Bill Belicheck is fond of saying “do your job” and Larry Campbell does his job. From the video channel of Charlie Jenkins

The Maker, a song written by Daniel Lanois but known to this crowd because it was done by the Jerry Garcia Band- was absolutely beautiful and sung really nicely by Bob. Although the show had some really rough moments, it’s amazing to see how Bobby and Phil are so locked in together. Oteil is an amazing talent but to see Phil and Bobby together you see how amazingly they read and anticipate each other.  Much like in the entire history of the Grateful Dead, those moments where the band falls down are counter balanced by moments of true and pure beauty, as in parts of the Cryptical suite.

The Touch of Grey encore really tough, as Bobby was off on everything from singing and playing.  The audience that follows these musicians is incredibly supportive and it is safe to say that despite the difficult encore ending that the throngs who spilled out into the Boston night were very satisfied with this show and the coming together of so many people to enjoy it.