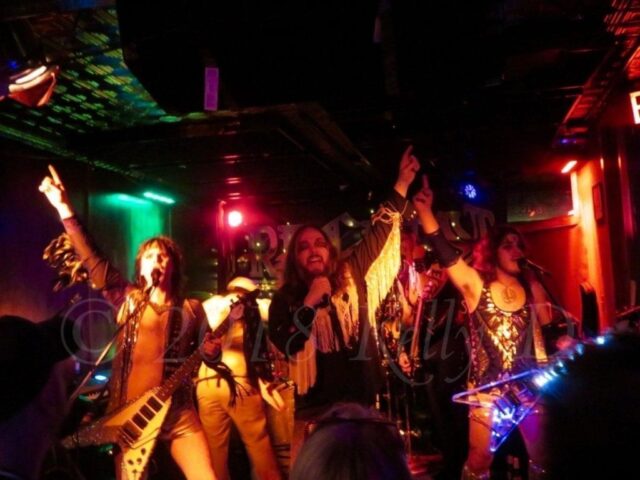 I recently had a conversation with Tragedy’s guitarist, alias “Garry Bibb,” about how gimmick bands tread a fine line between being hilarious or becoming irritating. He replied (not without a touch of indignation), “ALL bands are gimmicks. Look at Ozzy! […] He performs now as the Ozzy Osbourne who had talent!” Snap! Unlike some other metal bands who perform parodies of songs or skew the genre, Tragedy:  All-Metal Tribute to the Bee Gees and Beyond at once pokes fun at 70s disco and soft rock and 80s pop, and celebrates them at the same time. Everything is done in good fun and poor taste; the theatrics verge on X-rated and the audience becomes integral to the overall experience. Oh, and I haven’t even mentioned “Lance”- or the confetti. Full disclosure: I work for the booking agency that once got the band gigs, but beyond a couple YouTube videos and my boss’ raving about them and how awesome they are, I hadn’t really ever figured out Tragedy’s schtick. Thankfully, I remedied that this past Friday in New Haven. After a splendid meal at Claire’s Corner Copia (a sanctuary for vegetarians like myself and my companion for the evening), we hoofed it to the packed Cafe Nine. I don’t do well in cramped spaces with a lot of people (toes stepped on, shoulders jostled, etc.) so I wasn’t in the best mood when American Trash began their set. However, their stage presence and sound pulled me out of my funk. American Trash has the grunge sludge of Black Sabbath and the sleaze of Steel Panther with a splash of Led Zeppelin in the mix. They finished off their set with a roaring cover of Motorhead’s “Ace of Spades” to thunderous applause, and then it was time to await Tragedy’s ascent to the stage.

After about half an hour, a flashing-light siren and mini megaphone (again, oxymoron?) paraded through the crowd alerted us greatness was upon us. Lance, the personal towel/whipping boy of Tragedy (an inside joke in and of itself), guided the “actual” members of the band to the stage and after a shriek of welcoming those of us in “NEW HAVEN CITY” to the show, we were off to the races. “Tragedy,” the classic Bee Gees groove, transformed into a chugging anthem complete with the falsettos you would expect when one covers a Bee Gees tune. However, this version was decidedly more rockin.’

Check out Phil Simon’s review of Tragedy at Thunder Road back in 2015 HERE.

The same could be said for the next song, as they welcomed us to “Funkytown” with a blistering version of the Lipps, Inc. one-hit wonder. The throngs of people around me had thinned some so I was able to start dancing (the only way to properly enjoy “Funkytown”). There is nothing like four grown men singing “Got to keep me movin’/Keep me groovin'” and then abruptly growling “WITH SOME ENERGY!” into their microphones. The cognitive dissonance of it, and the band’s sound as a whole, is simply delicious. It just works. I was still in the back, so I couldn’t really see the band members. However, their onstage banter was on point. To wit: one of them (I still couldn’t see who) proudly announced, “NEW HAVEN CITY! We give you lube. . . And you’re gonna need it” with what I can only imagine was an exaggerated wink. The classic Frankie Valli theme song to 1978’s Grease was on the docket next. The song is actually quite existential if you listen to the lyrics, which the original disco styling doesn’t quite convey. In metal version, though, it became almost too perfect:

This is the life of illusion Wrapped up in trouble, laced with confusion What are we doing here?   We take the pressure and we throw away Conventionality belongs to yesterday There is a chance that we can make it so far We start believing now that we can be who we are

After that beautiful disaster, I made the (right) decision to move closer. I went and joined my friend with about three people in front of me. Muuuuch better. I could finally see the men of Tragedy in all their glittery, sweaty glory.

This is the current lineup of Tragedy, as written on their FB page:

Disco Mountain Man — lead vocals, lead keyboards, lead cowbell
Mo’Royce Peterson — lead vocals, lead rhythm guitar, lead lead guitar, lead back-up vocals
Andy Gibbous Waning — lead vocals, lead bass, lead back-up vocals
Garry Bibb — lead lead guitar, lead back-up vocals
The Lord Gibbeth — lead drums
Lance — lead towel boy and complete idiot Each do not take this position of “member in the #1 party band” lightly. The “brothers” were wearing more makeup than me on any given night and if you know me, that’s really saying something. Glitter covered every inch of exposed skin on their upper halves. The rest was all metallic leg warmers, drawn-on symbols in lipstick, sweatbands, fringe, jewelry, and more eyeliner than a cosmetics section at CVS. I was enamored. And what of the setlist?! As they’ve added “And Beyond” to the band name, the parodies have stretched beyond lovingly mocking the brothers Gibb. Nay, no one in the 1970s or 1980s pop-rock zeitgeist is safe from the tribute that is Tragedy. In the span of 90 minutes, we heard renditions of John Denver’s “Country Roads,” Neil Diamond’s “Sweet Caroline,” and “Baker Street” by Gerry Rafferty, the first two of which were sung heartily as much by the audience as they were by the band. I noted that the Red Sox-influenced additions in “Sweet Caroline” still occurred in New Haven, which I would’ve considered Yankees territory. https://www.youtube.com/watch?v=nLpVIJN311o Other highlights: the “It’s Reigning Men” (sic) part of the show where there not only was a ritualistic circle formed on the miniscule stage, but also a menacing chant of “MEN. MEN. MEN” to really seal the deal. Lance simulated pleasure on a large blow-up doll during Rod Stewart’s “Da Ya Think I’m Sexy?” and peppered the crowd with glitter and confetti, sometimes with his hands, other times with a gun. (Not a euphemism.) Even the anecdote of the “haunted bar” (don’t ask), where Disco Mountain Man reassured the bar ghost (again, don’t ask), “‘Yes, Admiral Nerf Cock, we ARE gonna play one deep cut for you.’ And then I whispered into my cupped hand, ‘This- is- “STAYIN’ ALIIIIIVE”‘!” As one might expect, that song went over well. Disco Mountain Man smiled at us and said magnanimously, “No applause necessary. We know that was awesome.” https://www.youtube.com/watch?v=U7sDzIr4ZpI After ending the set with His Purple Majesty’s “Little Red Corvette,” which in and of itself was killer, the band left Lance to his own devices. Literally. After noodling on a tiny Flying V of his own (this is surprisingly not sexual innuendo), the band came back out and demanded that women in the crowd get onstage. They picked about eight before Disco Mountain Man saw me, pointed at me, growled “YOU,” and led me up as the band began a cover of Rick Astley’s “Never Gonna Give You Up.” As I mentioned before, the stage was about the size of a postage stamp. Add approximately eleven women to the mix of six sweaty gentlemen and it gets a little suffocating. So much for alleviating my earlier claustrophobia! However, I did what I do best- I documented the experience. See below, including the moment when my glasses lens fell out my frames onstage and I might’ve- just might’ve- simulated oral sex on Mo’Royce’s Flying V. A spirited version of “YMCA” ended the evening’s events, but not before “lead drummer” the Lord Gibbeth got his foot stuck in the milk crate that served as a makeshift step and had to use me as a crutch to get it off.

I can’t stress enough how epic this band is, as well as its ethos. To put it simply: if you don’t enjoy at least the concept of Tragedy, there’s something wrong with you as a person. The end. 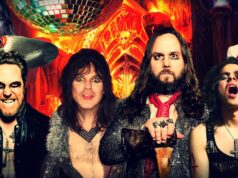 Tragedy: All-Metal Tribute to the Bee Gees and Beyond to Play New Haven on Friday, February 16th

Live Music News & Review was born out of a love of live music and the wish to chronicle the amazing shows happening around the country. Stories and reviews are born both from our editorial board and from readers just like you around the country.
Contact us: lmnandr@gmail.com
5,793FansLike
209FollowersFollow
293FollowersFollow
8SubscribersSubscribe

Tragedy: All-Metal Tribute to the Bee Gees and Beyond to Play...