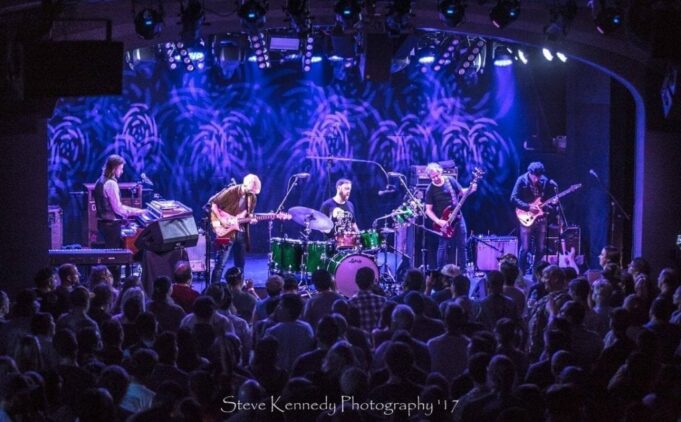 Check out the full gallery of photos from these shows by Steve Kennedy here at our facebook page.

Joe Russo’s Almost Dead finally made their first appearance in Southern California on November 9th and 10th 2017. When these shows were first announced it immediately created a buzz around the SoCal jam band community. Not only because they have not played around these parts ever, but because of the small venue had they announced the shows in.

The Teragram Ballroom, located in Hollywood, is a relatively new venue that opened in May of 2015. The cozy room only holds about 750 people leaving those who scored tickets during the immediate frenzied sell-out feeling very lucky.  Speculation was many of the larger venues in the area had already been booked at the time of the JRAD decision to play the LA shows leaving Joe Russo to reassure the crowd that they would be back. Given the success of this run and the overwhelming demand for JRAD shows in Southern California maybe larger venues or multiple venues over a longer tour stay may be in order for Southern and Central California.

The anticipation for JRAD show #128 was frothing and the energy created by the excitement was palatable as they took the stage right on time at 9:02 and eased into a Weather Report Suite/Part One>Truckin’. Next came an inspired Jack Straw followed by and a nod to California by playing Estimated Prophet. The first guest appearance came when Joe announced Johnathan Wilson, who opened for and played with Bob Weir during his solo acoustic tour and also sat in on shows with Furthur when they played the Greek LA.

Johnathan strapped on a worn Fender Strat and joined in playing Pink Floyd’s Money leaving the intimate crowd joyful and thankful. They closed the first set with one of the highlights of the night a full Terrapin Suite. It was a thrilling, well balanced, intricate rendition showing off the bands ability to create an atmosphere of sense and color.

The second set kicked off with Dancin’ in the Streets followed by Brown Eyed Women which had the crowd singing along with the chorus. Next up was Throwing Stones played with an emotional edge, it’s a song which has seemed to garner a deeper meaning with current political climate. He’s Gone featured wonderful jamming and fun sing along segments as they maneuvered into The Wheel and beautiful solo interlude by keyboardist Marco Benevento. The Wheel reprised then lead into the show closer Let It Grow. The encore featured the return of Johnathan Wilson and keyboardist Eric D. Johnson from Insects and Robots. A short jam lead into West L.A. Fadeaway followed by a beautiful Brokedown Palace.

The stage was set for night two of the much anticipated Friday Night show #129. A quick check on the aftermarket ticket sites yielded sales ranging from $80 to $150 per ticket with very limited supplies. Once again the show started on time just minutes after 9pm.

After a short jam to ease into the show JRAD kicked into Cumberland Blues followed by Music Never Stopped. During the Music Jam they slid back into another clearly pronounced Pink Floyd Money jam, a song they played the night before with Johnathan Wilson and drifted back into the Music Never Stopped reprise. The jam lead into a crowd rocking Bertha followed by wide open version of Viola Lee Blues.

The band slowed the mood and all eyes turned to Tom Hamilton as he delivered a soulful Wharf Rat and closed the first set with the LA faithful signing and clapping along to love is real Not Fade Away. With the house packed and locked in, the second set roared into Good Lovin’ followed by Bob Dyaln’s Silvo which really set the pace for the rest of the second set. Next up JRAD dialed up a fan favorite Rueben & Cherise which drifted seamlessly into an Eyes of the World- yep the boys were on fire playing the early 70’s Eyes ending jams and then kept the pace going whipping into the Other One and a monstrous set closer Shakedown Street.

Seemingly on point at every turn, the boys capped off the incredible two night run in Los Angeles with a heartfelt song to fill the air,  Ripple. JRAD threw teases, twists and turns throughout the two night run only a combing over of the official set list and future release of audio files can fully reveal.

It is obvious to see why Joe Russo’s Almost Dead it garnering so much positive attention. Their popularity will continue to grow as more and more fans are exposed to the live JRAD experience. The band’s chemistry is undeniable, drummer Joe Russo, bass player Dave Dreiwitz, and keyboardist Macro Benevento are constantly creating a rhythms in the pocket that allow guitarists Scott Metzger and Tom Hamilton soar into places of exploration and riffing excellence. The musicianship is a well-crafted blend of light, fun experimentation as well as a studied and true approach to cover one of the greatest bands of all time. The fans understand the layers nuance the music brings and appreciate the dedication to delivering it at every turn.

Joe Russo steers the bus on a wild ride, through gliding descending roads to accelerated rocket ship like ascending white knuckle rides that leave a smoking crater in your mind. The Teragram Ballroom turned out be a great host for the first Southern California JRAD shows, offering a high quality sound system, short lines at the 3 bars and friendly staff. Joe said “they would return” and this part of the country will be savoring the moment. How long locals have to wait, where they will play, and how much they will jam in the area will be fodder for the anticipation of JRAD’s return.

SET LIST NOVEMBER 10: Cumberland Blues The Music Never Stopped Money Jam Bertha Viola Lee Blues Wharf Rat Not Fade Away Good Lovin’ Silvio Rubin and Cherise Eyes of the World The Other One Shakedown Street Ripple To submit a story or to just say hello, email us at [email protected]

Check out the full gallery of photos from these shows by Steve Kennedy here at our facebook page.