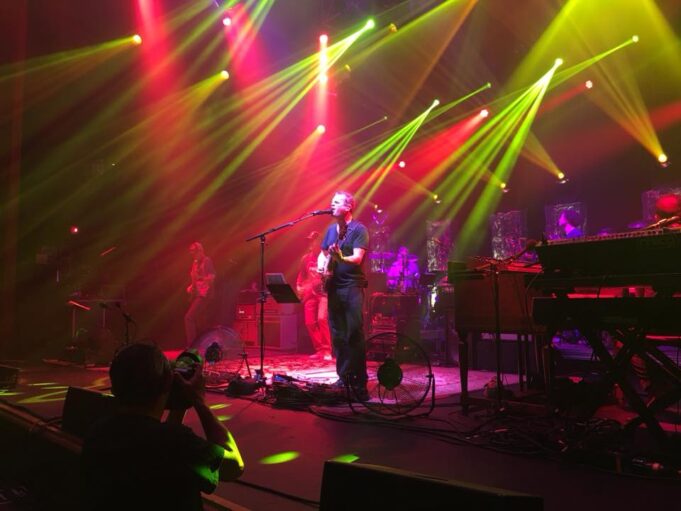 From the moment you walked into the hallowed Capitol Theatre on Saturday Oct. 21 you could feel in the air that something special was about to happen.  The pre-show energy was already heightened from the show the night before. “You should have been here last night, the boys were on fire!” had been overheard numerous times circulating through the crowd. Having personally seen them over 50 times I completely understand what was about to happen. The lights dim, the floor of the Cap is starting to fill with a slightly larger crowd than I’m used to before the opening band starts playing. Space Bacon has now taken the stage. After the first few notes I now understand why the crowd is as big as it is so early. These guys know how to play. Space Bacon is a rock/electronica/fusion/jam band out of Brooklyn, NY.

Having a breakthrough year in 2016, playing bigger venues and the release of their album Nodes, they are a band with an extremely bright future. They started their show strong and ended it even stronger. As the last notes ended the crowd went nuts and rightfully so. They played as if they had their lives depending on it. The energy of the crowd has now lifted to another level. As the band leaves,  the road and Capitol crews attack the stage like a Formula 1 pit crew.  Pedalboards start arriving. A familiar guitar is now being tuned by the guitar tech. Microphones are now starting to be put into place. The energy in this place feels like it’s about to explode. Everything is now ready. The lights dim again. The crowd hushes. It’s time! The first few notes of the opening song “Flamethrower” start. The band is now onstage but still in darkness and intro plays. The lights start, we are off and running. Umphrey’s McGee has announced their presence with authority.

From the video channel of mkdevo, an intimate look at the vantage point of the lighting designer, Jeff Waful.

Coming up on their twentieth year as a band and well over 2000 shows, Umphrey’s McGee is a progressive/electronic/rock/jam powerhouse. With some of the best musicians on the scene today. Starting in the early years in South Bend, Indiana as students at the University of Notre Dame. As the initial momentum and adding new members as time went on the band relocated to Chicago and established their roots. Now with a solid home base the touring started reaching out to further expanses and their reputation as a band were ever growing. Over time and touring they honed themselves into the band they are today. As the notes of “Flamethrower” ended they segued into the crowd favorite “Ringo” and they were off on their nonstop musical adventure. They have a tendency to play solidly for anywhere 15-30 minutes right from the beginning until they take a second to say “hi” to the crowd and jump into the next song. Tonight they were feeling the energy of the crowd and were giving it right back.

Band members: Brendan Bayliss- guitars/vocals,Ryan Stasik – bass, Andy Farag – percussion, Kris Myers – drums, Joel Cummins – keys, and Jake Cinninger – guitar/vocals seem to have the ability to read each others’ minds. They flawlessly weave in and out of each song and extended jam. They even throw in a few teases. During the staple “In The Kitchen” they had a couple of minutes of Chicago’s “25 or 6 to 4” thrown in the middle.

Another mind blowing moment was when UM covered Radiohead’s ” The National Anthem” played to its perfection. They played two long and solid sets of about an hour and a half each with an encore of “Bad Friday”. In my personal opinion, it was an amazing Saturday. Umphrey’s McGee once again came through. They put on an amazing light show to coincide with their phenomenal music drawn from what seems like a never-ending catalog. They played for a crowd with very high expectations due to the show they played the night before and they didn’t disappoint.