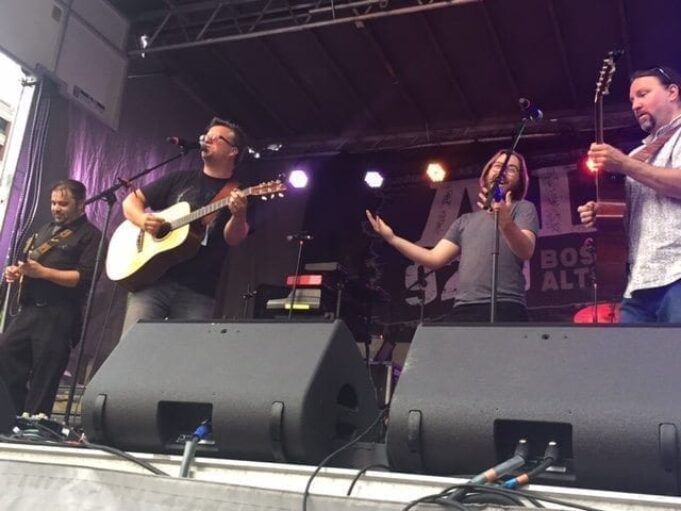 Support for a National Headliner, The Revivalists Steve Benson, with the Chad Hollister Band. Copley Square  Boston MA August 17 2017 by Steve Benson Photos by Julie DiCello   To submit a review or story for consideration hit us at [email protected] Check out the Live Music News and Review.com Facebook page for updates and announcements.   August 17, 2017 started out like most days. It did not end like most. I wound up in Copley Square in Boston MA supporting one of the fastest growing bands in the US, The Revivalists.

They are a  seven piece band out of New Orleans, LA. The Revivalists are riding a series of #1 hits from 2016 on the Billboard Adult Alternative Charts and are fast becoming international rock stars. As I love to read about other people’s experiences, I thought I’d share my story on LMN&R. I’m a multi-instrumentalist, stage and studio as well as a booking agent and I’ve played in a lot of bands. Currently, I play bass, mandolin and pedal steel with rice- An American Band.   I am also forming my own Irish Tribute Project, The Ub’ Sessions and on that I played with the group I’ve been in the longest, The Chad Hollister Band.  Hailing from Vermont, Chad Hollister Band has been touring nationally for years and recently signed a deal with Pacific Records. Chad was kind enough to ask me to join him. The event was sponsored by ALT radio 92.9 FM. We have worked with this great radio group before, many of my national support slots have come from Chad and 92.9.  My biggest worry is parking and getting my gear where it needs to be. Fortunately, Adam Klein of Callanan & Klein Communications was there to meet me and the band and rock star parking was mine! Our good friend Brett Shuttleworth opened the show. He’s been doing some dates with Chad and I had the good luck of getting to jam on some of Brett’s tunes in the past,  keep an eye out for him. Money ain’t everything is my favorite Brett tune, I’m betting the world will dig it too. Check out Julie DiCello’s gallery of photos here. Next came my set with Chad Hollister (Guitar & Lead Vocals) and Primo (Jeff

Poremski lead guitar & vocals.) I was on Mandolin and Pedal Steel. We had a great time playing to a big crowd on a huge stage with a big sound system. One more thing the Revivalists keys and horn player Mike Girardot jumped up with us and sang a horn part with us during the song Riley Odelia. The crowd loved it and so did we.  The Boston crowd was more than kind and we walked off the stage knowing that even though everyone was there to see The Revivalists, we did our job warming up that crowd. That’s why 92.9 asked us. Still the 2000+ people there could not have shown us more support. Check out Chad Hollister’s Stop the World album here. The Revivalists hit the stage like a thunderbolt from Olympus. My wife and I were taking pictures from the barrier at stage front. The lead singer David Shaw leaped onto the speaker stacks and had one foot on the barrier.  He recognized us from back stage and gave us a wave and smile. They opened with Bulletproof and closed with A Little Help from My Friends. I must say this band deserves the success they are having.  First, they have a pedal steel player (Ed Williams), so I already like them ; ) Second, they have great songs.  The Revivalists are a fantastic band with a super blend of Americana and R&B influences with strong vocals with a very exciting front man. If you have the chance to see them you should.

SET LIST: Bulletproof You and I Stand Up Amber BTBD Catching Fireflies All In The Family Wish I Knew You It Was A Sin Criminal Keep Going With a Little Help From My Friends (a cover originally by The Beatles)     To submit a review or story for consideration hit us at [email protected] Check out the Live Music News and Review.com Facebook page for updates and announcements. 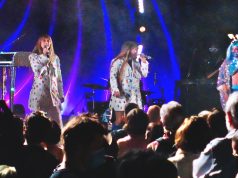