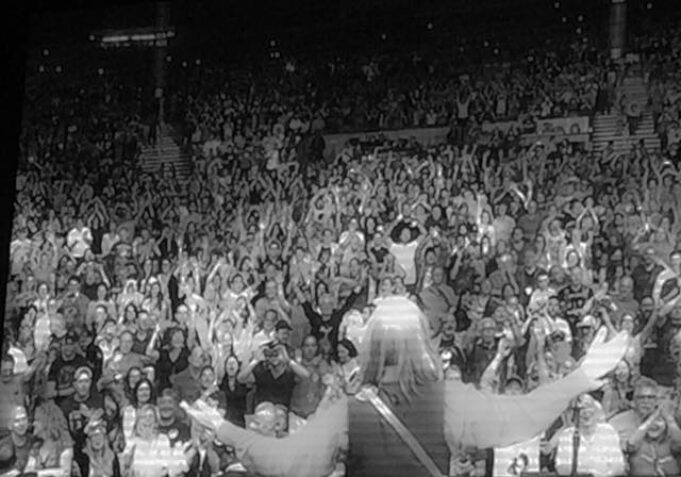 So after a week of despair, along with an MS flare, losing my wallet, I continued to push myself, and spent not even a moment worried about anything.  I got a call it was found minus any financials. So I got it back at a CT DOT garage, and received a pic of email sent to my father because I had his old card in my wallet too. Then I went to BOA, got a temp debit, and followed on the road to move on. We went to Burger King for cheap dinner, AC power for my phone, and a seat. All the while, people asking what I could do, with no ability to do anything, I kept it going, and pieced together the connections necessary. Then a ride showed up at Burger King, and we continued on to Hartford, to celebrate the evening in the meadows at Xfinity Theatre with my Joe Walsh, Tom Petty & The Hartbreakers.

Everything from acquiring the ticket, getting to the show, and then acting like I wasn’t impaired as we attempted to get to Will Call, find some friends, and wait in line to get in was tough. We were still looking for someone when a lady complained thinking we were attempting to move up in line and go in with her. Then a member of security spoke up about it being easier on the side, and we moved over got through security and in prior to the lawn opening.

So we stood at the base of the stairs, until they slid apart the metal gates allowing us to make the steep climb, that in and of itself has become tough since MS intruded on my life. I made it to the top, and continued to walk down through the lawn down to where my friend Scott was heading. When I got there it was an awesome platform deck, and turns out to be the ADA place for handicapped, allowing me with cane, and my clan, the finest seat in the house, in the sweet spot. Wow. Then staff comes out trading plastic chairs for comfy padded seats!

The place is fillin’ up, a crowd historically monumental for any day, let alone Hump Day. The techs are makin’ there last checks, then I hear drum check, then not by sight, but my ear know Joe Walsh is on the stage, and simply by a few notes on his guitar.

From the video channel of Tony Cappello

In the meadows of Hartford, Joe leads out with “Meadows”. More in tune than most even realized with all going on all around, even with those in traffic still trying to get in. All the stars aligned and continued this road of grandeur for and into this “Ordinary Average Guy” of epic proportion. And of course because it is Joe Walsh, the place is packed before ya know it, filling in tight. So many great tunes and he helped me by all accounts “Take it to the Limit”!!!   It kept on in epic proportion, remindin’ me “Life’s Been Good”, til the close of “Rocky Mountain Way”, the audience without coaxing sang loud and proud throughout.

Joe Walsh: Meadows,  Ordinary Average Guy,  Mother Says,  The Bomber: Closet Queen/Bolero/Cast Your Fate to the Wind,  Take It to the Limit,  Turn to Stone,  In the City,  Funk #49, Life’s Been Good,  Rocky Mountain Way
From the video channel of Sean Roche

A nice bit of wow continues, everyone so happy to be there. From old people in wheelchairs, to kids standin’ in unison joyfully expressing their joy out loud. Then Tom with those that lifted my heart took the stage. They immediately tell me they are, “Rockin’ Around (With You) to which I am reminded it won’t be “Mary Jane’s Last Dance”, puff puff pass. Then I look around and see some others dancin’, then I see others gettin’ by on walkers and canes into, “”You Don’t Know How it Feels”, and had my own symptomatic momentary hell that I was really struggling to recover as a “Forgotten Man”, but then Petty says to me “You Got Lucky”, providing what hasn’t hit a setlist since 1982. So much wow continued, reminding “It’s Good to Be King”, another ironic happenstance of the turn of events. So much, so fast, and all just because. “You Wreck Me”, Tom Petty & The Heartbreakers, and leave me in search for my “American Girl”

Although The Webb sisters remind me perhaps I need to spread my wings.  Great job ladies!  Flag Day rocked Hartford!

set list by Scott Medeiros: Tom Petty and the Heartbreakers: Intro,  Rocking’ Around (With You) Last Dance With Mary Jane You Don’t Know How It Feels Forgotten Man You Got Lucky I Won’t Back Down Free Fallin’ Walls Don’t Come Around Here No More It’s Good to Be King Crawling Back to You Wildflowers Learning to Fly Yer So Bad I Should Have Known It Refuge Runnin’ Down a Dream Encore: You Wreck Me,  American Girl From the video channel of Nick