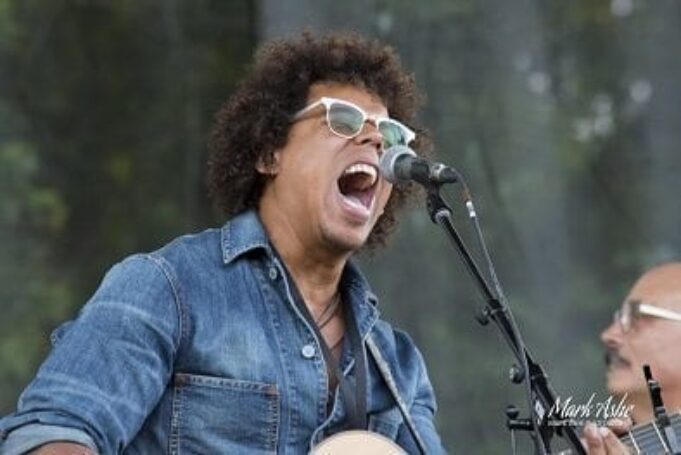 Joe D’Urso’s fourth Annual Rockland-Bergen Music Festival made another star-studded return to picturesque Tappan, New York on Saturday. Joe D’Urso, the founder of the festival and lead singer/songwriter of his band Joe D’Urso & Stone Caravan had a perfect weather day for the fans that turned out to see thirteen acts performing on two stages. Among the performers of the festival were John Cafferty & Beaver Brown, Christine Ohlman & Rebel Montez, Jake Clemons Band (see the video below), Jeffery Gaines, Joe Grushecky and Steve Forbert. On the “Glow-Seeger Stage” were full band performances and on the “Mr. Lou/Stefan’s Turning Point Stage” were acoustic and slimmed-down versions of bands. This being D’Urso’s fourth festival, he and his staff had the festival running like a fine-oiled machine. When one act was finished on one stage, the next act started right up on the second stage. Sets were generally forty-five minutes, so the audience was treated to tons of “best of” from the bands.

John Cafferty & the Beaver Brown Band were probably the biggest name to the festival and they didn’t disappoint. Cafferty is the singing voice of Eddie from the 1983 movie Eddie and the Cruisers. Beaver Brown had a chart-topping hit “On The Dark Side” released from the movie. “On The Dark Side” was performed as the second song of the set and from that point on, the crowd was completely into the band. Among the songs John Cafferty & the Beaver Brown Band played were “Go Where The Action Is,” “C-I-T-Y,” “Voice of America’s Sons,” and “Tender Years.” Joe Grushecky of the Iron City House Rockers, played rhythm guitar during the entire set. Cafferty seemed amused that Grushecky knew all of the chords to the songs. Joe D’Urso & Stone Caravan’s set was like an old homecoming where everybody knew every word to every song.

D’Urso grew up in the same town as the festival and there were plenty friends and family on hand to lend support to Stone Caravan, even though none was needed as D’Urso and the band played a passionate set. Joe D’Urso & Stone Caravan opened up with a Willie Nile’s penned anthem “One Guitar.” Usually a set-ender or even an encore song, but having “One Guitar” open the set really got the crowd jumping.   Christine Ohlman & Rebel Montez, a New Haven, Connecticut-based band, gave a spirited performance. Christine Ohlman is known affectionately as “The Beehive Queen,” due to her incredibly high platinum beehive hair. Jake Clemons Band featured Jake Clemons from Bruce Springsteen’s E Street Band as theofficial headliner.

Clemon’s the multi-talented saxophone player also played guitar, keyboards and sung lead vocals. On the smaller “Mr. Lou/Stefan’s Turning Point Stage” most of the performances were acoustic. Hollis Brown, being one of the exceptions had an electric piano and electric guitar in addition to an acoustic guitar.

Hollis Brown is normally a five-piece band, played a stripped down version of the band. Hollis Brown was the opening act for Counting Crows and according to the lead singer Mike Montali, “We had to play ‘Ride The Train’ every show as it was one of the favorite songs of Adam Duritz of The Crows.” As the song was being performed a train passed behind the band with its horn blaring, drowning out the band. It was very funny and fitting. Not sure if the band liked the train interrupting their song. Joe Grushecky performed a true acoustic set with guitar and harmonica as did Steve Forbert. Forbert had at least a half dozen harmonicas with him, almost one per song. Among the songs that Forbert performed were “Complications” and “Romeo’s Tune,” his big hit from 1980.

In addition to the music, several charities were on hand including Why Hunger, Light of Day Foundation and The Dan Sullivan Foundation. The Rockland-Bergen Music Festival mission is to bring great music to the beautiful areas of Rockland and Bergen counties area while raising awareness and consciousness of many organizations that are doing great work in various fields of health and humanity and have them be discovered and supported by music fans. Joe D’Urso’s fourth Annual Rockland-Bergen Music Festival was a wonderful laid-back festival showcasing amazing musical acts. The enthusiastic crowd was small and it would be great for the festival to keep building on past years, making the festival better every year.