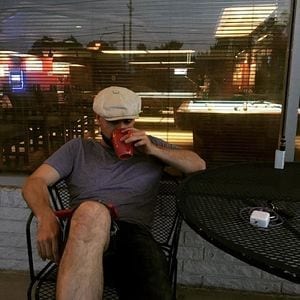 An interview with Tom Hamilton

The huge gallery of photos of Catskill Chill by Karl McWherter is here.

Guitarist and songwriter Tom Hamilton was right at home this past Catskill Chill, delivering on a multitude of sets, from his own band American Babies, to his work on Biscuit material with Electron, to sitting in on other performances all over the festival. Just after his Babies’ set and just before he took to main stage to headline with Electron, I had the pleasure of sitting down with him for a few minutes, to talk about everything from his American Babies album released earlier this year, An Epic Battle Between Light and Dark, to getting older, to why the Grateful Dead mean so much to him. Check it out below:

Tom: So what’s up, man? What’s going on in your world?

LMNR: In my world? Actually, speaking of my world, it’s cool to be here to see all of the Bridgeport musical peeps, that we have from there, from Kung Fu and Jen Durkin and all those guys sitting in, it’s just cool to see. I love going to their sets and supporting.

T: It’s great, isn’t it? This is your first Catskill?

LMNR: This is my second, I was at the last one. I caught your Babies’ set there last year, and I caught the end of your set just before-you guys sounded like you were on fire.

Tom: Yeah man, we’re feeling good. We feel like a band, ya know? I’m in a zone, I feel good…with all the bands I’m playing with, everything just feels good. And, everybody I play with, we all listen. And that’s when good things happen. It’s like, listen, shut up, and wait for your moment. I’m fortunate enough to get to play with people that all agree. Babies, Electron, JRAD, it’s a good crew. It’s cool.

LMNR: Absolutely. So…I was looking around some interviews you’ve done recently, and I was reading up on your new album. I got the sense that you wrote a lot of it out, and were figuring the songs out, with just a couple of guys first, and then sort of brought it to the Babies’ lineup?

Tom: Yeah, yeah. I have this guy with a studio in Philly, this guy named Pete Tramo. And yeah man, we kinda went in with no road map, and just just started making some stuff. Tapping on things, just trying to figure out sounds and feelings, and I watched…a lot of the record was inspired by film, and HBO stuff, like True Detective. Like, the really serialized, long-form story-telling stuff…and we were digging, just digging. Trying to find something that didn’t feel like, “Oh that feels just like that.” And, we kind just locked ourselves in a studio for awhile, and worked some stuff out.

LMNR: That’s awesome. Well, speaking of film, I have watched a couple music videos of songs that are on Epic Battle. Do you play director with those?

Tom: The live action stuff, yeah I edit and direct all those videos. The animated one was a buddy of mine, this guy Josh Clark from the band Tea Leaf Green. He’s not just an amazing guitar player, but a wonderful artist and animator, as well. He did the “Fever Dreams” video.

LMNR: Oh really? Nice. The one I saw the other day was, “What Does It Mean To Be?”

Tom: Yeah, it was cool, we were kicking’ around ideas for the video, and it kinda just came to me. So the song, its kind of an existential thing…and I just thought about how funny it is, how, you talk to older people and it’s not like they’re like, “Oh, I’m 60, I’m a different person all of a sudden. I’ve spoken with a lot of people my parents age, and they all say the same thing: Up here (pointing to his head), I’m still twenty years old! It’s just time is kicking my body’s ass, ya know? In my head, though, I’m still your age!

And so I wanted to make a video of that-these two guys that are still kids, even though they’re 60. They still kinda hang out, and go on blunt cruises, and do their thing. And I was like, “Dad, can I make a video of you and John smoking pot?” And he says, “Are you gonna provide the pot? Then yeah.”

LMNR (laughter) : Well that’s the thing you can control. Your own mentality, you can change that until the day you die, but nature that’s-when nature says your time is up, that’s it.

Tom: And he’s fine! Like mentally, he’s totally fine. He can talk as intelligently as anything going on in the world as can about the great depression. He was born in 1916, bro! That dude had a horse as a kid, not because he had a pet horse, but because that was his utility!

LMNR: And it’s just happening all the time. You don’t really know how to prepare for getting older, all the time–

LMNR: You might as well, in your time of youth, be one of the great guitar players of your time.

LMNR: Well I’m huge fan, especially of Electron. How are you feeling for your set, psyched up?

Tom: I am, I’m psyched up. I’m stoked. It’s kind of like a tradition at this point, at the Chill here. We do Babies and Electron every Sunday. It’s been like that since the third or fourth year. So yeah, I’m ready to get out and dig into those tunes, and close this thing down, ya know?

LMNR: It’s an awesome thing. Okay, so, American Babies…they’re cool because, in a really unique way, it bridges a very truly Americana world with what people would call your jam world. So I wanted to ask you, in that Americana world, who are some of your biggest influences?

Tom: Well, you know, the Grateful Dead. The Dead are the…ultimate example to follow.  And, the reason the Dead will be around for a long freaking time-it’s because of the songs. Plain and simple. Those songs, they transcend everything. They are timeless slices of America. You know? It’s like a freaking Kerouac book. You take away the dancing bears, and the steal your faces, and the tie dye, and the drugs and the jamming, and all that window dressing, the real meat and potatoes of that band is that they have one of, if not the best, songbooks of Americana music.

So you have that, and on top of that, you can take those songs, and do whatever you want with ’em. Well, that’s the goal, man. And that’s what I try and do with the Babies. You know, I love improvising, I love jamming…but at the same time, there needs to be the meat and potatoes there, the songwriting. The song’s gotta mean something, otherwise what’s the f-ing point?

That’s the model that I’ve had my entire life. It’s always been that, that has been the model. The Dead and the Allmans. Great songs, and then when you get on stage, do whatever the hell you want. And my old band, Brothers past, that was our mission statement as well. The songs first, that’s gotta be the thing. And any project I’m in that I’m a contributing writer for, that’s my mission statement: Like Electron, that’s not my band, I’m a side guy. Those are not my songs, and I’m just here to help Marc, I’m here in a supporting actor role. But with the Babies, and back with Brothers Past, it’s like, if I’m writing the tunes, we’re gonna make sure that they’re good. And that we’re playing them correctly.

And it’s also fun with the Babies, because I get to play all of my tunes-songs under the name of American Babies, and songs from my Brothers Past days, Grateful Dead tunes, whatever.

LMNR: And those guys are adaptable, that jamtronica feel you guys can really pull off welll, but then you got the core-

Tom: Well, if everybody’s on the same page, then that’s the fun of it. But this is a good band, man. I’m really lucky to be with the people that I’m with. I’m a lucky dude, that’s really what it comes down to.

LMNR: Well thanks for taking the time, man.

The huge gallery of photos of Catskill Chill by Karl McWherter is here.