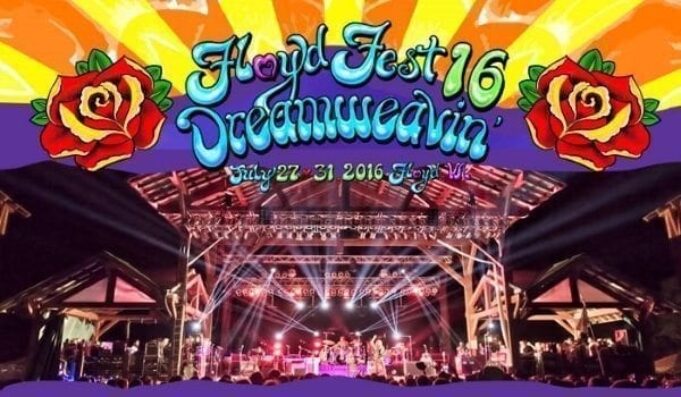 This was second time down in the Blue Ridge for FloydFest, and it was as special a time as I remember from a few years back.

This weekend music party in Floyd, VA got its usual repeated showers throughout the weekend, but thankfully a little weather–or even a lot, in past times–has never stunted the FloydFest family’s readiness to have a truly magical festival experience.

The first night, both Railroad Earth and Nathaniel and the Nightsweats rearranged their set times and location a bit due to some rain, but still each gave very strong headlining performances for the first main night.

There were circles of people the next day talking about how heady and psychedelic Railroad’s set was. I made sure to catch them and was given a couple beautiful jams, first between “Potter’s Field” and “Lonecroft Fairwell” and then again between “Tube Mirum” and “Warhead Boogie.”

Friday evening had three unique, but equally powerful set from Shakey Graves, The Wood Brothers and Nahko and Medicine For the People. Shakey, I was glad to see, got a huge crowd, and really bowled them over with his fearless passion and zany character.

The Wood Brothers might be a band, in particular, that every music lover should see at least once. Skating their way gracefully between extremely rich, sophisticated playing and downright rock n’ roll fury, the Wood Bros. leveled over their crowd with their sheer raw talent.

Nahko and the Medicine for the People, unsurprisingly, brought a huge swell of fest goers to their headlining set, and they delivered for their part. The energy from them boiled up quickly, and through a set of up tempo dancing ragers, didn’t dissipate in the slightest.

The next night, Warren Haynes, and his whole band really brought it hard, to easily stake claim for best set of the weekend. His current Ashes and Dust lineup features some downright stellar musicians, like the bombastic Jeff Sipe on drums, and wonder kid Ross Holmes on fiddle. Starting off with some original Ashes and Dust material, Haynes’ set quickly delved into a number of crowd-pleasing covers, such as “All Along the Watchtower” and a Radiohead double in “Karma Police>Paranoid Android>Karma Police.”

Probably to cope for the unfortunate absence of his Allman friend, Haynes led Ashes and Dust also through some terrific, improv-heavy versions of Blue Sky and then Jessica.

While we were all missing Greg, Leftover Salmon and Keller Williams led an fantastic, multi-faceted somewhat impromptu jam session with help from the likes of Larry Keel on an extra axe, the T Sisters singing backup and Bonnie Paine on washboard, some horns from Monophonics, and more.

The set moved from the gooey jammy, with great versions of “Born to Be Wild” and “Franklin’s Tower,” to the outright bluesy rocking as with tunes like “Nobody’s Fault But My Own.” Salmon, too, paid a little tribute to Greg and encored with a thrilling “Whipping Post.”

Specifically, the Speakesie beer tent and the Pink Floyd Beer Garden stage were the places to be late at night, with set after fiery set from the likes of Con Brio, Monophonics, Mingo Fishtrap, Pimps of Joytime and others. This last band I and a few many other fest goers caught at their additional, also impromptu secret set at 2am, and had a rowdy great time.

And there must be mention of all the upcoming talent FloydFest gives a platform for, with their On The Rise competition category, in which bands get votes for best new group.

I personally caught sets from newcomers Dalton Dash, who do a rousing version of Dylan’s “Isis,” and the very enjoyable reggae group Feel Free.

Sunday things were flowing down to a steady ease, but the music wasn’t the least in awesome by far. Keller gave a few more top notch sets with both the Keels and More Than a Little, while Greensky Bluegrass, Love Cano n and Dustbowl Revival won new fans over.

Finally, the one and only Bruce Hornsby rounded this shining weekend with a mighty fine set with his Noisemakers. The band burned through a number of staples in “Jacob’s Ladder,” “White Wheeled Limousine,” and “Sunflower Cat,” all with wicked solos abound.

The best part of that set though we’re the couple of breathtaking tunes featuring Hornsby on the Dulcimer, and Hayne’s Ross Holmes, the wonder kid who is also in this group, on some great mandolin melodies.

FloydFest is one of the musical events of today, where you can really feel the great, glowing vibe emanating from nearly everybody around, all weekend long. And not just in the music–whenever you’re not meeting somebody new that becomes a quick friend and fellow dreamer, you’re witnessing other people do the same.