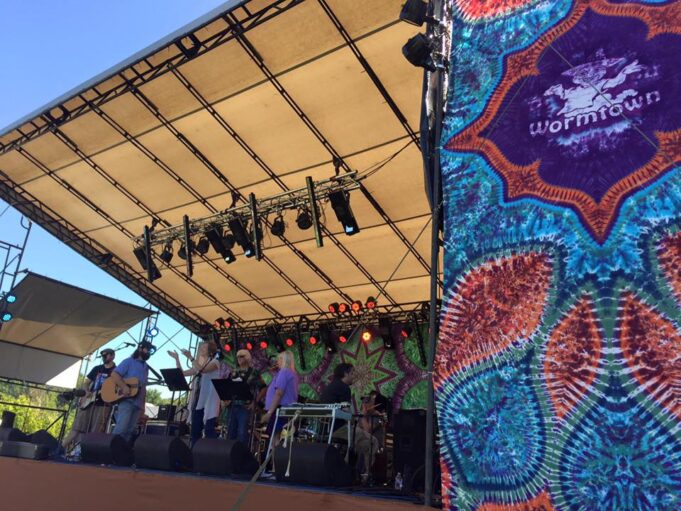 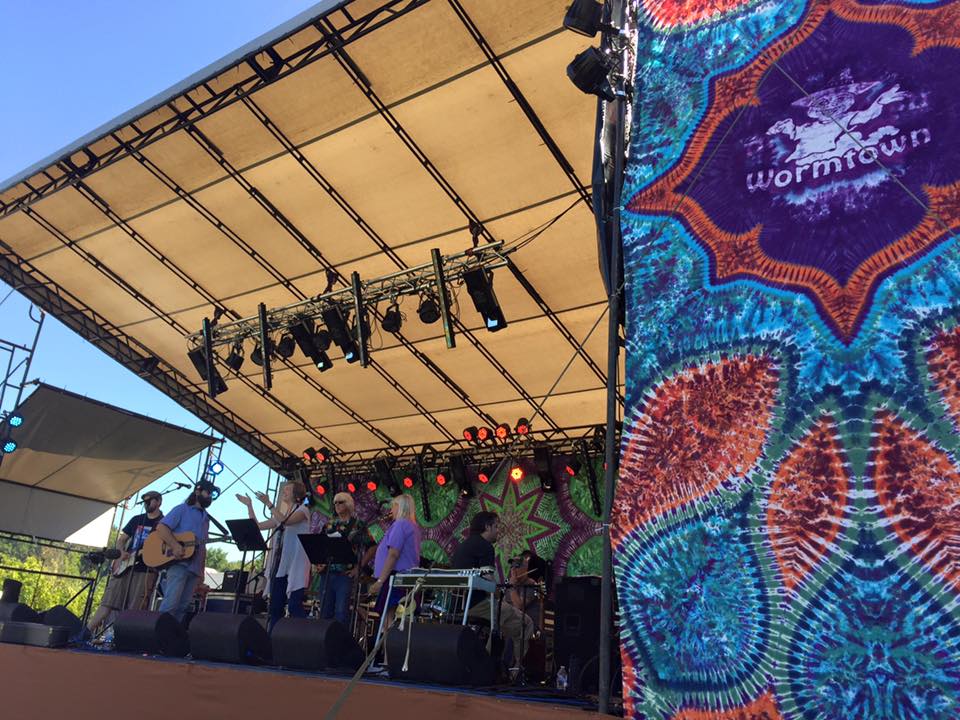 Thursday night opened at Wormtown and as usual the Worms made their way to Camp Kee Wa Nee in Greenfield and started what for some is one of the final events of the summer.  I didn’t make it myself until Friday morning, but I heard that the Lovewhip set was really well received, and that they even got a full bonus set later in the night.

I showed up really early on Friday morning myself.  The band rice – An American Band made their Wormtown premier after a summer of festivals including Strangecreek back in May.  At eleven AM it’s a little tough to get a crowd and get them going at a festival, but we went for it.  Check out the audio here:
The band was the biggest it has been to date with a full nine pieces on stage. This was the first appearance ever with the band by drummer Bart Heffner, who sat alongside Rory Walsh. Rory has a long history of drumming with bands from Daemon Chili to the Jackleg Preachers to more famous folks like Don Cherry and Freddie Hubbard. He and Bart are long time friends and drumming partners, so the two of them together was an entire rhythmic locomotive. Two singers in Courtney Parker and Patty Tuitte, two lead guitarists in Joshua Leach and Brian DiMartino (also of Llama Lasagne and Rhythm, Inc), bass player Eric Engman plus Steve Benson on pedal steel and mandolin (Steve plays with Chad Hollister and Daemon Chili and is incredibly gifted) and yours truly on acoustic guitar and vocals.

I rarely have had as much fun as I have had playing these gigs with rice, and to bring it to Wormtown, well it makes me emotional just to think about it. A highlight for me was to be able to recognize my wife Angel’s birthday from stage and present a cake while playing, truly special. These are the moments that make Wormtown what it is, the personal that meets the public. Friends, family, festival all rapped up into one. The promoters have spent a lot of time and energy to create this vibe, and they have hit a home run this year, as in the past.

We had an awesome time and the Worms were already crawling the field despite the early hours.  Directly after rice on the main stage was local folk bluegrass contradance band Gas Light Tinkers featuring Garrett Sawyer formerly of the Alchemystics, Audrey Knuth on fiddle, Dave Noonan on drums, and guitar player Pete Siegel.  Their set is a really good time, with an emphasis on Irish fiddle melodies, but with a festival oriented foot stomping good time vibe. 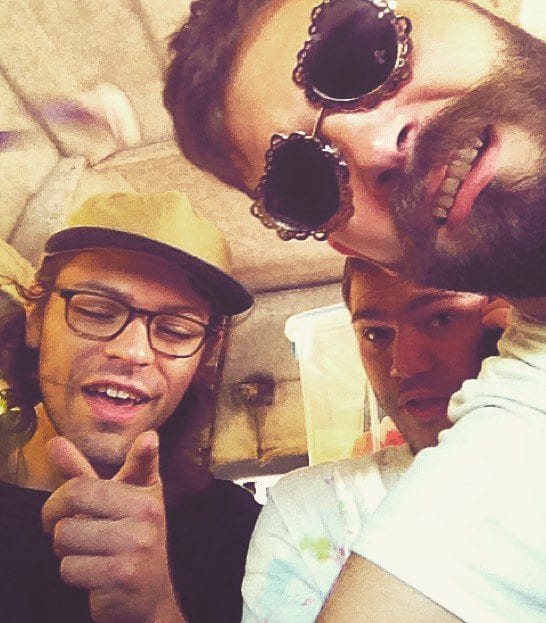 and such.  Then I wandered over to the Vernville stage to see Northampton’s Bella’s Bartok.  I’ve had the strange luck to see this band probably 5 times since March, and their meteoric improvement is something to behold.  I was struck that before work was even over on a FRI afternoon, there was a thick crowd for them at this stage.  There were a lot of people there who were singing along to their tunes, which being as unusual as they are, is not an accident, they brought their fan base.

Bella’s Bartok’s set was unusually long for Vernville, and they brought a large amount of material and style to the table.  I got the normal tunes that I expected, but also more material that I had yet to see.  As usual, while the day progressed, band members were shedding clothes until a bunch of them were bare chested and jumping all over the place.  I consulted quickly with Bill Anderson behind the sound board, worried that the light stands were shaking with all the excitement and jumping, but it became clear that there would be no disaster here today.  But sweating?  Yes, a lot of sweating.

I got pretty over heated earlier in the day so I was making a big effort to stay hydrated and rested, but at a festival, that’s tough to do.  But it was unusually warm, and I stayed in the booth for the heat of the day.  Well, okay, that wasn’t going to last because North Carolina’s Yo Mama’s Big Fat Booty Band hit the main stage.  They’ve been at a bunch of Worm events lately, but this was the first time main stage at a good time, and it was good to see them kicking down.  They had all the bootylicious funkiness that you want out of a band of that type.  There was mixed male and female lead vocals, hard hitting rhythm section, costumes, and mayhem.  Well done Booty Band,  well done.

Friday night  on the main stage seemed to really be a funky night.  Ryan’s set was funky.  Booty Band was funky. And the closer was super funky,  Dumpstaphunk.  I had wandered around and saw a few shows in the woods at Riverworm and Vernville stages, and returned for the climax of the Dumpstaphunk set.  That is a great band with a strong New Orleans heritage, but also some deep funk and jam influences and chops.  So you get the Bourbon street vibe, but you also get Haight Ashbury, and Cincinnati, and the Village, and more.  The band is led by Ivan Neville on the keys it seems, and there are more people named Neville in the band including Ian on guitar.  At one point Charles Neville, more local to us these last few decades residing in the MA hills, came out and blew some saxophone.  The Zeppelin cover Ramble On was amazing.  It seemed to me that through most of the show the band had two bass players.  The band is not really obsessed with song delivery as they are groove and funk- which is fine, it’s what you want out of them.

Sunday morning I got up early and opened the booth, and was hanging with the Worms.  The main stage fired up bright and early.  At around 11 AM I wandered over to the Vernville stage, and caught their opening with Frank Viele.  He had a great band with him and I’ve caught him at Wormtown before.  He’s been shredding up the CT music scene, and this show was no different.  His songs are really emotive, and he has a passion on stage.  The new album has tons of guests on it including Tim Palmieri (the Breakfast, Z3 and Kung Fu) and Joe Bonamassa and his touring band doesn’t lack.  Max on guitar is an absolute shredder and I really enjoyed the set.

Sunday afternoon vibes were perfect for my first listen to Giant Panda Guerille Dub Squad.  I’d been hearing about them for years and couldn’t help but notice as they took off to be a pretty big national band.  The set was perfect for a sunny Sunday, filled with mellow vibes and jams-  I don’t know if they are normally this cool laid back vibe or not, but it was great.  Hanging out in a hammock type of tunes, but also a good groove if you wanted to get the dance floor jumping.  I could hear it perfectly from our booth near the camp fire, so I didn’t venture up to the field, but I really dug it.

Reporter Lawna Lewis caught her favorite band Yarn, and sent us this review: 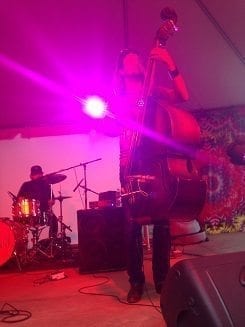 9-20-15:  It’s funny, we, the Northern Yarmy, don’t get to see Yarn very much anymore, but this September, we were able to catch three shows.  Most recently, this past Sunday at Wormtown, in Greenfield, MA.  Again, the boys had a 10 hour drive to get here to play, since they had played at the Ohiolina Festival in Mount Vernon, OH the night before.


Being a fan of Yarn as long as I have been, has it’s perks on occasion.  Like “discounts”on merchandise. I probably have 15 different Yarn t-shirts.  And don’t get me wrong, I love to support local musicians anyway I can, as often as I can.  However, this time I was lucky enough to get on their guest list, plus three.  Good thing, because, we were just about the only ones there to enjoy their set.  Unfortunately, they had the last set on the Vernville Stage, and tents are supposed to be packed up by 6:00 pm.  Their set was from 5:00-6:30, and Zach Deputy was on the Main Stage.  So if you have never heard of Yarn, you are going to go see Zach Deputy.  Last year, Yarn was on the Main Stage and Max Creek was in the woods.  Timing.  It almost felt like a private show, just for us, not so good for them.  They are used to playing for thousands of people at a Festival.

I prefer to see them in bars, because they usually play a longer set.  But even after a

10 hour drive, they put their heart and soul into an hour and a half set.  The weather was perfect.  When we saw them the week before at The Narrows Festival of Arts in Fall River, MA, they played outside in the pouring rain.  They lost power, it didn’t stop them, well for a few minutes, then the power was restored and they finished their set. They had asked me what song I wanted to hear, and I had requested “The Roadhouse Song”, which Blake Christiana (songwriter, lead vocals, acoustic guitar) wrote on a whim at a sound check at the Route 63 Roadhouse, several years ago, of course that’s when the power went out, but we were able to hear most of it. It was all good, but a bit soggy on the ride home.

As usual Zach Deputy closed it out on Sunday evening.  Instead of his normal set up though he had a full band and it was killing.  They mixed elements of jam, funk, calypso and reggae.  I’m not positive about all the band members but I saw Bill Carbone and Jay Stanley up there, and tons of other characters.  Ryan Montbleau jumped up at one point.  There seemed to be a lot of songs about food including Chicken Pot Pie and Shephard’s Pie?  Hey Zach:  Don’t go onstage hungry man. The sun was out, fans were rallying, and it was just a great final set to the weekend, well done.

Our intrepid reporter Kara Kharmah did a ton of video interviews and caught a lot of live material from the bands all weekend.

An quick chat with Force of the Alchemystics and then live with Cornmeal:

An Interview with WAY UP SOUTH  Whipping  Post and more

An interview with Tor Krauter and a live performance by Rev Tor Band:

An interview with Phaze of DPR