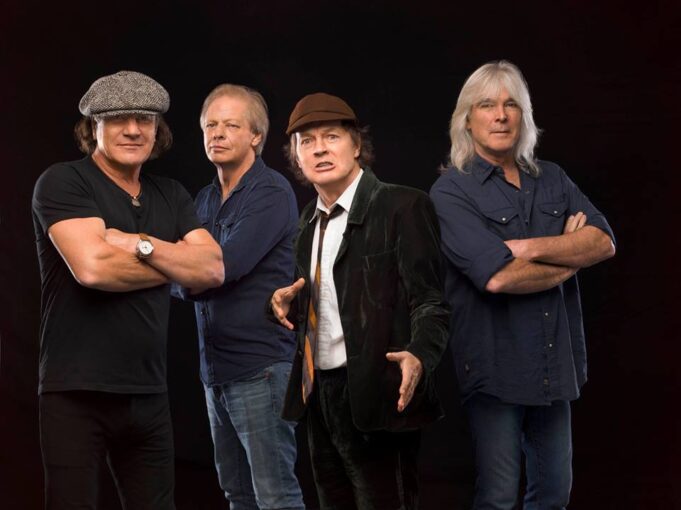 A week before today’s December 2nd release, AC/DC are gave fans an early chance to enjoy their latest album Rock or Bust, which is streaming now exclusively as an iTunes Radio “First Play,” http://www.iTunesRadio.com/ACDC.  This marks the first opportunity for fans to listen at will to all 11 tracks on Rock or Bust.  The songs “Play Ball” and “Rock or Bust” were made available early to fans who pre-order the album here: iTunesRadio.com/ACDC.

AC/DC released the official video for the title track “Rock or Bust.” Shot in London in early October, the video was directed by longtime collaborator David Mallet and features die hard fans from around the globe surrounding their heroes performing the song in an intimate club environment. USA Today recently chose “Rock or Bust” as their Song Of The Week and praised the track’s energy saying “AC/DC still has the ability, as Johnson sings, to ‘rock you to your knees.'”  While Rolling Stone proclaimed the song a “reverent tribute to rock & roll itself.”

Fans have been nearly unanimous in their praise of the new songs. Says Dharma Olivi Morgan from Georgia,”LOVE THE NEW ALBUM!!! It sounds amazing, a little classic mixed with the same brilliant rock. My favorite song so far is Rock and Roll Thunder.”  Andrew Knowlman goes further to say, “If you do nothing else in the rest of 2014, buy this.”

Anticipation and excitement among fans has been building ahead of the today’s release of Rock or Bust.  Listening events were held last week across the globe, which brought the excitement to a new high.  Fans at the New York City listening event at Webster Hall on November 18th were treated to a special surprise visit by lead singer Brian Johnson and guitarist Angus Young.

Rock or Bust was produced by Brendan O’Brien, with Mike Fraser mixing. The album’s cover art uses a developed 3-D lenticular technology, which gives the illusion of the band’s iconic logo exploding as the album is moved. Rock or Bust is the band’s first album of new material in six years, following their immensely successful Black Ice, which entered charts at #1 in 31 countries and has sold nearly 8 million copies worldwide.