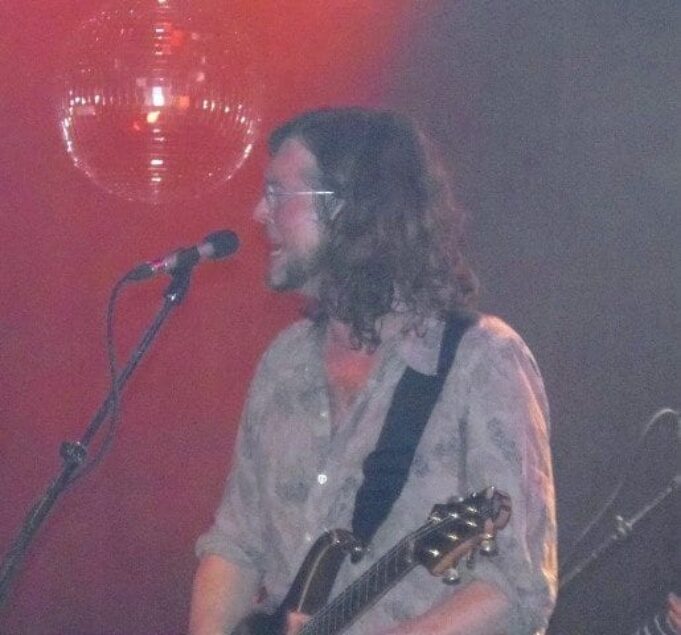 The John K. Band made their return to NYC for the first time in over two years.  It’s been so long since they’ve played the city that the venue that they were in last time, Sullivan Hall, has now been closed for months already.  This Friday night was a great day to celebrate with it being Good Friday, Passover, and 4/20 Eve Eve…

From the video channel of TimeZonerTV

The band contained all members, including a visibly glowing Lizzy Loves, who sadly had to miss the end of March shows but is nurturing her own musician within her.  It was good to see her back onstage where she was joined by Paul Grepps on keys, Nathan Graham on drums, Katy Gaughan on percussion, Larry Joseloff on bass, and of course John Kadlecik on guitar and vocals. The ensemble was joined by sax man Trevor Specht, who has been a frequent guest performer on saxophone, and can usually be seen in Washington DC with his primary band, Chopteeth. 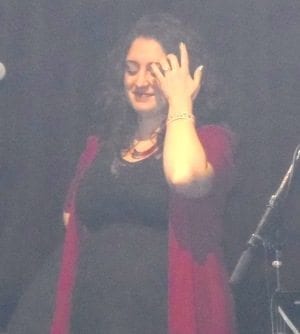 But first, there was a quick acoustic set with Boston’s favorite touring troubador Adam Ezra.  He came out and did a short set which ended with a spirited version of a song by “another songwriter from the New York area… ” and out came Bruce Springstein’s Thunder Road.

Then the John K. Band took the stage and came out strong with That’s What Love Will Make You Do.  It’s funny because I had a premonition before that song based perhaps on how they were warming up or tuning, and I was right as Givin’ Me the Business followed.  The set contained all sorts of great stuff including a fascinating version of Man Smart Woman Smarter.  I was there with keyboard man from the Jam Stampede, Waynard Scheller who remarked that it had a real New Orleans feel, and then during the solo looked up at me and said “What cartoon theme song is that?”

The set continued to gain momentum as the band whipped out two new originals Liquid Silver –> Riverrun.  Those songs had been premiered at the end of March and came back out joyfully with this show. 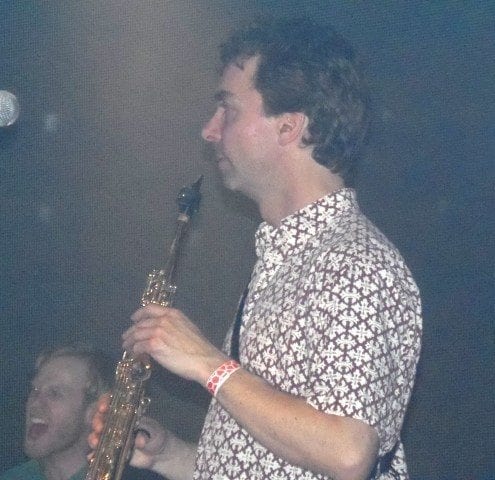 The set closed with an extremely joyful version of Feels Like Dynamite which I always enjoyed back when I used to see Merl Saunders and the Rainforest Band; you can just tell that John feels the same joy when he’s playing it that Saunders was able to exuded in all of his shows.

So I got the chance to wander up to the green room during the set and got to chat with John about that version of Man Smart Women Smarter.  A few of the musicians and I all had a conversation about the tune, and the rhythmic feel to it.  Kadlecik indicated that he was accessing two different versions of the tune that were outside of the Grateful Dead versions of the song to gain a bit more flavor into their version.  He specifically mentioned Robert Palmer’s version, and that he was integrating an alternate take on Bellafonte’s original version to create some new twists and turns.  He also indicated that the solo did in fact reference the Merry Melodies’ theme song “Merry Go-Round Brokedown” which was an adaptation of Charles Tobias’ Merrily We Roll Along.  So kudos Waynard, you were right on both counts.

Adam Ezra came back for a tweener set, and though I wasn’t in the main room for it, I could hear the strains of Steal Your Daughter and Burn Brightly  coming up through the floor.

The second set really picked up in terms of energy and excitement as the band again mixed unusual material from the expected songbooks with John K. Band originals.  The new original The Good Friday Experiment made its premier and went into the extremely spirited What’s Become of Mary which was an original the Kadlecik used to do with the band The Mix which included another stalwart keyboard player and member of the Garcia entourage, Melvin Seals.  What followed was probably the highlight of the night for me, which was Walking in your  Footsteps originally done by the Police.  The high energy of Mary quickly translated over to Footsteps  but reached a new and different level.  The band took the song and alchemized it, bringing out original qualities the listener may not have even felt, and bringing the song out to new heights.  Kadlecik and I had recently talked about “The Edge” and what it meant to him within the context of his recent shows with Phil Lesh and Friends.  I could sense him feeling out that Edge within this song, and pushing his band to new boundaries.

After an explanation of the origin or The Good Friday Experiment the band fired into a spirited Not Fade Away and then ended the set with the original The Great Vehicle.  Between the new pursuit of “the Edge” and the plethora of original music, you can really feel this band taking on a life of its own.  Taking on a musical personality that encompasses this new original music, as well as their own takes on familiar songs really is giving depth and breadth to the John K. Band.

After an extremely short break from the stage, the band came back for it’s encore, one of Garcia’s final originals with the Grateful Dead, So Many Roads.  While it started a bit slowly, it built up steam and energy and was the perfect end to the night.

Encore Video  So Many Roads: 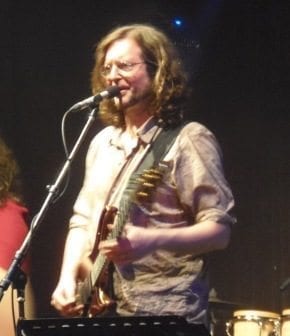 From the video channel of TimeZonerTV

Check out the review of the last of the Allman Brothers Beacon theater run.

Check out the review of the Boston show with Sting and Paul Simon in March.

Check out the review of the John K Band holiday shows in Washington DC.

Check out the review of the Furthur show in Boston summer 2013.

Check out the Phish NYE review by Dave Brunyak.