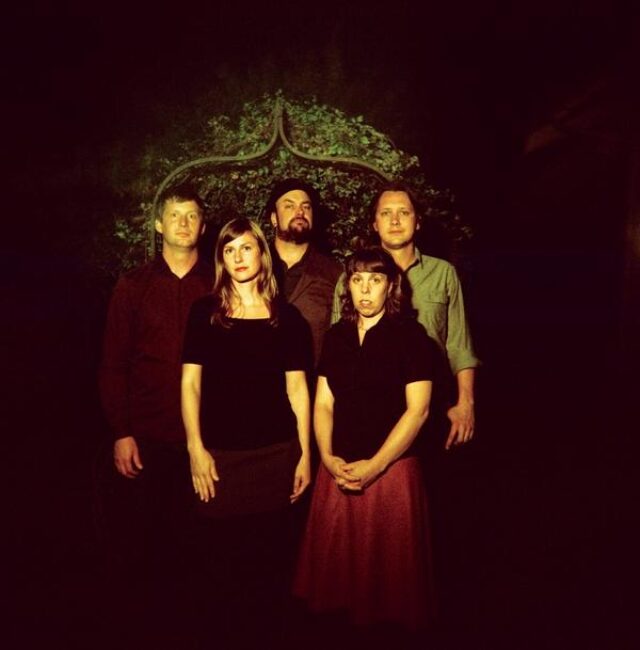 Black Prairie Gets Taxidermied in New Video “Let It Out” 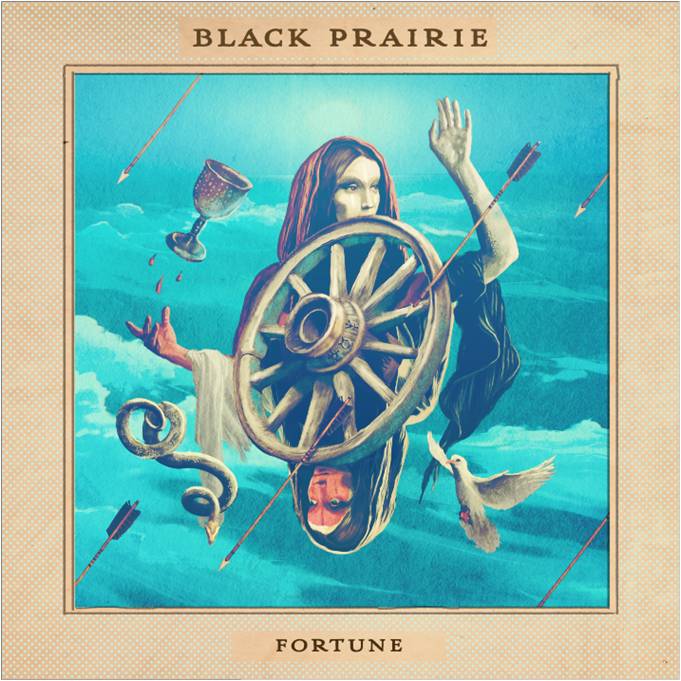 New Album Fortune Out Now, and US tour dates announced

new video for “Let It Out” was conceived by frontwoman Annalisa Tornfelt, who hunted squirrels as an Alaskan teenager.

“She then revealed they would make purses out of them and wear them to high school, even the bones in their hair to keep their buns up,” adds bandmember Chris Funk.   “And I thought smoking cloves while listening to The Smiths was edgy.”
Black Prairie features Chris Funk, Nate Query, Jenny Conlee and John Moen of the Decemberists with Annalisa and guitarist Jon Neufeld.  Produced by Vance Powell (The Dead Weather, Red Fang) Fortune proves the Black Prairie has outgrown its roots as a casual side-project, solidifying into a primary, creative focus for its members-a band with its own internal momentum, genuine character and style.  “Making this record was the most collaborative and magical thing,” says Chris Funk.
Black Prairie’s third full-length album Fortune was released April 22 on Sugar Hill Records.  Hear it in its entirety here at the Onion A.V. Club.

New Video “Let It Out”

By now, Black Prairie has clearly outgrown its roots as a casual side project, solidifying into a primary, creative focus for its members-a band with its own internal momentum, genuine character and style. Still, it’s only become harder to describe what that style is. “I gave up a long time ago,” guitarist Jon Neufeld says. When asked what kind of music Black Prairie plays, Neufeld usually just says “soft rock,” and walks away.

Black Prairie’s fourth full-length record Fortune is an unexpected departure-which is, strangely, exactly what everyone’s come to expect from the band. This group of seasoned musicians from Portland, Oregon-each steeped in traditional American acoustic music-has become hellbent on taking one imaginative leap after another. 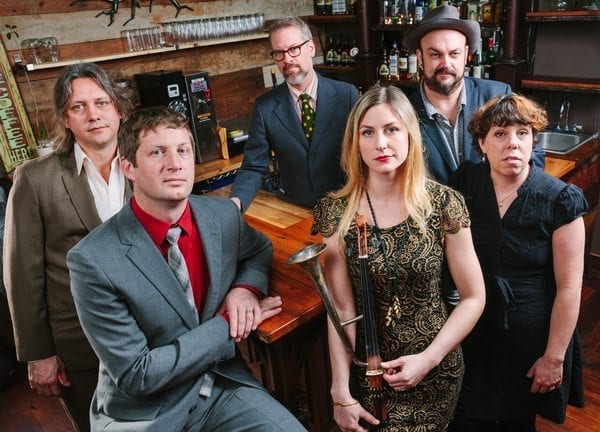 “We’re a much more fearless writing team now,” says bassist Nate Query. The band that started as an informal collective has now materialized into its own, fully living thing. Getting together to write Fortune last fall after a busy year of touring and tackling smaller, unconventional songwriting projects, the band felt like they had a well-bred, spirited animal hitched up and waiting for them-a horse flaring its nostrils, ready to run-and they wanted to keep driving it through as many different landscapes as they could.

“It was the most collaborative and magical thing,” Chris Funk says. Individual members brought in little strands of ideas, and the band collectively spooled them in like a loom and spun them into songs. Again and again, they found one person’s chorus and someone else’s verse slapping together like attractive magnets, or lines for a lyric flying out of all six mouths.

In a way, Fortune is also Black Prairie’s most conventional record-thirteen, polished vocal tunes with (mostly) conventional pop song structures. On the other hand, there’s a glaring eccentricity to Fortune that hits you right away: here is a band of accomplished acoustic musicians playing what are essentially rock songs, and sometimes with a pretty hard edge-it’s a record, band members say, that’s trying to channel not the spirit of Earl Scruggs or Jerry Douglas, but Led Zeppelin.

At the outset of making the album, Chris Funk set a new challenge for the group: write a record of all vocal songs. (Fiddle player Annalisa Tornfelt had reluctantly sung a handful of songs on Black Prairie’s earlier records; though Black Prairie always intended to be a strictly instrumental group, Tornfelt’s bandmates felt her voice was too rich and beguiling to keep quiet.) “I’ve worked with so many great songwriters over the years,” Funk says, “We all have. You sit behind them listening to all these great songs go by, and eventually you’re like, ‘Can I do that?'” The answer was yes. The band began hunkering down in their living rooms. After only two weeks, they looked up and realized they’d written their new record.

Inspiration and ideas had come ricocheting off everyone, pinball-like, and often at the oddest angles. Writing the lyric to Funk’s riff, “White Tundra,” for example, Tornfelt incorporated lines from a poem by Funk’s wife, Seann McKeel, and psychedelic stories about ethereal wolves from a book of Norse mythology that accordionist Jenny Conlee had read Tornfelt to sleep with in their hotel room on tour. Conlee’s song “Trask,” about a late 19th century Oregon fur trapper, came in as a straight ragtime number until Funk suggested reimagining it, amping it up into a grinding, punk romp, like something by the Pogues. Tornfelt took a melody by drummer John Moen and a half-jokey aside by Funk-he told the band he wanted to write a song about a couple kissing on the sidewalk, surrounded by rats-and came back with the pop-country gem “Kiss of Fate.”

“Normally in a band,” says guitarist Jon Neufeld, “you bring in solid, fully-formed ideas, because you think your song’s precious and you don’t want to leave a chance for anything to go wrong. But we were all leaving a lot of things up in the air. We were leaving space for inspiration, for things to go right.” There was no insecurity or ego, no sniping or bruised feelings; the writing was propelled forward by the band’s shared sense of adventure and the unshakable faith in each other they’ve forged. “I completely trust in everyone’s musicianship,” Tornfelt says, “and I know that an idea I bring in will be realized in its best light.” 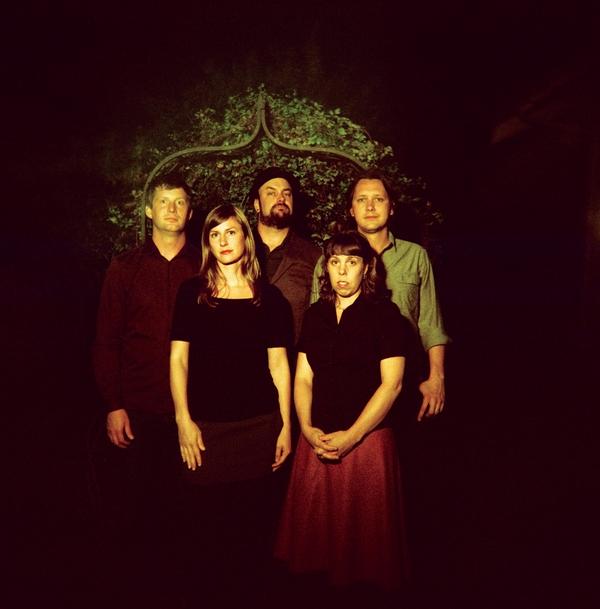 Band members trace the new, classic rock attitude that infuses Fortune back to New Year’s Eve 2012. That’s when Tornfelt sang Zeppelin’s “The Song Remains the Same” at a gig with Black Prairie members and Portland musician Laura Veirs. “Annalisa tore the roof off it,” Funk remembers, and having discovered a whole new, blaring dimension to their fiddle-player’s voice-and with a longstanding love of classic rock between them-Black Prairie got excited to edge a little in that direction. The band started covering the Zeppelin tune on the road, and other covers followed, including “Carry On My Wayward Son.” Inevitably that energy started inflecting the songs they were writing. Query says, “We’re trying to avoid the kitschy factor of a string band playing classic rock-we’re just trying to convey a joy of music and life.” It’s whimsical, maybe, but they’re committing to the whim with total artistic seriousness and passion.

To that end, they recruited Grammy-winning engineer Vance Powell-whose work with The Dead Weather and Red Fang the folks in Black Prairie especially loved-to produce Fortune. Powell’s battle cry in the studio became, “Let’s make it sound more broken!” He set up the band to play the tracks live, then he’d funnel them through an array of effects and layer that rougher sound behind their acoustic instruments. Pushing things in this direction seemed natural to Powell who, having seen Black Prairie live many times, knew that they may look like a bluegrass or folk band, but that their tastes and repertoire are much more expansive. There’s a fierce emphasis on musicianship, he says, but otherwise: “They’re genre-less. They’re not afraid of anything.”

The band’s story started in 2007, when Chris Funk gathered local musicians he admired for a chance to write music and play instruments he wasn’t utilizing in his role as guitarist in The Decemberists. He pulled in fellow Decemberists Nate Query and Jenny Conlee, on bass and accordion, Annalisa Tornfelt on fiddle and Jon Neufeld (Jackstraw, Doloreon) on guitar. In 2012, Decemberists drummer John Moen joined in, too. Their only ambition was to have fun, and their all-acoustic instrumentation meant they could hold practices in each other’s living rooms, sitting around a fire like a Stitch n’ Bitch or a book club.

But ideas started sparking immediately-they were pushing their own musicianship and the conventions of their instruments, and could hear a new brand of Americana music burbling up. Black Prairie’s first record, 2010’s Feast of the Hunter’s Moon, documented these first moves forward. And with 2012’s A Tear in the Eye is a Wound in the Heart-a record that seamlessly combined ghostly, progressive bluegrass, plaintive alt-country hooks and the occasional, wailing gypsy romp-the
band was off and running.

The attention and excitement A Tear in the Eye generated made 2013 a breakout year for the band, from gigs at big festivals like Bonaroo and Newport Folk to an appearance on The Tonight Show with Jay Leno. But none of it dampened the anything-goes, risk-taking attitude Black Prairie had adopted in the living room days. They jumped into all kinds of eccentric and creatively demanding projects. They did a stint writing songs and performing with cult-folk legend Michael Hurley. They supported a rotating, eclectic cast of musicians as the “house band” for Wesley Stace’s “Cabinet of Wonders” variety show in New York. They performed a set with the Oregon Symphony in Portland and composed a theatrical score for a production at the Oregon Children’s Theater, eventually released as the record “The Storm in the Barn.” And, last summer, they composed a “soundtrack” to New York Times Magazine writer Jon Mooallem’s book Wild Ones, then teamed up with Mooallem for a string of shows, orchestrating his storytelling live on stage.

“Last year was epic, in many ways,” says Funk. “I’m excited to play these songs live, but I’m also excited to keep going and just start writing the next record. It’s like a whole new muscle is getting exercised.”