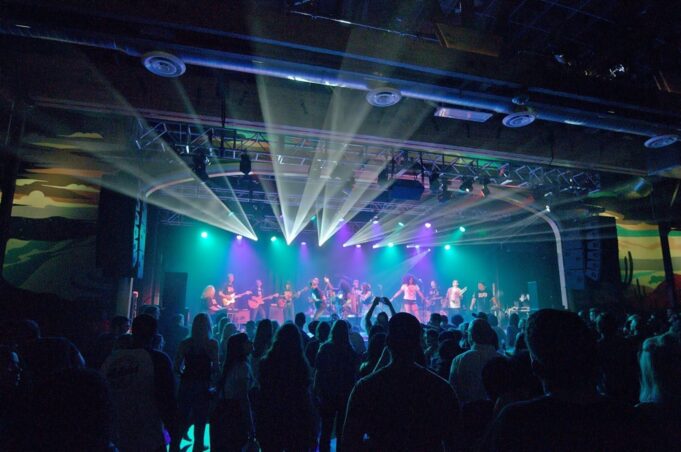 For the longest time Keene NH did not have a reliable small venue in which to see small bands.  Sure I had seen Blues Traveler at the Colonial theater downtown, but considering that Keene is a college town, it’s long overdue for a decent music bar.  So it was with great excitement that I heard that the old Railroad Tavern had been converted into a dual use club, Scores.  In the front room, anything that a sports fan could want with TV screens everywhere playing live sports.  In the back, a great room for live music.

I was greeted by music presenter and bar man Paul Haley in the front, and then I wandered back with my companions into the music room.  The size is perfect, big enough for a crowd of a couple of hundred people at least, but small enough so that a crowd of 30 people is enough to have a good show start.  I saw sound man Chris in the back, who used to be the proprietor in neighboring Brattleboro’s Barnaby’s, and is now head sound tech at Scores.  They have put in a great system, with full sound, intelligent lighting, projections, and anything you would expect in a venue triple the size of Scores.

The five guys who are the Van Burens took the stage.  The band hails from Boston and have been cruising the New England circuit the last five years or more, and have done some national touring all the way to the West Coast.  But clearly New England is their home and a small but devoted crowd came out to see them on a bitterly cold night.

The Van Burens offer a unique mix of elements:  finely crafted progressive music, bold instrumental passages, quirky humor injected throughout, and songs about presidents.  You’d be hard pressed to figure out which of the two guitar players is the lead, as they pass the rhythm and solo responsibilities between them.  Emmett Knox is really a special bass player, able to stretch out the boundaries of the rhythms of the songs, without letting flash and technical ability over run his responsibilities on the bottom end.

The Van Burens are in their own world, complex, filled with inside jokes that they share with everyone.  The songs are well constructed and expertly executed.  The band is quite certainly a technical band with extremely progressive leanings.  It’s easy to pick out elements of their influence from moment to moment, Yes to Phish, Frank Zappa to Deep Purple.  But none of these influences override their sound or vision, and the result is something that is strictly their own.  I was most easily reminded of the band Guest out of Columbus OH who shared the Van Burnes penchant for progressive music and exploratory journeys, but clearly there is very little probability that the Van Burens were directly influenced by them.

Back to the presidents.  There clearly is a theme, as there were songs ranging from a tribute to John F Kennedy, and humorous lead in and exploration of William Harrison, and a song for the bands namesake, Martin Van Buren.  It’s easy to believe that given enough time the band will write and perform a song about every President.  These songs about our past leaders are no more accessible than their other progressive material, and contain the same sort of happy sarcasm that the rest of the material features.

I’m already looking forward to my next visit to Scores, as the room is a perfect mix for me personally-  I can catch a Sox or Celtics game, chow down on some onion rings, sample the finest micros or liquor available in the area, and experience great live music in an inviting atmosphere.  I’ve already marked my calendar for April 25 when Roots of Creation will be there.  But I’ll be certain to check in with them more frequently to see if in fact there are other fine bands that will be hitting the college town of Keene NH.  See you there.