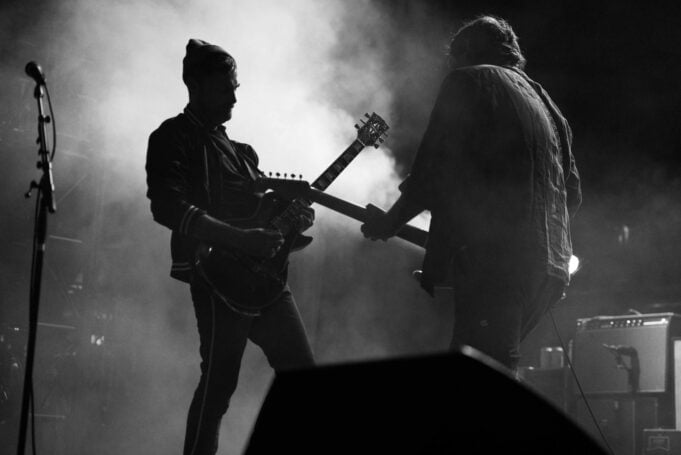 Photos by Mark Ashe Photography and Words by Carly Kerr

Gaslight Anthem’s September 28th show at Pier 17 marked the band’s long-awaited return to New York. Fresh off a run of reunion shows in the U.K. with Chris Farren, it only seems fitting that they would invite Jeff Rosenstock along for a leg of their U.S. tour. Rosenstock is a fellow tri-state local and bandmate of both Farren and Gaslight Anthem’s Benny Horowitz (in Antarctigo Vespucci).

The rooftop filled to capacity during the intermission, suspense building all the while.

Gaslight Anthem walked onstage to Fergie’s “London Bridge” and transitioned seamlessly into “Have Mercy”, a cut track off of 2014’s Get Hurt. Always charismatic, Brian Fallon has a way of reigning an audience in, keeping them hanging on every raspy lyric.

The band followed with the danceable Springsteen-esque “Old White Lincoln” and “The Spirit of Jazz”. Fallon then jokingly introduced slow-burner “Mae” as a cover of Slayer’s “Raining Blood”. And the jokes didn’t stop coming. The show devolved into a lengthy Brian Fallon stand-up set mid-way through. His dark tangents about everything from cannibalism to despising weddings were entertaining and delightfully unhinged. Although, a tight five would have sufficed for the comedy routine. The crowd was understandably impatient to hear the songs that they’d been waiting years to hear again.

Once the longest bout of banter concluded, the band came back in with “Halloween”. There was a collective sigh of relief. The rest of the performance was tight and magnetic, including an electrifying cover of Pearl Jam’s “State of Love and Trust”. The setlist was varied and well-crafted, ebbing and flowing. The night concluded (unsurprisingly) with “”45”” and “The ’59 Sound”. The fan-favorites were rapturously satisfying to hear. Here’s to hoping that Gaslight Anthem’s forthcoming album cycle is as triumphant as their comeback.

Full gallery of Gaslight Anthem photos from this night here.

THE SPIRIT OF JAZZ

MILES DAVIS AND THE COOL

Jeff Rosenstock and his band made their entrance to the Pokémon Theme (Gotta catch ‘em all!). The crowd’s attention was captured immediately, whether they were there to see Rosenstock or had no clue who he was.

The show began with “USA”- a dynamic and climactic and opener. The energy only escalated from that point on. The set was non-stop- even when Rosenstock’s synthesizer came unplugged or when he urged the audience to maintain the venue as a safe space. He was perspiring as though he were running a marathon- which he nearly was- bolting back and forth across the stage, channeling the infectious punk energy that he’s maintained from his roots in the Long Island DIY scene. The energy remained elevated even when the music slowed down, during performances of “9/10” and “All This Useless Energy”.

The opening set closed with “You, In Weird Cities”, an anthem about nostalgia and old friends; both relevant topics leading into the reunion show to come. Rosenstock implored the audience to sing along as he played the final melody on the saxophone.

Check out the huge gallery of Jeff Rosenstock photos from this night here.

WAVE GOODNIGHT TO ME

ALL THIS USELESS ENERGY

MONDAY AT THE BEACH

YOU, IN WEIRD CITIES

Full gallery of Gaslight Anthem photos from this night here.