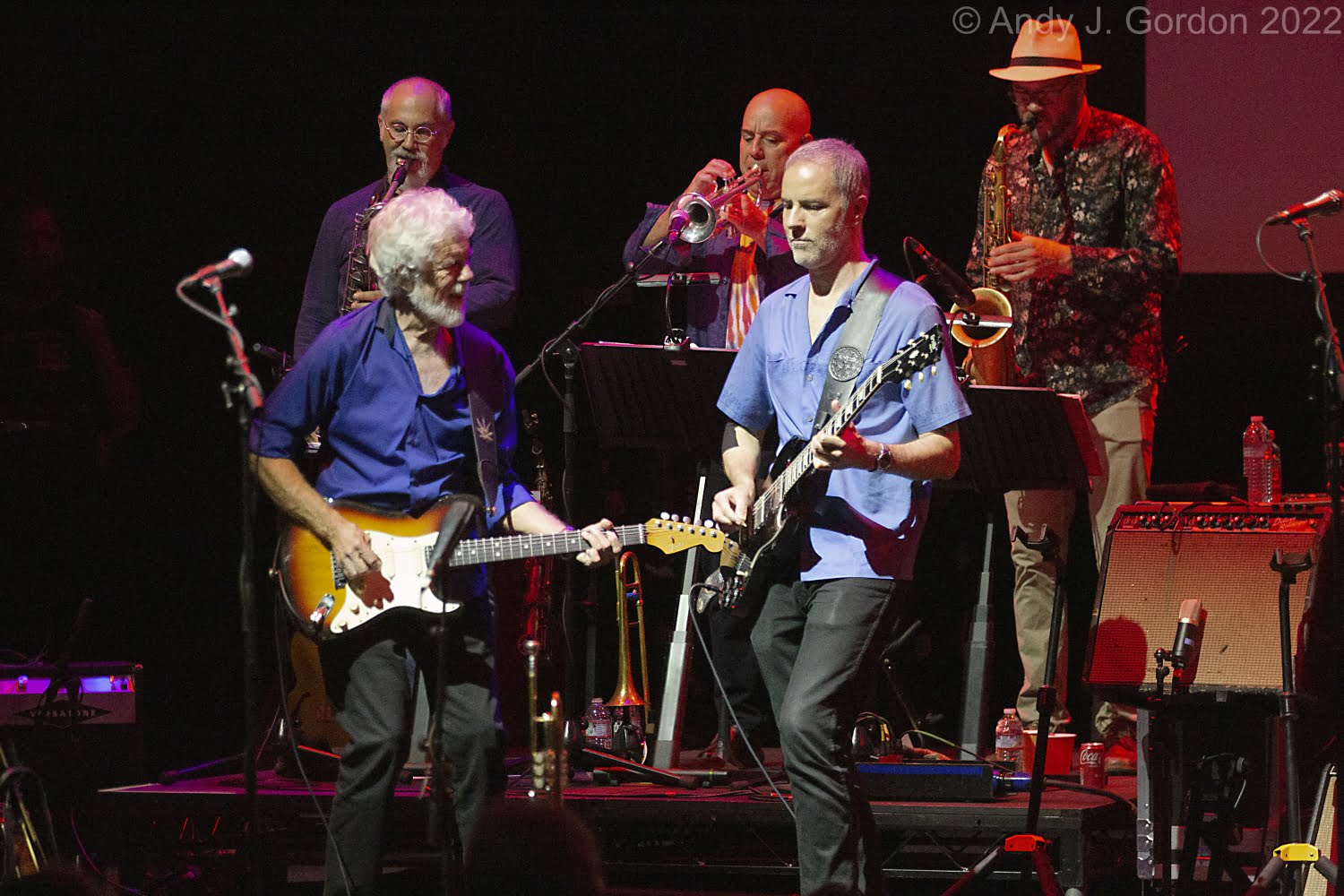 On August 12, 2022 Little Feat brought their Waiting for Columbus: 45th Anniversary tour to the beautiful Theatre at Ace Hotel in downtown Los Angeles. The two hour single-set reproduced the tracks off their 1977 album, “Waiting for Columbus” and also included a few clever surprises. Sit ins by Jack Casady and Jorma Kaukonen, who opened the show with an acoustic Hot Tuna set, made the night particularly special for the dedicated fans who were able to relive a cherished album from their youth.

The band sounded fantastic at the Ace Hotel. Bill Payne and Scott Sharrard handled the bulk of the lead vocals, but Fred Tackett, Sam Clayton and Tony Leone all harmonized wonderfully and occasionally took on the lead role. It did not take long for the crowd to get involved – they were standing up and shouting out the lyrics to “Oh Atlanta” and joined in on many of the memorable hits from the album.

After Payne introduced the band members, he paid tribute to original and longtime members that have passed away. It was particularly heartfelt when he talked about multi-instrumentalist Lowell George, guitarist Paul Barrere and drummer Richie Hayward. The group launched into “Time Loves a Hero” as a homage to them and a comprehensive video montage of album covers, old photos and concert footage played on a big screen behind the band.

Check out the full gallery of photos by Andy J Gordon here.

Sharrard, who previously was in Gregg Allman’s band and with The Doobie Brothers, shredded on guitar all night and contributed enthusiastic vocals. His slide solos and intricate finger picking were especially poignant during “Day or Night.” Tackett also blasted out a complex solo during that song and added a fine trumpet solo on “Mercenary Territory.” Tackett’s son Miles joined the band on guitar for “Spanish Moon” that was sung beautifully by Sam Clayton. Miles Tackett blasted a fine solo before hugging his Dad and exiting the stage.

Hot Tuna’s Jack Cassidy came out to join the band for “Dixie Chicken.” As the crowd sang along to the chorus, Cassidy traded licks and knowing glances with Payne before wrapping it up and exiting stage right. The band dialed it down a notch for a mellow and passionate take on “Willin’.” Sharrard sang lead and played an acoustic guitar. Tackett played mandolin and nailed a twangy solo while Payne played a sweet piano solo.

The guitar talent on stage expanded as Payne introduced Hot Tuna’s Jorma Kaukonen, who came out with a Gibson Les Paul to join the band for an energized “A Apolitical Blues.” Sharrard, Tackett and Kaukonen all took turns crushing blues infused solos. After Kaukonen left to thunderous applause, Payne sang and played piano for a slow tempo version of “Sailing Shoes.” He then led the band through Lowell George’s funky and bluesy “Honest Man.” The show wrapped up with a fast paced, rollicking version of “Let it Roll” with Sharrard singing lead.

Hot Tuna’s Jorma Kaukonen and Jack Casady are two legendary members of the Rock & Roll Hall of Fame and Grammy Lifetime Achievement Award recipients, who continue to amaze and delight audiences. As founding members of Jefferson Airplane, they deserve their place among the list of rock’s greatest performers and pioneers of the psychedelic sound. For their opening set at The Ace Hotel, the duo was joined by Justin Guip, their drummer since 2014.

Kaukonen played acoustic guitar for the entire set and his tone was phenomenal. The interplay between him and Casady could only be honed from 50 years of playing together. About halfway through the set, Kaukonen introduced Little Feat trumpeter Steve Bernstein, who came out for Blind Gary Davis’ “Death Don’t Have No Mercy” a song frequently covered by Bob Dylan, the Grateful Dead, and Hot Tuna in the 1960s. His horn added depth to the mix as he and Kaukonen traded elaborate solos. Bernstein stayed for “Barbeque King,” a deep track from Kaukonen’s 1980 solo album by the same name. They finished off their performance with excellent versions of blues standards “How Long Blues” and “San Francisco Bay Blues.” Kaukonen and Casady bumped fists before leaving the stage to enthusiastic applause.

Check out the full gallery of photos by Andy J Gordon here.