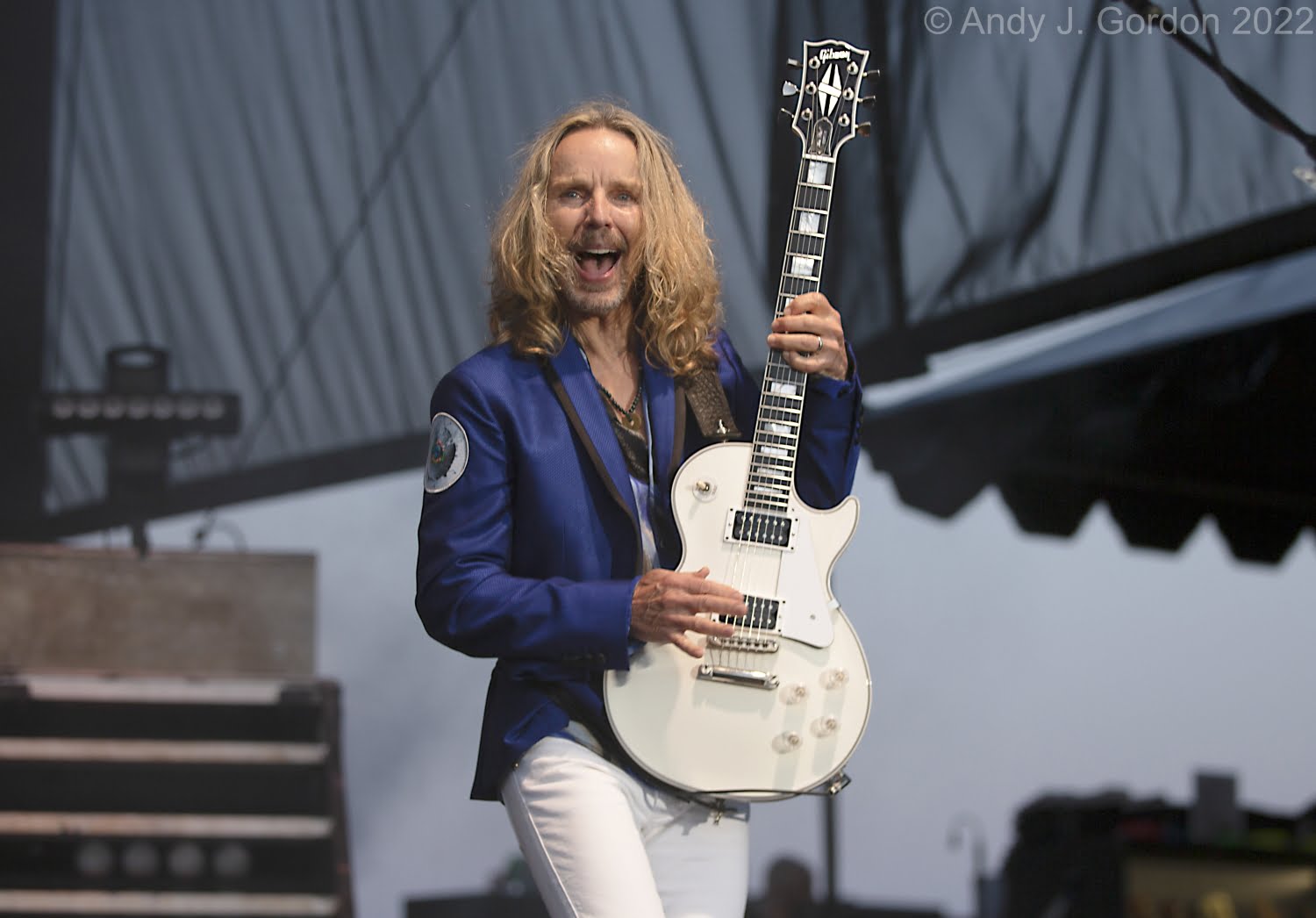 Southern California Baby Boomers got a nostalgic treat as rockers from MTV’s heyday STYX and REO Speedwagon, with support from Loverboy, brought their “Live & Unzoomed” Summer 2022 tour to the FivePoint Amphitheatre in Irvine, California. Nearly 12,000 adoring fans enjoyed a beautiful summer evening at the outdoor venue as the three bands thrilled the audience with spot-on versions of their memorable hits.

Loverboy opened the show as the Southern California evening sun blazed down on the large stage. Lead vocalist Mike Reno said, “It’s great to be in front of a crowd again” as he led original members Paul Dean on guitar, Doug Johnson on keyboards and Matt Frenette on drums. Ken “Spider” Sinnaeve replaced the late Scott Smith on bass. The band played fine, tight versions of their songs and got enthusiastic support from the crowd.

Reno led the audience through a call and response during “Loving Every Minute of It.” Many fans could be seen dancing at their seats and in the aisles while the band played “Hot Girls in Love.” Matt Frenette played a short drum solo before the other band members joined in and got everyone on their feet for “Turn Me Loose.” Many in the audience sang along and Paul Dean ended it with a stunning guitar solo. They finished the set with “Working For The Weekend” as the crowd nearly drowned out Reno’s vocals.

STYX followed with a superb performance. The multi-Platinum rockers and longtime members – James “JY” Young and Tommy Shaw on lead vocals and guitars, Chuck Panozzo and Ricky Phillips on bass and vocals, Todd Sucherman on drums and Lawrence Gowan on lead vocals and keyboards were joined onstage by newest member, guitarist Will Evankovich. Gowan and Shaw both sounded amazing and the band’s harmonies were outstanding throughout the set.

The show included extravagant visual effects and all of the band’s hits. Gowan exceled early in the set on “The Grand Illusion” and “Lady.” He got quite a bit of dramatic use from his 360 degree, rotating keyboard setup – sometimes playing backwards, other times spinning it like a top. Gowan’s vocals and the other members harmonies were excellent on “Rocking The Paradise.” Shaw played an impressive guitar solo to end the song. Shaw then told the back story about the Panozzo brothers forming the band (drummer John died in 1996) and brought out Chuck Panozzo who had been in the wings up to that point.

Panozzo stayed for the rest of the set. Shaw played acoustic guitar and sang lead vocals for sweet sounding “Fooling Yourself (The Angry Young Man).” He introduced “Too Much Time on My Hands” by saying “this song debuted in the first hour of MTV.” The crowd probably did not remember that historical moment, but definitely enjoyed the band’s performance of the song.

The set ended with a dramatic version of “Come Sail Away” led by Gowan. The crowd sang along as the stage was filled with smoke, trippy lights and visual effects. Each of the musicians played beautifully during the instrumental portion of the song and Shaw capped it off with a scintillating solo. They did a two song encore that included the Gowan led “Mr. Robato” with Japanese themed visual effects and “Renegade” led by Shaw. The band showed off their great harmonies again with the slow opening as the song transitioned into a rousing climax. James Young provided an excellent solo before the band finished the song and their set.

Read the review of Styx in Boston from NOV 2019 here.

REO Speedwagon received the headliner slot at FivePoint (they alternate with STYX at each of the Summer 2022 tour stops) and thrilled the audience with their performance. The band has been fronted by vocalist Kevin Cronin since 1972. The other longtime band members at the show were Bruce Hall on bass, Neal Doughty on keyboards, Dave Amato on guitar and Bryan Hitt on drums.

It did not take long for the band to get the audience singing along. Cronin was nearly drowned out when he began “Take It On The Run.” A bit later, he quipped, “I’m 70 years old and at this point in my life I thought I would know what’s going on in the world, but I don’t know shit!” He then played acoustic guitar and led the band through a still relevant version of “Live Every Moment.”

Cronin introduced Neal Doughty as the only band member to play on every album and at every show throughout the band’s history. Doughty sat at a grand piano and played superbly as the band started “Can’t Fight This Feeling.” The late section of the show included more big hits. Doughty played a trippy organ intro for “Time For Me To Fly” as Cronin sang and played a twelve string guitar. The crowd was swaying and waving their arms as Amato played a blistering solo with his double necked Fender strat.

The set ended with a spectacular version of “Riding The Storm Out.” Amato played another inspired solo and instead of leaving the stage before the encore, all of the band members stayed. Cronin moved to the piano and led them through a wonderful version of “Keep On Loving You” that segued fluidly into the show ending “Roll With The Changes.” Cronin was still playing piano and he traded sophisticated solos with Doughty on organ and Amato on his guitar as they finished the performance.

Three bands who produced many hits over the years formed a pleasing lineup at FivePoint Amphitheatre. The crowd enjoyed a long night of terrific music performed by talented artists who still love to play for the audience. That love went both ways. As long as STYX, REO Speedwagon and Loverboy continue to pump out quality live versions of their hits, crowds will keep coming to relive many fond memories.

Read the review of Styx in Boston from NOV 2019 here.