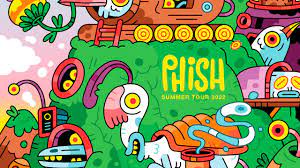 Phish returns to Wantagh NY for a second night.

Waking up after night one of Phish at Jones Beach, and we had one question to answer- how to make today as awesome as yesterday. It turns out, pretty easily! Grab some java, and head to Jones Beach nice and early to catch some surf. The weather was sunnier and hotter than the day before, we paid our ten dollars (very reasonable for concert / beach parking prices) and made our way to the exact place we had parked the day prior. Another plus- there was no parking directors, meaning Phish fans could easily park themselves, find each other, and make great parked car caravans. Given how militant things were at Jones Beach decades ago I was continually surprised at the relatively chill vibe of the authorities in Wantagh NY this week.

We hit the beach and the waves and had a great time. We got walloped by a few, my brother lost his hat, we got kinda sunburned, and had a great afternoon. We wandered back to the parking lot where our friends were gathering for tailgating and I had a great time catching up with old friends from around the country who can always count on Phish tour as a place we are all stoked to gather.

Shortly after 8 PM the band took to the stage and kicked off the show. Would my 1.0 dream shows continue? Would we get a lot of newer material? Is this the odd night where a big Gamehenge might pop? The show opened and my first goal was reached, as a relatively concise “Mike’s Song” started the show. Noting the absence of the Weekapaug on this occasion, my brother and I high-fived for the first transition into “Wolfman’s Brother.” We’ve had a long debate as to who of us is the Wolfman and who is the brother, and since I shaved just before this tour (a few times a year whether I need it or not usually), I decided tonight he was the Wolfman and I was the brother.

Old material was still on the menu as the band busted out with “Ya Mar.” My mind was transported back to the summer 95 tour which was probably my last Ya Mar, and memories with my friends from earlier this afternoon. Mike was in fine voice and the whole vibe of the front half of the show made me wonder if we were in for a whole Mike night.

Like the day before, a new song “46 Days” was fine with me because I had seen it perhaps with TAB (?) and was familiar with the tune. But nobody could have expected the segue into Page McConnell’s “It’s Ice” which was tasty both in its rarity and its execution. A pair of newer songs (“All These Dreams’ and “Something Living Here”) had my mind wandering a bit, but my attention was grabbed again by “Axilla, Part II” which was raucous and rocking. The segue included a major tempo shift to “When the Circus Comes” by Los Lobos which was a down tempo ballad and enjoyable.

Don’t rest too much though as “Run Like an Antelope” closed the set full of energy and the essence of Phishy goodness.

I knew what to do for set break from the night before and ran to get water through the free filtering machine in the vending area. I can’t say enough how important and wonderful a feature this is. Another feature of this show that I noticed during set break was that even though there were screens set up on either side of the stage, and advertisements flipped through when the show wasn’t happening, that the band chose not to use them for live footage. I can’t help but be distracted by screens whenever I am at a show, and since modern American life is so dominated by screens I just don’t need or like the vibe at live shows. Every seat in Jones Beach seems pretty good for sight, and we know what the boys look like, and the light show is so dang on point- we don’t need screens.

The front half of set two was a mix of newer material like the opener “No Men in No Man’s Land” and older material like the song that followed “Down with Disease.” As I have grown accustomed, songs in the second set tend to be jammier and the band explores more and the Disease while not historically long had plenty of opportunityh for exploration for the band.

New song “Don’t Doubt Me” came out and was weird and aggressive in a way that the band hadn’t really expressed so far at Jones Beach. Fishman used his electronic drum samples and Trey and Fish’s assertive vocals kept us on edge. “How dare you tell me? Don’t you dare tell me” This song has a Carini vibe but has its own thing, too. The “Golden Age” that followed surely pleased my friend who had purchased a pin in that theme in the lot that day featuring The Golden Girls.

I understand that “Lifeboy” is a very infrequent song, and the ballad was tasty and contemplative. This was another song that threw me back to my 95 tour memories, not that I haven’t seen plenty of shows since then. Having done almost that whole summer tour, I get nostalgic for it and tend to flash back in the “glory days” sort of thinking that we get over time.

The set’s climax began with a great “Fluffhead” which is always a gem and enough to throw the crowd into a frenzy. It felt both like the finale of the set, and not quite there, also. And here it comes, the Weekapaug Groove to close out set two. It was jaunty and fun. And it also raises the question for me- with a Mike’s Song opener and a Weekapaug closer, is the whole show not just a giant Mike’s Song?

After a quick break and a glance at my watch I figured we’d have a shorter encore. So I was a bit surprised when “Slave to the Traffic Light” unfurled. The ultimate 1.0 song!!! Sure, Trey stumble a tiny bit on some of the few lyrics that the song has, but it didn’t matter. After two days next to the page the summer romance was in full force, and the band could do no wrong.

We hustled out to the parking lot, past the dude who sets up a drum set, and out to our parked car caravan. Our tour friend had a table out with snacks, we all gathered, sated and smiling. Tired though we were, we all basked in the glow of the two shows, our mutual friendship, and the love of summer tour. May it never end.

Hey, thanks to Nevalass for shooting some great videos I picked up to add to these two reviews. It feels like we were sitting very near to each other so these videos really reflect the view I had both nights.

Set 2:
No Men in No Man’s Land
Down With Disease
Don’t Doubt Me
Golden Age (TV on the Radio cover)
Lifeboy
Fluffhead
Weekapaug Groove

Encore:
Slave to the Traffic Light