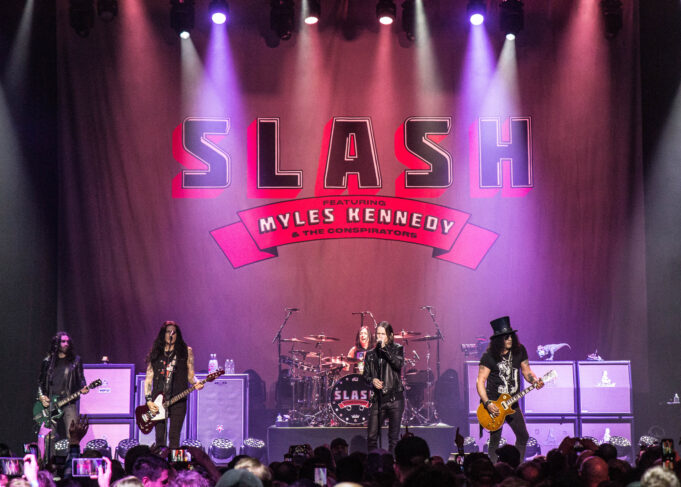 When the lights went down all you could see were hundreds of illuminated cell phones lifted into the air. It was a sold-out crowd on Monday for Slash and Myles Kennedy at the House of Blues, midway through the band’s 2022 28 date US tour.

There are few iconic rock stars as recognizable, cherished and universally acclaimed as Slash and for good reason. Regardless of whatever personal demons and rock star bad habits, Slash has remained the consummate professional, more often than not, letting his music do the talking. Unlike some of his former band mates, Slash has kept most of his complaints to himself. He is also a rock and roll survivor who famously indulged in all the excesses of the rock star lifestyle but came out the other side with all his skills and talent intact. Although fans of the guitar virtuoso span a very wide age range, many in the crowd on Monday grew up with Guns and Roses music as the soundtrack to their youth. No doubt many came to hear those hit songs and may have been disappointed that the 21-song set list did not include a single Guns and Roses song.

The concert kicked off with “Driving Rain,” from the fourth solo album by guitarist Slash and the third to feature Myles Kennedy and the Conspirators. Like many big rock acts, the set lists have been similar from show to show with few exceptions. On this tour the band has been playing a good mix of songs from each of the Slash’s solo recordings, new material and the Slash/Lenny Kravitz collaboration hit song “Always on the Run” and a surprising and wonderful cover of Elton John’s Rocket Man. Another highlight from the set list is “Dr. Alibi,” sung well and delivered with full rock roll attitude by bassist Todd Kerns.

Myles Kennedy is one of the most consistent and professional lead vocalists. He has tremendous range and knows how to deliver a song with the right punch rock spirit, but he does not stray far from the formula that has made him so successful. Kennedy looked like he was genuinely having a good time but barely broke a sweat the whole evening. The bands sound is big, and every song is flawlessly delivered, and almost too polished and by the numbers. Slash’s guitar playing, tone and technique is also flawless but really does not kick into high gear until mid-way through the set, when he takes extended solos.

Things really take off on the melodic “One You Loved Is Gone.” Playing a 1966 Gibson double neck, the song is just a vehicle for Slash’s expert soloing. What starts out standard 80’s rock ballad guitar solo turns into something jaw dropping and awe inspiring, a prime example of what makes Slash so admired by fellow musicians and fans alike.

Check out the huge gallery of photos from this night here.

A few songs later during the final “World on Fire” Slash would take another blistering extended guitar solo that would have fit in nicely with Fog Hat’s Slow Ride or any number of classic rock hits. The show closed with the encode “Anastasia” from the second solo project Apocalyptic Love and first billed to Slash feat. Myles Kennedy & The Conspirators.

The all-female band Plush opened the show at House of Blues and no doubt made some new fans with their high energy rocking set. Although the band members are all just barely or under 21 years old, they have talent and poise way beyond their years. The Heart cover Barracuda was a crowd pleaser and a highlight.

Whatever Gets You By

Always On the Run

Standing In the Sun

One You Loved Is Gone

Call Off the Dogs

From the video channel of sawayaka33

WED, MAR 9
THE RIVER IS RISING TOUR AT THE FILLMORE
SILVER SPRING, MD

MON, MAR 21
THE RIVER IS RISING TOUR AT THE FILLMORE
CHARLOTTE, NC

Check out the huge gallery of photos from this night here.