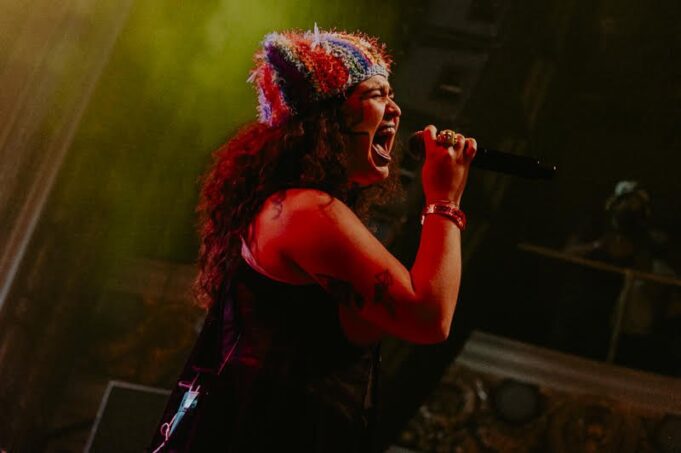 Remi Wolf kicked off her sold-out North American tour at The Regency Ballroom on January 24th. Aside from being the tour’s first show, it was also special because it was a hometown show for Remi, who is from nearby Palo Alto.

To start the night, Remi performed “Liquor Store,” the first song off her debut album Juno which was released in October of 2021. In addition to performing songs off her new album Remi also performed music from her first EP, I’m Allergic To Dogs!, which was remarkable for all of her die-hard fans.

Remi put on a fun show which matched her chosen outfit. She was wearing jean shorts, Uggs, and a rainbow beanie. You could tell how much Remi enjoys being on stage by her constant movement, interactions with her band, and her ability to feed off the energy the crowd provided.

Remi performed “Photo ID” from her EP to end the night. But of course, she wasn’t entirely done and came back out for an encore and sang “Street You Live On’ From Juno and “Disco Man” from her EP.

Remi’s quick tour will wrap soon, but from the success of this tour, I think it is safe to say another one will be coming real soon.

Based in Los Angeles, Remi Wolf is a singer/songwriter who traffics in a colorful brand of pop that incorporates funk, disco, left-field, and lo-fi bedroom pop. She began releasing singles in 2019, earning praise for songs like “Guy” from her colorful debut EP, You’re a Dog. Wolf made her major-label debut with 2020’s I’m Allergic to Dogs!, followed a year later by We Love Dogs!.

A California native, Wolf‘s musical passions began at a young age, though her unusual story arc also includes ten years of downhill ski competition and Olympic training as well as a 2014 run as an American Idol contestant. Although she could have adapted her powerful, soulful voice to the masses, Wolf‘s vibe was a bit too quirky for the mainstream and she eschewed the typical post-Idol path and spent several years crafting a unique D.I.Y. sound. She finally made her solo debut with 2019’s “Guy,” a winsome slice of tropical funk-pop that lit up blogs and playlists. She later folded it into her debut EP, You’re a Dog, which further showed off her range. A 2020 feature on Cautious Clay‘s sunny track “Cheesin'” brought her further attention ahead of her second EP, I’m Allergic to Dogs!, her major-label debut for Island Records. Wolf returned the following year with a third EP, We Love Dogs!

Taken at the Portland Oregon show on this same tour: