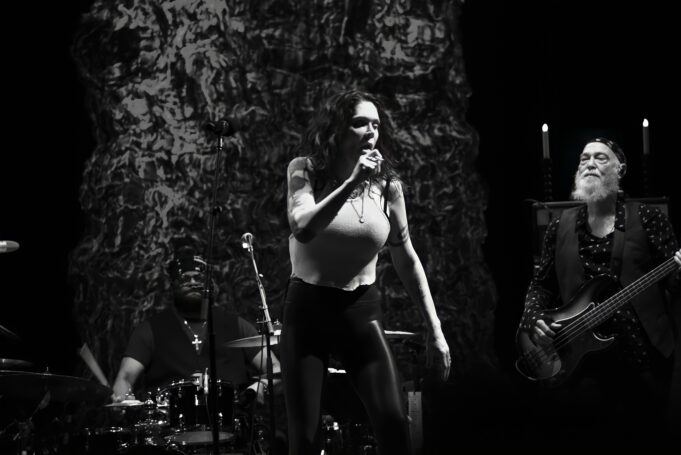 Quinn Sullivan opened for the night warming up the crowd who came to see Beth Hart. Sullivan is a young upcoming singer/songwriter and guitarist. The 22-year-old performer is already making a name for himself having traveled the world and appearing at MSG, Hollywood Bowl, CBS Saturday and Late Night With Jimmy Fallon. Quinn has released a new album, “Wide Awake”, spotlighting his guitar prowess and chops being favorably compared to John Mayer. The music has a pop bluesy feel to it, and often during his set, the material came across as more soft, commercial, and mainstream rather freewheeling, raw and dirty. Though, Quinn has a friendly and likable presence onstage. Yet, it is clear he is still tentative and green regard in how to connect with the audience. However, that will come with time and experience as to understand how to build on that dynamic and rapport. The strongest aspect and what made a lasting impression of his brief set came with an exciting guitar solo with his mandolin player Chris Bloniarz jamming for a few solid minutes taking musical flight in a way that was exhilarating and captured the audience’s attention.

The six-song set included All Around the World, Real Thing, How Many Tears, George Harrison cover of While My Guitar Gently Weeps,” You’re the One – Wanna Dance (mash-up) and In a World Without You. All the songs were done well enough. The audience seemed to like Sullivan’s set and encouraged with him with warm applause after each number and a few cheers here and there.

Singer/songwriter and GRAMMY-nominated vocalist Beth Hart really wears her heart on her sleeve. Performing live at the Saban Theater, on February 5th, Hart showed she is truly a soaring, visceral, gritty powerhouse artist with a contralto vocal range. The dark-haired vocalist gives her complete all while onstage singing. One can tell it’s really a cathartic and liberating experience for her telling stories about her personal life. Those stories include her struggles with mental health (being bipolar), love, addiction, dad and sister that have informed her gritty, explosive and introspective songwriting and wide-ranging life journey and path to date.

Hart also spoke and joked about the lengths she gone to up smoking. She often got close up to her legion of fans literally sitting often on the stage’s edge. It was balls to the wall, tour de force performance. She taps into wellspring of emotion and feeling and there is a lot of artistry, substance and depth to her multi-faceted gifts as an artist. Also, Hart is such a dynamic and talented presence besides singing she is also a gifted piano player, guitarist, cellist, bassist and percussionist. She also was adeptly backed by Jon Nichols on guitar, Tom Lilly on bass and Bill Ransom on drums. The whopping 23 song setlist included material from her long-standing career that begin in 1993. There were many highlights in the show including: “Levee,” “Gangster,” “Back as Night,” “Bad Woman Blues,” “If I Tell You,” “Bad Woman Blues,” “Hero,” “No Quarter,” “Babe,” “Black Dog,” and “Rather Go Blind.”

Hart is also on a national and European tour going on through into 2023 promoting a new album, ‘A Tribute To Led Zeppelin.’ Her albums have gone double platinum and topped the Billboard Blues charts six times. She is richly deserving as being recognized as one of her generation’s most talented voices. Hart has toured the world with Jeff Beck and Buddy Guy gracing the stage with those legends. Also she had a string of Top 10 albums across Europe.

Plus, she been called “the new Janis Joplin” by guitar legend Joe Bonamassa, with whom she had performed and recorded.