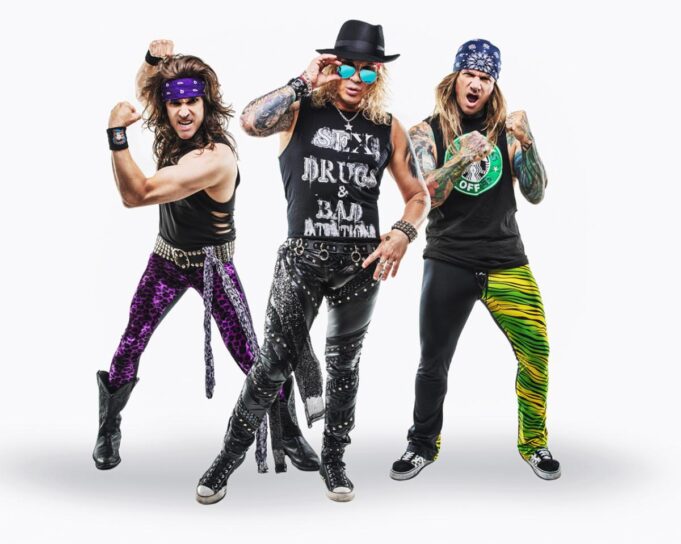 STEEL PANTHER LAUNCH THE ROAD TO THE ROAD BASSIST COMPETITION

As the music and hairspray world was recently rocked by the shocking news of the departure of their original bassist, California rock legends Steel Panther have been endlessly reviewing submissions from their global search for a replacement. Michael Starr, Satchel and Stix Zadinia have been watching over 1669 individuals submit their videos playing various songs from the band’s catalog as well as explaining why they would be the perfect replacement. The collective brain trust of metal’s sexiest trio has narrowed the submissions down to the final 32. In a March Madness bracket style competition, the band is reaching out to the public to help narrow them down to the final 8.

Each day, 2 new finalists will be posted online here and the public will have a chance to vote on who they think should be the band’s new bassist. Early entries by Rikki Dazzle and Rikki Thrash have made it to the finals and both musicians will perform live with the band during their December shows.

“Two Finalists are in, Eight More To Be Selected. That’s where you come in! Welcome to The Road to the Road Tournament! From over 1669 submissions, we’ve narrowed the field to the top 32 and we want YOU to help us determine the top 10! Every day between now and December 24th, we’re featuring two bassists as we work our way through the bracket below. All you have to do is check out the videos and vote for your favorites! Let the games BEGIN!!” exclaims Steel Panther.

Steel Panther will be rounding out the rest of the year with a handful of select tour dates. The band has eight shows remaining that will make stops in Las Vegas, NV; Louisville, KY; Columbus, OH; Indianapolis, IN; St. Louis, MO; Colorado Springs, CO; and Tempe, AZ. The band will be ringing in the new year in Suquamish, WA.

All information on tickets and tour dates can be found at: www.steelpantherrocks.com.

Earlier this year, Steel Panther decided to pay tribute to the legend Eddie Van Halen in the best way they know how – by going back to their cover band beginnings. The band recorded their interpretation of the seminal tunes “Beautiful Girls” and “D.O.A.” from the classic album Van Halen II. The songs have been some of Steel Panther’s favorites to play live and that became the inspiration to actually record them after all these years. The tracks are available via all streaming and digital platforms and the band filmed quarantine style music videos for each track.

The band has been hard at work at new material that will be released in 2022.

For the uninitiated, Steel Panther was formed in 2000. Hailing from Los Angeles, the epicenter for rock n’ roll in all its debauchery and glamour, Steel Panther has established themselves as the world’s premier party band, melding hard rock virtuosity with parody and criminally good looks. Steel Panther is a global phenomenon with four full-length albums, touring across the world, platinum-level You Tube status and high-profile television appearances such as Jimmy Kimmel Live, Larry King Now, and FOX NFL Sunday.

Check out the Live Music News and Review.com Facebook page for updates and announcements.
http://facebook.com/livemusicnewsandreview