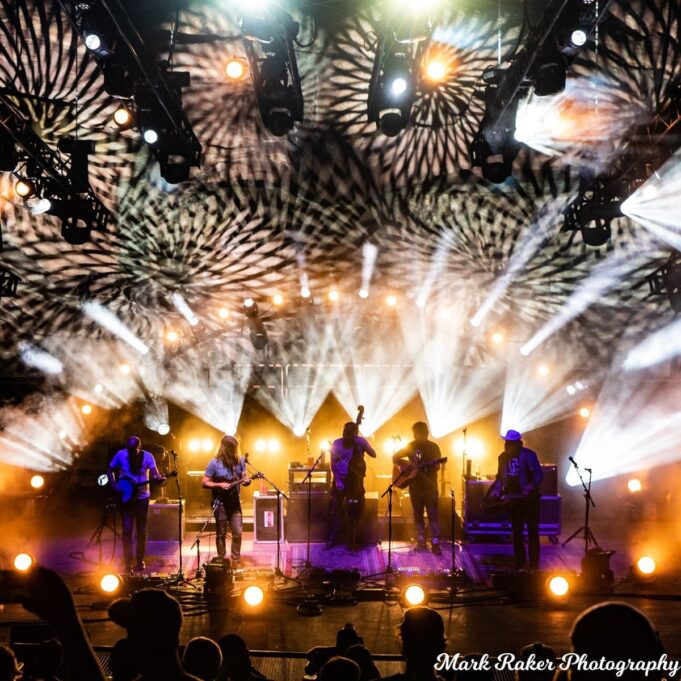 Greensky Bluegrass finished a three night run at Red Rocks this past Sunday night with Railroad Earth opening the evening and Holly Bowling joining on keyboards for most of the evening. The concert golden rule of Never Miss a Sunday Show proved true yet again as this show was a perfect confluence of all factors that make for a wonderful evening. It was the most beautiful Colorado weather, two high-energy jamgrass bands, a surprise guest appearance, joint band encores, and a natural setting that is well known as the jewel of outdoor venues.

Most of the sellout, dancing-room only crowd was capping off the weekend with their third GSBG show, yet there was great anticipation of a big night. The prior two evenings had Lukas Nelson & Promise of the Real and Circles Around the Sun as openers, and this evening, though scheduled to start a bit earlier, had a bluegrass festival flair about it. Railroad Earth opened the show with an almost seamless triad of Hard Livin->Mighty River->Long Way to Go, that had us trying to catch our breaths as they then played Bird in a House. They continued to celebrate their 20th anniversary year with a 10-song set that included additional favorites of Grandfather Mountain, Dandelion Wine, and Smile like a Buddha. Though a timeless story of an east coast peak in the Blue Ridge Mountains, RRE’s Grandfather Mountain seemed quite the fitting tune for this amphitheater naturally nestled in the foothills of the Rocky Mountains.

Check out the preview of the Cabinet show OCT 2 in Pennsylvania.

Though no stranger to performing at Red Rocks, you could see in their faces a complete appreciation and awe for the beauty of their surroundings. I, for one, had flown out from the east coast for just this show, having been nearly 20 years since I had seen a live performance at Red Rocks – Railroad Earth set up the night for what will be a memorable event for a long time.

By the time Greensky Bluegrass hit the stage, the crowd was wildly warmed up and the sun started to fade behind us into the mountains. They are a hard to define band, very jammy, rockgrassy, with a guaranteed long night of improv jams threading through their setlist. Hailing from Kalamazoo, Michigan, they looked extremely comfortable taking the stage for their closing night, as they’re also no stranger to Red Rocks. I wasn’t at either of the two prior GSBG shows, but heard repeatedly that each night that they were both also strong and entertaining.

They opened with Monument,off their newly released album Stress Dreams. It was jokingly referred to as a response to the woes of Covid, and they are clearly happy to be back on the road. The band is used to playing nearly 175 shows a year and touring tirelessly. With the high energy that they constantly deliver, they launched into a long 10-song first set that included the first surprise of the evening – Anders Beck invited Holly Bowling out to join them and they launched into Broke Mountain Breakdown, with a quick jam interlude into Blues Image‘s Ride Captain Ride and back into finishing Broke Mountain Breakdown. They closed the set with Holly and Paul Hoffman performing a duet of Windshield. I had seen this same rendition in DC’s Anthem several years ago when Holly and Ghost Light opened for Greensky, yet the majesty of Red Rocks and the energy of the evening eclipsed anything I recalled of that night.

The set break was extremely welcome as I needed the rest as well as an opportunity to catch my breath. Not having much time to acclimate to the higher altitude, this sea-level guy found the thinner air and inspired dancing almost a bit taxing, almost. It’s a good thing we train for this shit, as a friend of mine often reminds me, and his stickers stating the same were seen throughout the venue.

This was also Holly Bowling’s debut Red Rocks appearance – hmmmm, I guess that the piano and organ on stage was a bit of a giveaway before she took the stage. I’ve seen Holly perform many times – with her personal interpretive flair of Dead and Phish, sometimes solo, and also with various projects that she’s constantly involved with, and she seemed so comfortable playing with Greensky that one could easily assume she’s been grassjamming her whole life.

I noticed during the break that the techs were tuning the piano that was still on stage and that was an anticipatory clue for what was to come a few moments later. When GSBG returned to the stage after the set break, Anders asked if it was ok that Holly continued to play with them… well sure, ok, why not. Duh.

Act Two of fun continued and included long jammy presentations of OneWayOut and Don’t Lie, and another cut off the new album, title song Stress Dreams. Anders, on the dobro, mixed it up with many lead trades with Holly, and not only were the fans impressed and bowled over, but the appreciative awe was evident with Paul Hoffman as he looked over towards Holly and also dueled riffs with her. The long six song second set included another familiar cover teases, and featured continuous lead trades between Hoffman, Bowling and Beck. Anders did look up at the crowd several times as if to say, yeah, yeah ,did you hear that too?

Check out the preview of the Cabinet show OCT 2 in Pennsylvania.

Not to be done with the surprises, Greensky invited Railroad Earth out for the encore, and were joined by Tim Carbone, John Skehan and Todd Sheaffer. It was every bit of wow->OMG->WOW as they jammed Greensky’s Leap Year seamlessly into Railroad’s Head back into Leap Year. The bands have a long history of playing together, jointly headlining festivals, and numerous other collaborations. Greensky’s second studio album, Tuesday Letter, was produced by Tim Carbone.

Aside from how wonderful the music was, this show was my opportunity to fulfil another bucket list item. I’ve had the pleasure to photograph both bands multiple times and in over a dozen different venues. Being able to cover the show as a photographer as well, and at Red Rocks no less, was another feather in the memory cap for the trip.

Also, while in Colorado just for the weekend, I was fortunate enough to catch another show Saturday night during my trip. Phil & Friends was at Planet Bluegrass just north of Boulder, also finishing their three night run in Colorado. My first time at that venue too, and what really tied the weekend together was that Holly Bowling was touring with Phil Lesh as one of the Friends – the weekend was truly a special doubleheader dose of Holly. It was definitely one of the best play dates ever.