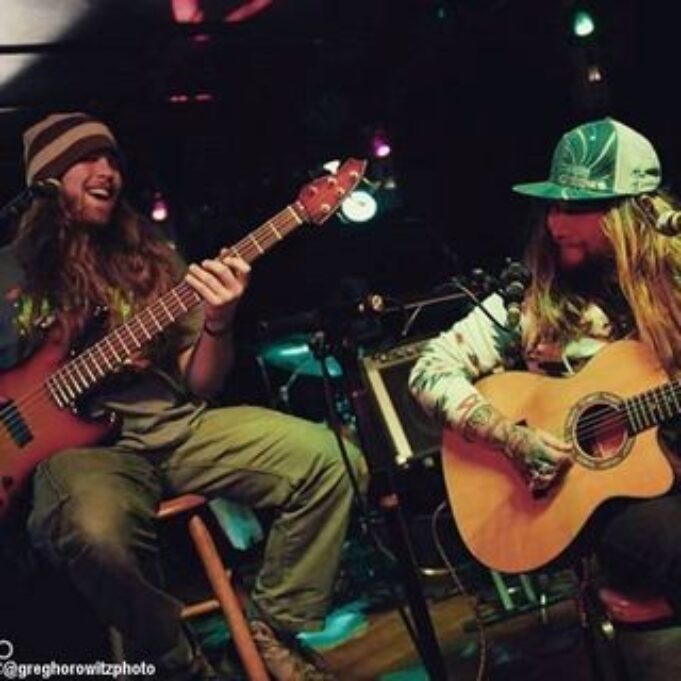 On the 16th May 2021 Mount Kisco NY was the host of a Tree of Life concert featuring Gubbilidis. Review by Jimm O’D.

How long has it been?   How long ago was it that Twiddle first slayed at Red Rocks?

That was right about when I started falling off the ‘band’wagon. Covid killed it for real, but I had been slowing down over a couple-year spell anyway. I might have been getting old.

I am aware of that now; this was the year when it got real for me. Every guy has his age- women too, but it’s a ‘thing’ for men especially. Forty for some, fifty for others; maybe forty-five or fifty-five as well. Sixty-two for me. I know it now. I am ‘old.’ Not “pushin’ sixty,” not “just sixty;” not even “barely” or “just past” sixty. sixty-f’in-TOO.

There’s maybe like a hundred people here. A good number of ’em are “of an age” as well; in fact, prolly less than half are under it (whatever ‘it’ is)… thirty-something, I suppose.

Of course, the vibe is totally frend-ly. I’ve just been chatting with a forty-year-old, here with her husband, and she was emphatically proclaiming the virtue of Gubbilidis and other Twiddle-ish endeavors. It’s the wholesomeness, the spiritual uplift without necessarily any substance-assistance. Jam ain’t even her bag in fact; she’s mostly all about Madonna and Cher. But here… here in the Twiddle-verse… it’s the vibe. It’s the frends. This lady found herself converted upon first exposure.

So, whassup with this? How did I suddenly, in the almost-spontaneous sense, find myself here in someone’s back-yard at a private-party/ Gubbilidis show? In a word: opportunism. I noticed a post on the iTwiddle Facebook group’s page to the effect of “free ticket.” I hadn’t been Twiddled in a while. So I checked the mileage and found it to be less than the drive for a day of Spring Skiing, and I somehow managed to give up one of said days- and there ain’t many of ’em left.

So I posted the comment “I’d hit that.” I was the first I guess.

Mihali and Zdenek are at least as tight as ever; maybe more so. They certainly have had lots of time to get even better at this good thing. I can’t imagine there being another acoustic-guitar-and-bass combo as artful and exciting as this one. Mickey’s pyrotechnics are nothing short of amazing, of course- meaning the playing, the looping, the overall effect of it all; and it’s a lot of fun when he picks up the sticks or percusses with his aerophonc organ. He has some 60’s psych guitar going these days too, sounding really quite electric with his acoustic six-string.

And Zdenek… possibly the most virtuosic bassist since Jaco or Billstock. I’m thinking that it has been long enough since my last encounter with the Norse God that he has become not only better (natch), but more comfortable. He is a young’un, ya might know, and this whole scene was pretty new for him, lo those many years ago. Now, he has been at it long enough to cut his hair and then grow it back. So what we’re getting from him these days is MORE. More is good. He steps out more; he smiles a lot more; and he plays a butt-load more Lead Bass than he used to. Which is how it is with this kid- there are bass solos, and there is Bass as Lead instrument. This is a function, we can be sure, of miles travelled rather than just improvement. Zdenek is more comfortable in his amazing-ness, having grown into it by now; and it ain’t about ego either.

These guys even have some o’ that smoke-across-the-stage stuff going on tonight- pretty sure that’s a new thing.

The song-spread is about what’s to be expected: there’s no way to know what to expect. Some Twiddle songs, some solo songs, some ‘classics’ (those are the ones I know) and a bunch of new stuff. And a Dead song in the middle of the second set, opening up a third slot for the host to step up and step in with his guitar and voice. The stage hands took care of that.

Wait… stage hands? I remember when ONE stage guy was brand-spanky-new; they introduced him at The Spot in Providence- at their OLD location, I mean. And that was Twiddle, the full band. So now we have a stage crew (as in, more than one) in tow with the side-project!

Like I say, there’s been a lotta time gone by for the writing part of the creative process. The current sum of these guys and the state of their art at present is more of what works, more rapor between them, more of what has been their particular and fascinating slice of musical life for a few years now. We wouldn’t want to say ‘better’ as if they ever weren’t, but they haven’t lost any of their unique charm or their virtuosic chops, nor have they stood still- they have been growing.

Not from this show, but some fun Gubbilidis featuring Lowell Wurster: