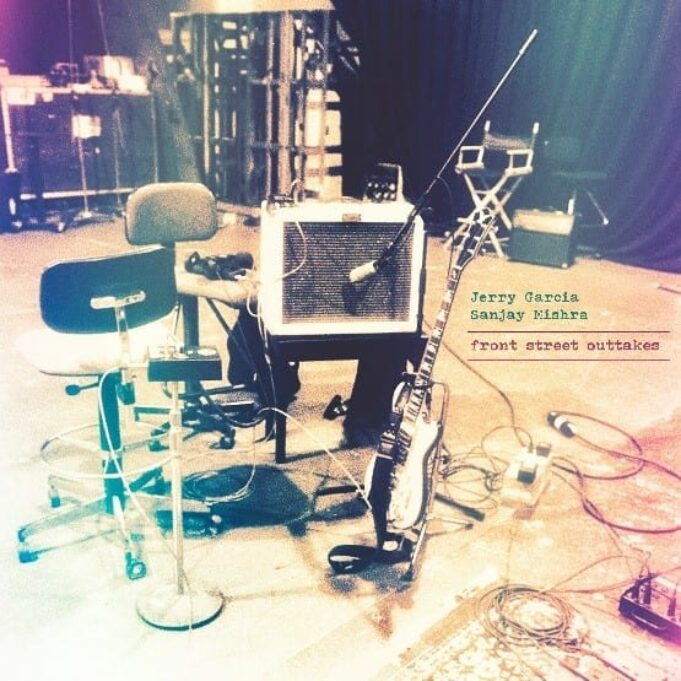 “Front Street Outtakes” is based on rare studio material sourced from a recording session between the Grateful Dead’s Jerry Garcia and Indian American musician Sanjay Mishra.

SAN FRANCISCO — Jan. 5, 2021 — The Jerry Garcia Music Arts label will release a new album titled “Front Street Outtakes” on January 5. The album tracks are composed of studio outtakes from a 1994 recording session featuring Jerry Garcia of the Grateful Dead and Sanjay Mishra, an Indian American guitarist-composer. The collaboration showcases a new direction the ever-creative Garcia was beginning to explore on his musical journey.

The unreleased recordings on “Front Street Outtakes” represent one of Garcia’s last full album recording projects completed at the Grateful Dead’s iconic Club Front Studios. The recordings originate from unedited material used in the creation of the 1995 album “Blue Incantation.”

As with all of Sanjay Mishra’s work, the music on the album has a multicultural and eclectic appeal. It merges Eastern and Western influences, combining Mishra’s brilliantly Indian-inspired guitar textures with Garcia’s masterful musical fluidity.

Jerry Garcia Music Arts will donate 25% of its net revenue from every digital music stream of the album to Self-Realization Fellowship.

“Front Street Outtakes” was mastered by Grammy Award-winning audio engineer David Glasser. The album will be available on most digital streaming platforms.

As seen on the album cover, Jerry played the Eagle guitar for this recording — the first of several custom instruments built for him by Luthier Doug Irwin in 1971. It is noteworthy that a Sanskrit prayer for happiness is inlayed on the guitar’s fingerboard.

Reflecting on the music that he produced with Garcia, Mishra commented, “Unique and mysterious, these mixes consist of the recordings in pure form, with just the guitars and percussion, all unedited, including the tape reel running out on the first track.”

Referring to the first track, production consultant Philip Melia, a Liverpool native and guitarist for the Pete Best Band, discussed the soul-touching “Loving Sky” experience: “Starting with a sparse and flowing luscious sound, bound to a honey-dripping solo guitar and organic tabla percussion, listen whilst looking at the sky and you can be anywhere.”

In a conversation with Livemusicnewsandreview.com further clarified about the three songs. Back when these tracks were recorded, Sanjay Mishra was granted full creative opportunity with the tracks that were recorded and the resultant album included additional production and interpretation. This release reflects the music as it was created on that day, what the musicians heard in the studio before any artistic or production license was taken. This is the original product of the recording session.

The visual elements of this music release include a booklet of liner notes featuring rare in-studio photos of the recording session along with Garcia’s music-themed pen-and-ink drawing “Uncorrected Manuscript.” This image, in its unedited and pure form, can be interpreted as a visual metaphor for the recordings on “Front Street Outtakes.”

The liner notes booklet and newly published limited-edition giclées of “Uncorrected Manuscript” are available at the Terrapin Gallery website.

“It is an honor to support Paramahansa Yogananda’s teachings with my late husband’s music,” said Manasha Garcia, co-producer at Jerry Garcia Music Arts. “There’s an interesting circularity to this project, as my grandfather gave me his copy of ‘Autobiography of a Yogi’ to read when I was a teenager.”

Sanjay Mishra is an Indian American musician and a graduate of the Peabody Conservatory of Music. Mishra plays with an eclecticism influenced by his multicultural background. You can learn more about his work at www.mishra.net.

Since 1920, Self-Realization Fellowship has been dedicated to carrying on the spiritual and humanitarian work of its founder, Paramahansa Yogananda, widely revered as the father of Yoga in the West.

The SRF is a worldwide religious organization with international headquarters in Los Angeles. As expressed in the Aims and Ideals formulated by Paramahansa Yogananda, the society seeks to foster a spirit of greater understanding and goodwill among the diverse peoples and religions of our global family and help those of all cultures and nationalities realize and express more fully in their lives the beauty, nobility and divinity of the human spirit.