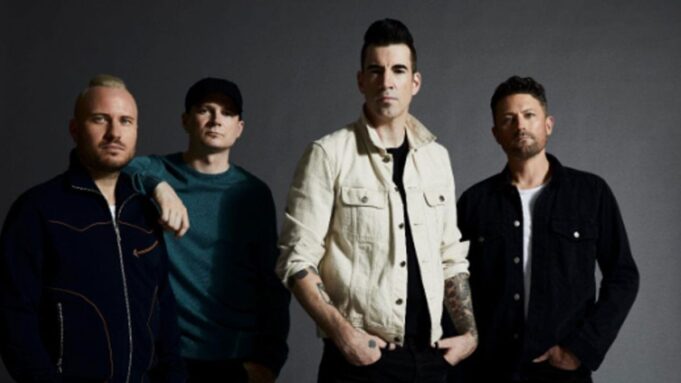 New Album, Say Nothing, Out January 31st on Atlantic Records

Ahead of the release of their seventh studio album Say Nothing, out January 31st via Atlantic Records, multi-platinum band THEORY (Theory Of A Deadman) has announced a U.S. headlining spring tour. In the spirit of Giving Tuesday, the band has partnered with PLUS1 so $1 from every ticket sold for the upcoming outing will go to support organizations dedicated to breaking the cycle of domestic violence and building a community free of abuse.

Since the release of their hit radio single “History Of Violence,” a powerful song that turns the tables on a story of domestic violence, THEORY has been encouraging anyone affected by domestic abuse to call the National Domestic Violence Hotline (1-800-799-7233) for help. PRESS HERE to watch the gripping video for “History of Violence,” illustrating a searing snapshot of a woman enduring an abusive husband as she plans to fight back, eventually ending up in jail but free of her abuser.

The 22-date headlining tour, featuring special guest 10 Years, commences April 10th in Columbus, OH and takes the band across the country stopping in such cities as Louisville, New Orleans, Charleston, Cleveland, Minneapolis, Milwaukee, Des Moines, Kansas City and Tulsa before wrapping May 16th in Colorado Springs. Pre-sale tickets for the U.S. headlining dates are available starting Wednesday, December 4th with the public on-sale beginning Friday, December 6th at 10am local time. See below for the full list of upcoming tour dates and visit www.theoryofficial.com for all ticketing details.

THEORY will also make appearances at 98 Rockfest in Tampa, Earthday Birthday in Orlando, WDHA’s Rock The Rock Fest in Newark, NJ and WAAF Big Gig in Worcester, MA during the tour. The new U.S. dates follow THEORY’s Canadian headlining tour that kicks off January 31st in their hometown of Vancouver with the first of two nights at The Commodore Ballroom to coincide with the release of Say Nothing.

On Say Nothing, THEORY is speaking up through timely lyrical commentary that finds the band’s finger on the pulse of the current climate and the issues that our society is grappling with today, threaded together with a message that’s both a cautionary warning and a hopeful wish for our collective future. Addressing the current tense state of American politics and the divisive nature of our culture, new song “Strangers” strikes a chord with its thought-provoking prose, calling out how nasty it has become between those with differing political affiliations and our society’s increasing inability to openly listen and relate to one another.

Say Nothing is available for pre-order now at all DSPs and each pre-order includes an instant download of “Strangers” and lead single “History of Violence,” which has already racked up more than 3.5 million collective streams, has just broken into the Top 10 at Active Rock Radio, and has been featured on key playlists across Spotify, Apple Music and Amazon Music, including Spotify’s New Music Friday. Album and bundle packages are also available at the official THEORY webstore.

Peeling back the layers of THEORY’s depth and breadth like never before, Say Nothing, recorded in London with producer Martin Terefe [Jason Mraz, Yungblud], is a continuation of their musical and thematic evolution, displaying the band’s powerful storytelling in full force and introducing fresh sounds and sonics. With undeniable anthems, scorching songcraft, experimental vision, rock ‘n’ roll attitude, and clever pop ambition, THEORY explores domestic violence, racism, the divisiveness in American politics, anxiety and depression, and more on the 10-track album.

THEORY’s platinum single “Rx (Medicate)” from 2017’s Wake Up Call addressed the opioid epidemic and racked up more than 250 million streams, became their third #1 on the Billboard Hot Mainstream Rock Tracks chart, and received an iHeartRadio Music Award nomination for Rock Song of the Year.

PLUS1 raises and grants millions of dollars to high impact nonprofits addressing our most serious global challenges around Access, Equity, and Dignity. Through partnerships with concerts and live events, the work begins with a $1 per ticket add-on that makes fundraising simple and seamless. Beyond the show, PLUS1 supports artists and cultural leaders as educators and advocates, fueling their passion, reach, impact. To date, PLUS1 has raised and granted over $8 million, and served as the connective tissue between over 100 artists, millions of their fans, and hundreds of leading social and environmental justice organizations.