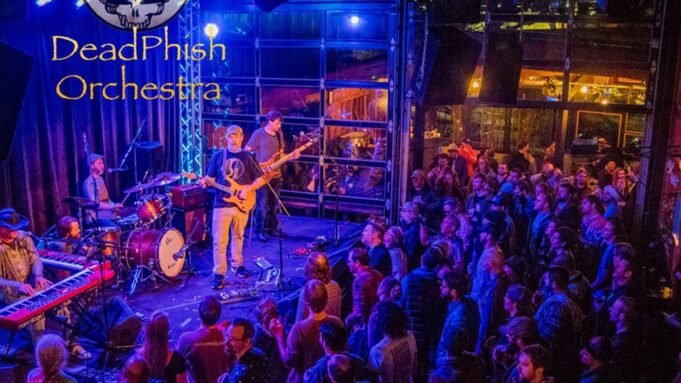 DeadPhish Orchestra is a delicious hybrid of- well, you could probably guess the two jambands to whom the four-piece pays tribute. The band from Denver celebrates their 10th anniversary with shows throughout December, beginning in Alaska on Friday the 6th and concluding with a 5-night hometown run at Be On Key Psychedelic Ripple from the 27th till New Year’s Eve.

3 of the 4 members of DPO (Paul Murin, Chris Sheldon, Brian Adams) toured the country as Phix (the OG Phish tribute) from 2001-2008, performing over 500 shows together. 2008’s Langerado Festival at Big Cypress in Florida, where they played a marathon 3-hour late-night set, was one particular highlight of this time in the fledgling band’s history. In 2009, they picked up a few casual gigs doing Grateful Dead covers with some other friends. An extended jam on the Dead’s “Here Comes Sunshine” organically morphed into a jam on Phish’s “Bathtub Gin,” and the idea for DeadPhish Orchestra was spawned.

New Year’s Eve 2009 was their first official show billed as DeadPhish Orchestra, with longtime friend Ted Tilton on keyboards. It happened at Owsley’s Golden Road in Denver. While that venue no longer exists, owner Jay Bianchi continues to host live music at his new venue, Be On Key Psychedelic Ripple, where DPO does a 2+ night run of shows every month.

Over the course of the last ten years, DPO has played around 750 shows together, from coast to coast. Between Phix and DPO, the guys in the band have almost two decades of experience playing music together. They are expert-level improvisers and move through their jams with one mind. DPO tries to stick close to a 50/50 ratio of Dead and Phish, and they continue to be remarkably creative in coming up with segues and mashups between the two bands. Their repertoire has grown to well over 300 songs. Some segues are musical, with songs that can morph smoothly from one to the other due to similar rhythms and common keys. Other segues might be based on thematic similarities between songs (like “Silent In The Morning Dew”).

DPO celebrates their 10th anniversary all December, with two shows in Alaska (Dec. 6-7), which will feature Dave Hebert on guitar (JGB veteran), plus 6 shows in Florida (Dec. 10-15), and they cap it off with a 5-night New Year’s Eve run in Denver (Dec. 27-31). This run will feature guest sit-ins, a horn section, and the usual mind-bending jams. Don’t miss out! Is DPO coming to a town near you? Check out their tour dates below:

Stay in touch with DPO: