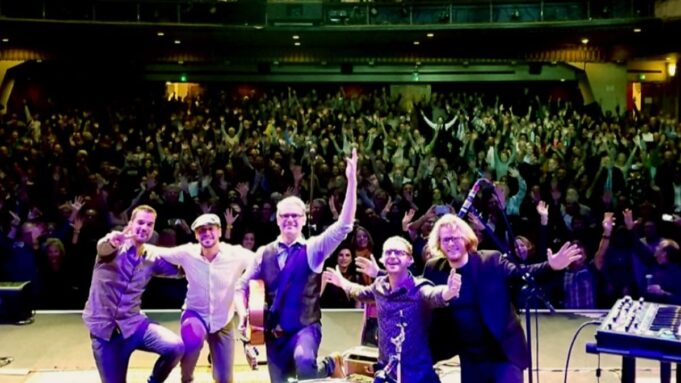 All-instrumental music is an acquired taste and may not be for everyone. But after listening to Jesse Cook and his band play live, that would be the exception those rules.

The JUNO Award-winning musician made a non believer or less than interested person a convert at a recent show at the Saban Theater on November 14th in Los Angeles, CA on his current “Follow The Road” U.S. tour- though he did adventure out of the all-instrumental realm and do one vocal performance. He sang a nice cover rendition of “Say Something” by A Great Big World, and it was a solid effort. Yet it’s his masterful, intricate, fluid and melodic finger-picking guitar technique/playing and musicianship is what captivated and won him a large following over the years. That was outstanding and was greatly balanced by a lively and entertaining show giving it more a commercial, accessible touch.

The Canadian artist is not only a virtuoso acoustic guitarist, but an engaging and gregarious frontman that frequently talked to his fans. Cook kept that intimate connection going through stories and anecdotes he shared with the audience. One particularly moving and inspiring story was about his current guitarist performing on this tour. He wrote Cook online 10 years ago as a very young fan and sent him video links of him performing his instrumentals. Cook said, smiling and laughing, and commented, they were better than his versions. Over the years, they both remained in contact.

The guitarist went on to study with the masters in Europe and they played together onstage and now they are touring together. The enjoyable show was a passionate, high-energy affair. Cook and his excellent group had a way of playing their respective instruments that touched your soul and emotions not only with their technical gifts that are so extraordinary but there was also a warmth, love and respect they have for one another and camaraderie emanating from the stage, making music is their life’s calling and the crowd could feel that.

Cook is a generous, humble bandleader that allowed each band member to shine and solo individually and introduced them frequently by name to the audience. Jesse Cook has many talents among them as a composer and producer and is widely considered one of the most influential figures in Nuevo flamenco music. He also incorporates aspects of rumba, jazz and world music in his work and it’s quite an eclectic mix live.

That diversity of sounds and styles gives this hybrid its originality, edge and spice, so to speak. His latest album, Beyond Borders, is reflective of that. Cook has had a very long and accomplished career having releasing several studio and live albums and winning many awards. In fact, he mentioned on this tour he is celebrating the 25th anniversary of his first studio album, Tempest, and he performed the title cut, “Cascada” and “Baghdad.”

Many other songs were featured from his vast catalog of material including “Luna Lena,” “Cafe Mocha,” “Havana,” To Your Shore,” “Wed Ngt at Etric’s,” “Luna Llena,” “On Walks The Ngt,” “Once,” the wonderful “Viva,” “Cafe Mocha,” “Shake,” “Cascada,” “Switchback,” and “Bogota By Bus.” The crowd-pleasing “Rumba Medley” got the audience on their feet dancing. Jesse Cook encored with “Mario,” “Fall At Your Feet” and “Early On Tuesday” to the delight of his enthusiastic fans.

Jesse Cook and his backing band put on a satisfying show that played to and showcased their many strengths and gifts as musicians that was dazzling to watch. Beyond the technical flights of fancy, the audience was even more invested viscerally on another level. This was because Cook struck even deeper and more profound chord with fans letting them get to know him through the personal expression of his vulnerability, humility and wry sense of humor.

Drop us a line at [email protected] to submit your review or story idea.