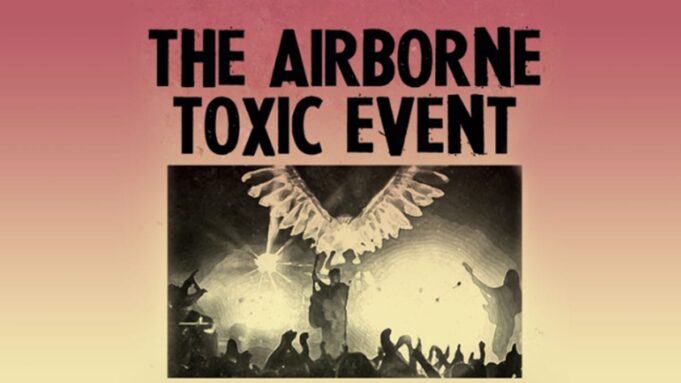 The Airborne Toxic Event has announced North American tour dates in support of their landmark new album. The tour starts May 27 at Van Buren in Phoenix, AZ and ends with a very special performance with the SF Symphony at Davies Hall on August 1. The Los Angeles-based band’s sixth LP and first new music in half a decade, HOLLYWOOD PARK is out Friday, May 8 via Rounder Records. Pre-sale for the tour begins this Wednesday, November 20 through the band’s site with the tickets being available Friday, November 22.

HOLLYWOOD PARK arrives alongside a major new literary work of the same name by Airborne Toxic Event founder and frontman Mikel Jollett, to be published by Celadon Books  (a division of MacMillan) on May 5, 2020. Hollywood Park sees Jollett chronicling his extraordinary personal journey, from his early childhood in one of the most infamous cults of the 1970s, through a teenage life of poverty and emotional abuse, before finding his voice first as a critically acclaimed writer and then literally as singer and songwriter of The Airborne Toxic Event.

Produced and mixed by the band’s longtime collaborator, multiple GRAMMY® Award-nominee Mark Needham (The Killers, Fleetwood Mac), HOLLYWOOD PARK serves as both companion volume and musical soundtrack to Jollett’s remarkable memoir, adding vivid sonic color to his wrenching and ultimately life-affirming personal chronicle. Indeed, both the album and book were fueled in large part by the untimely death of Jollett’s father. Devastated to his very core, he withdrew from both the world and his work for nearly a year before ultimately finding the strength to begin anew.

Prior to their North American tour The Airborne Toxic Event will herald HOLLYWOOD PARK with a pair of hugely anticipated four-night-stands at Los Angeles, CA’s El Rey Theatre (March 31, April 1, 2, 4) and New York City’s Bowery Ballroom (April 7-10), with all eight shows sold out within 30 seconds of ticket release.

The Airborne Toxic Event first emerged in 2006, centered around the powerful songcraft of Mikel Jollett, already an acclaimed freelance journalist, editor, and writer whose work had appeared in such prestigious publications as McSweeney’s, the Los Angeles Times, and FILTER, among many others. The band’s self-titled debut album followed two years later, highlighted of course by the breakthrough hit single, “Sometime Around Midnight,” an RIAA gold-certified, top 5 smash on Billboard‘s “Alternative Songs” chart, later ranked at #1 on iTunes’ “Best of 2008: Alternative” tally.

The Airborne Toxic Event spent much of its time on the road in the years that followed, including sold out world headline tours, countless international festival sets spanning Coachella and Lollapalooza to Japan’s Fuji Rock and the UK’s Reading/Leeds, and more. Known for their epic sonic energy and potent showmanship, the band have performed with a number of American symphony orchestras – including the Louisville Orchestra and the Colorado Symphony Orchestra — in addition to collaborations with the Los Angeles-based Calder Quartet, the Lalo Guerrero School of Music Choir, and Los Angeles’ Belmont High School Marching Band, among others.

HOLLYWOOD PARK marks The Airborne Toxic Event’s first new album since 2015’s DOPE MACHINES and its limited edition companion volume, SONGS OF GOD AND WHISKEY, both followed in 2016 by the standalone single, “America.” DOPE MACHINES in particular was greeted by a rush of critical acclaim, with the Los Angeles Times raving, “the record marks a profound sonic turnaround for the band; instead of the yearning post-punk and folk flourishes of prior releases, they’ve picked up a minimal, purposefully synthetic sound, drawn from frontman Mikel Jollett’s new investment in production techniques.” “Never before have The Airborne Toxic Event sounded as freewheeling and creatively uninhibited as they do on DOPE MACHINES,” declared Atwood Magazine. “Dark electronic indie rock is applied in both minimalistic and anthemic settings to create a panoply of new sounds with catchy hooks… It reads like a book from start to finish, featuring hooks, engaging passages and a few surprise twists and turns.” DOPE MACHINES is “moody and dead serious, layered with deep cushions of synthesizers and airy echoed backing vocals,” wrote the Los Angeles Review of Books. “(Jollett’s songs are) vividly mindful of the high stakes for men and women whose primary experience of the world is that they are solitary beings surrounded by an ‘endless expanse of space,’ and who believe the only way to cross that expanse is to give oneself up to love.”

THE AIRBORNE TOXIC EVENT ON TOUR 2020