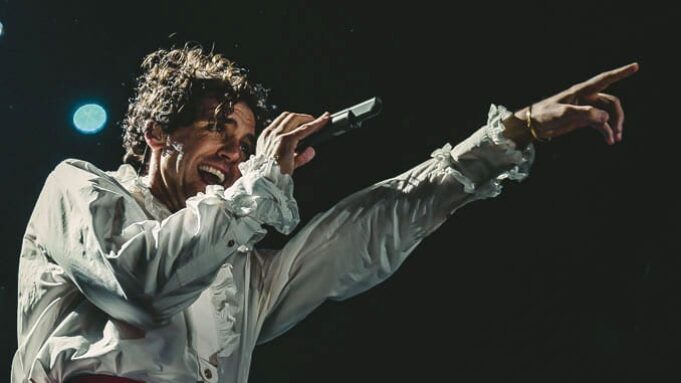 It’s been ten years since MIKA has performed at the Fillmore in San Francisco, but on Wednesday, September 18 he finally returned.

He started his energetic set with “Ice Cream” a song from his upcoming album, “My Name Is Michael Holbrook.” The record is set to come out in just a few short weeks in October. Throughout the night, MIKA was dancing and jumping around the stage while
delivering flawless vocals.

He also had the crowd singing along to his songs; the crowd favorite was “Origin of Love” because literally, everyone knew the lyrics. While MIKA is incredibly talented, he is also funny. This unique artist told us how he was at a coffee shop somewhere in San Francisco and kept asking people how to get to the Fillmore. No one there ended up helping him, so he had to walk for an hour and twenty-five minutes to get to the venue. He was all sweaty when he arrived but still got there before everyone else, so he just started dancing in the middle of the empty room. After sharing that story, he performed “Big Girl” where he ended up in the center of the crowd dancing just like he did when nobody was around.

As the night was coming to an end, he sang “We Are Golden” the first single from his second album, “The Boy Who Knew Too Much” which was released back in 2009. Luckily it was a fake-out, and he came back out with an encore of three songs. “Grace Kelly,” “Tiny Love” and “Stay Hi.”

If you have the chance to see MIKA, I would recommend it. International fans are in luck as he will be touring internationally until the end of 2019 and the beginning of 2020.

Setlist as reported by riffraffmagazine.com

International musical sensation Mika opened his career in 2007 with defining single Grace Kelly, which sold over 3 million copies worldwide and was the second British single ever to top the chart on downloads alone. The debut album, Life In Cartoon Motion, went straight to #1 in UK and 11 other countries, going on to sell over 7 million copies worldwide, plus over 6 million single sales.

His 2nd album The Boy Who Knew Too Much went top 10 in 11 countries and his 3rd, The Origin of Love released in 2012, saw collaborations with Pharrell Williams, Nick Littlemore and Ariana Grande, amongst others.

Mika has been nominated for and won awards from the Brits, the Grammys, the Ivor Novellos, World Music Awards and MTV’s Europe, Asia, Australia and Japan, Capital Radio Awards, Q Magazine, BT, Vodafone and Virgin Media, amongst others. He is also the recipient of the prestigious French award “Chevalier dans l’ordre des Arts et des Lettres”.

His contagious joy and colourful performances have delighted audiences from the beginning and have led to sold out tours worldwide. His videos have racked up an impressive total of over 250 million views!

In addition to his prolific music career, the ever in demand Mika was a season judge on both The Voice in France (and coached the winning contestant) and XFactor Italia in 2013 with both shows enjoying their best ratings ever. Mika quickly rose to superstardom in both territories and was so popular with viewers that both shows invited him to return for 2014/2015 seasons.