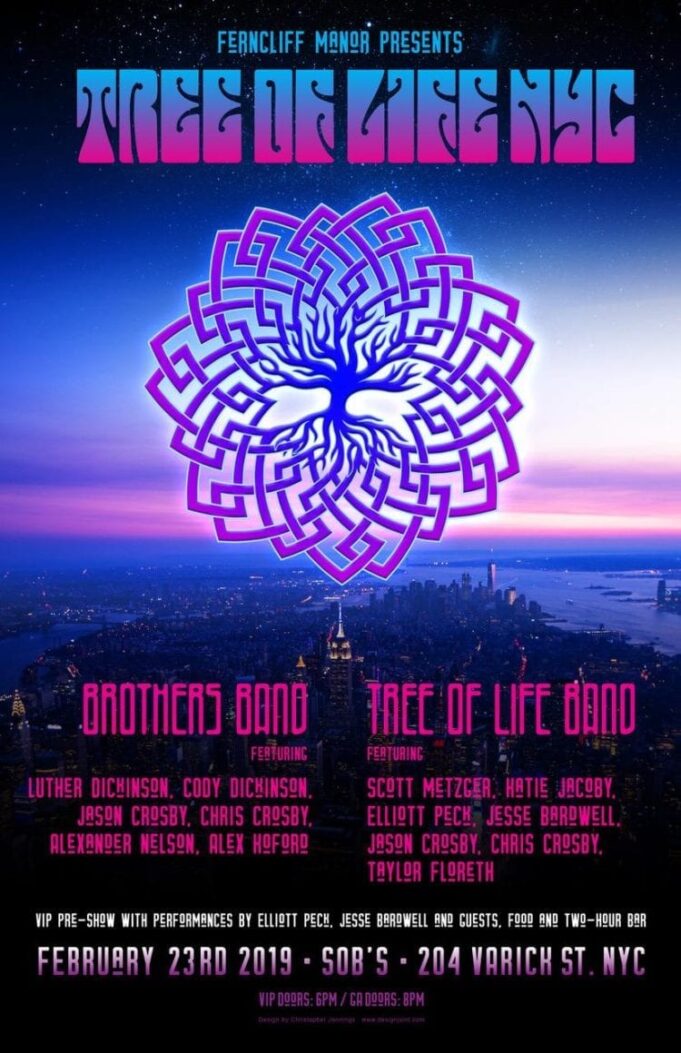 In roughly one and a half weeks, a special, possibly once-in-forever, lineup of NYC musicians will come together to serve a full evening and night of impromptu jams and rock and roll—and it’s all for a good cause. The night is called Tree of Life, and it’s set to go down on Sunday, February 23, at legendary performance space Sounds of Brazil, or perhaps better known to some as SOB’s.

Tree of Life is a six-time going fundraiser-driven event that gathers highly acclaimed music artists together for a several hour, multi-set showing of truly unique performance. This year’s gathering of artists actually includes two all-star lineup bands: The Brothers Band, and the return of the Tree of Life Band.

The Brothers Band will be headed by two founding members of the phenomenal North Mississippi Allstars, Luther and Cody Dickinson, and will be joined by Terrapin Family Band members Jason Crosby and Alex Koford, as well as Chris Crosby and Alexander Nelson.

The second lineup of musicians will comprise the very special Tree of Life Band: Joe Russo’s Almost Dead guitarist Scott Metzger, Katie Jacoby (currently, we should mention, set to tour around the country with The Who) and Taylor Floreth, drummer for Metzger’s solo project WOLF! The band will also feature Jason and Chris Cosby as well as close Terrapin Family associates Elliot Peck and Jesse Bardwell.

As mentioned, the reason these seasoned jammers are so willing to perform in such a setting is for the great cause at the center of the night. From the event’s press release:

Established by Rob Rosman in 2014, Tree of Life began as an

annual live music event which raised critical funds for the

continued needs of students, residential facility and programs at

Ferncliff Manor, an educational and residential facility in

Yonkers, NY, that serves children and adults with profound

developmental disabilities. The Tree of Life fund has grown to

performance event venue which will exist to support housing

and employment opportunities for adults with developmental

In addition to the music, this year’s event will host an auction off of a Martin guitar and rare art, donated by legendary photographer Jay Blakesberg, and VIP perks that include even more intimate performances from lineup members, choice food options, and more. In the city that never sleeps that is also one of the musical capitals of the world, incredibly special, collaboration-driven music happens all the time, the kind that you beat yourself up for the next day for missing.

Considering this lineup here, this is a must see show. A unique lineup and helping this great cause is a great reason to make it happen for any live music fan.

To purchase tickets for the event, head to this link.