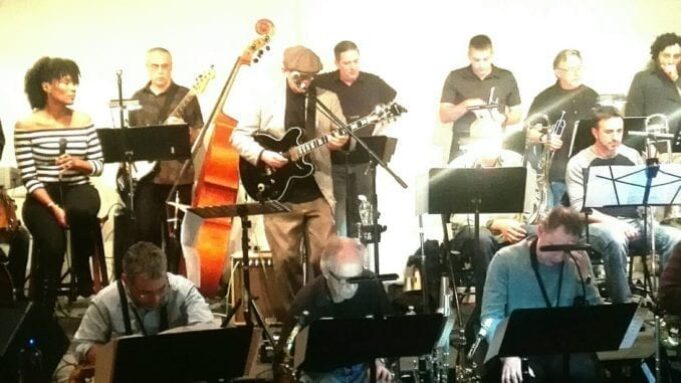 I do indeed like a crossover- you know, like Amy Grant hitting the mainstream pop charts before settling into the Adult Americana place that shows on her last couple of albums. ‘Crossover’ might not be precisely the most-best term to describe local hero Tommy Mac; he’s really more of a top-tier journeyman around the Western Mass area and beyond. An accomplished bass-player in addition to his first choice, some folks still don’t realize he’s really a guitar player primarily. Maybe that’s one reason he decided to start his own Clapton tribute band a couple of years ago; he now gets plenty of work with his axe of preference. Same for vocals- TMac does most of the singing in his Slowhand band.

Anyhoo, the ‘crossover:’ Mister MacCarthy is carrying his Clapton-jam to a jazz setting tonight; full-blown Big Band, in fact, and the very best we have here in the Pioneer Valley. Jeff Holmes invited Tommy Mac to join his Big Band as Special Guest for an installment of his long-running Monday night residency, currently holding forth at 121 Club. An austere and nicely-appointed performance space with a bar, 121 Club has been in the Eastworks building, restored and renovated factory facilities on Pleasant Street in Easthampton, for a good number of years now.

Maestro Holmes’ lovely and celeb-looking wife Dawning also takes the stage for most of this first set, even including a Clapton tune of her own choice (“Tears in Heaven”) before adding backing vocals to Tommy’s set. A word about Holmes The Missus: you can bet she’s heard the phrase, ‘lovely voice,’ a few thousand times in her life, but to these ears that word, ‘lovely,’ while appropriate and accurate, will leave out much in the way of substance. Earthy and grounded without being gritty, this is cleary a Real Singer. My guess would be that, observed in her own element, the listener will be treated to a balanced blend of vocal jazz and vocal blues… as in, jazz songs sung with a bluesy voice, and blues songs sung like jazz. That’d be my guess. We’ll have to research the matter further.

Now, Tommy- the MacMan, known to all and loved by most; he’s a feller with a whole lotta side-line miles under his belt. So, how cool is it that not too long after he stakes his own claim, he’s invited to guest with one of the uppermost ensembles around? One mighta fretted just a wee tad, concerned in a kind of a “small-town kid swims with the big fish” way. I think his state of mind was a little like that, anyway. All fears were allayed right quick, however. Turns out Tommy knows a number of guys in Jeff Holms’ Big Band; he has played with some among ’em for varying lengths of time. Between them, they could probably break away from the larger group and have all slots covered in a more common-type bar band.

Especially cool was the interplay between Tommy Mac and local legend Bob Ferrier. They got a couple of duet-sections going in some of the songs, and with a few of the horns making similar soumds in the transitions, it wad kinda like a ‘planned jam.’ And so it goes with jazz music-
improvisation within structure.

Tommy’s singing was the real attention-getter. He’s been doing a perfectly fine job with the Clapton vocsls; surprisingly well first time I seen it, I thought. But tonighr, he raised the level even a little bit more. Maybe it was the company- I coulda sworn I caught a whiff of a jazz singer in him tonight, like a touch of Torme tone; something velvety.

So when I think of ‘crossing over,’ as in coming frim one format and carrying compoments of it into another, I think of things like a Christian artist getting on the pop charts, or perhaps the most archetypal example would be fusion music- or fusion cooking. All three of tonights features at 121 Club can clearly cross over with competence and- there can be no doubt now, in the case of Tommy Mac- confidence.