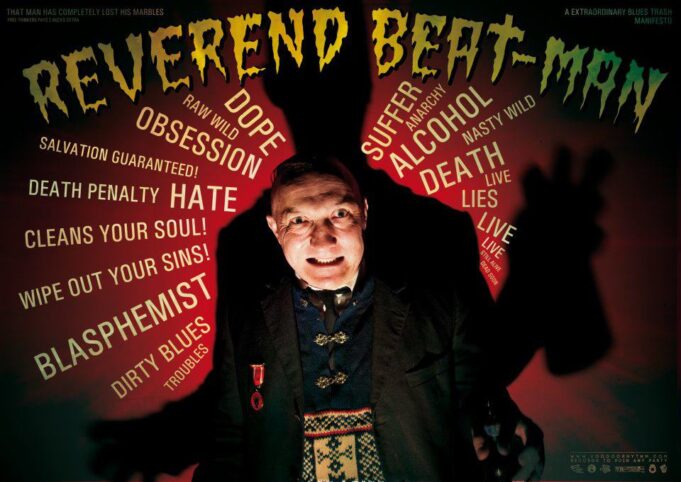 From Hell To Switzerland To The United States: Reverend Beat-Man and Nicole Izobel Garcia announce US Midwest/East Coast tour dates and Baile Bruja Muerto album release. Check out the Live Music News and Review.com Facebook page for updates and announcements. To submit an article or review, or to just say hello hit us at [email protected]  From the video channel of Mat Weir https://youtu.be/V2VBt3JCPMs?t=6 Globetrotting Swiss-American blues trash duo, Reverend Beat-Man & Nicole Izobel Garcia, announce an August – September tour where they will premier their broad-based spin of lo-fi psychedelic garage-blues punk to US East Coast & Midwest audiences. This trek marks their first venture into Middle America and along the Eastern Seaboard together, all confirmed dates below including a performance at the Tennessee-based dark country/heavy music subculture epicenter, Muddy Roots Festival.  For Beat-Man, emotions are high for some of these dates with his past experiences playing these parts of the United States with The Monsters.

“I haven’t played the East coast much; the first time was in 2003 with The Monsters at CBGBS. They hated us, we blew their PA and they wanted to sell us a video with a live show we didn’t ask for being a part of, which was strange. The same year, we played Maxwell’s in New Jersey and that was a big honor for us because of the history that venue shares. With Reverend Beat-Man, I did a show at the legendary Otto’s Shrunken Head and that was set up our friend Mike Decay and Kendra Psychobilly. Kendra followed us while in New York and later on became the booker at El Cortez in Brooklyn. Sadly, she passed away a year or so ago. Brooklyn will be emotional for me and for the people who know me from that time. I played at Toootles Pumpkin Inn with The Monsters in 2014 and the people there are amazing!! They have a very unique spirit, it’s very social and it feels like they care for you and your friends.” Reverend Beat-Man & Nicole Izobel Garcia’s collaborative album, Baile Bruja Muerto, will be available in fall on LP/Digital through Voodoo Rhythm Records. A record that marks five years of collaborative effort between the two transcontinental artists and a culmination of two different cultures and artistic sensibilities that reside on the outlier edge of contemporary music. “The key to this album is that there was never a cohesive plan, hell we didn’t even plan to not have a plan, we literally didn’t have time to even talk about it. Half of the songs we recorded together and have been playing for years, the other half was a complete surprise to the other person. We were both totally free, especially with the songs we each did on our own.. it really shows the strength of our trust and chemistries,” is how Garcia summarizes the creation process.   Advance copies of the LP will be available for audiences on this tour. Blues Trash, the first album of original material from Reverend Beat-Man in 11 years, is available now on LP/CD/Digital through Voodoo Rhythm Records as well. 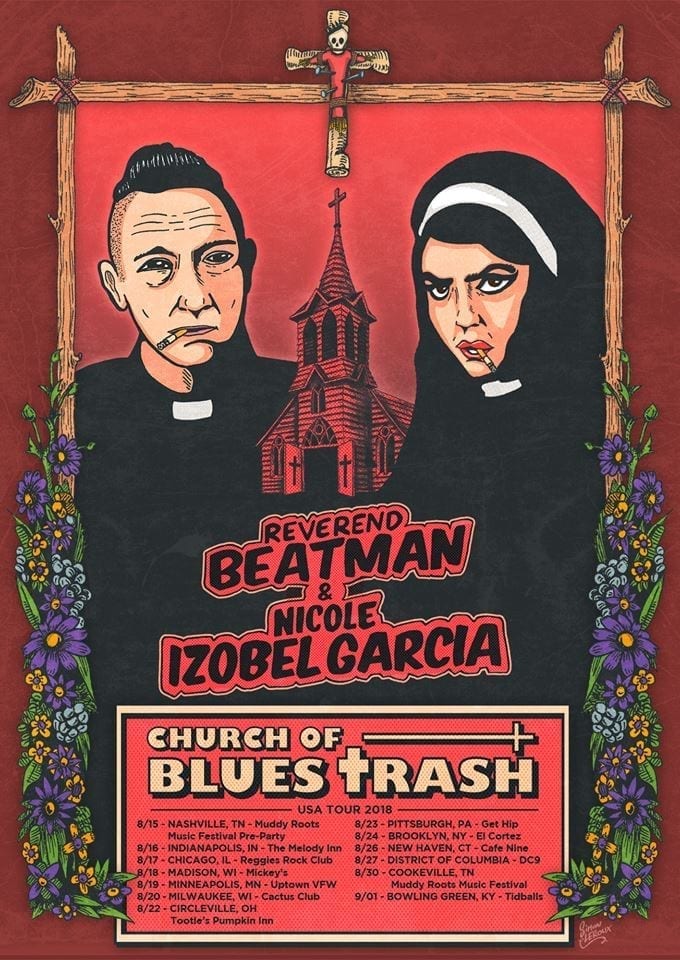 Saying that these two are workhorses is an understatement; this tour is their third together in 2018. Beginning with a three-week springtime run up the US West Coast into the Pacific Northwest and beyond, anchored an appearance at Debauch-a-Reno alongside The Mummies, The Gories, The Cavemen, and more. Shortly after their concluding show in Long Beach, CA at May’s end, the two assembled in Bern, Switzerland for a set of shows as Reverend Beat-Man & The New Wave. The New Wave includes Garcia along collective of prominent Swiss musicians who round out the backing band in the Blues Trash LP. Following the set of shows, Beat-Man and Garcia embarked on a two month tour across the European continent from June – July, where audiences from the UK, France, Belgium, Germany, Spain, and Switzerland gathered to witness their eclectic ceremony in converted churches, seedy dives, and festival grounds. For more information on Reverend Beat-Man and Nicole Izobel Garcia, visit Voodoo Rhythm Records online. From the video channel of rapido1 https://youtu.be/AJ8-JbMvkJ0?t=3 Reverend Beat-Man & Nicole Izobel Garcia tour dates 8/15 -Muddy Roots Music Festival pre-party (Nashville, TN) 8/16 – The Melody Inn (Indianapolis, IN) 8/17 – Reggie’s Rock Club (Chicago, IL) 8/18 – Mickey’s Tavern (Madison, WI) 8/19 – Uptown VFW (Minneapolis, MN) 8/20 – Cactus Club (Milwaukee, WI) 8/22 – Tootle’s Pumpkin Inn (Circleville, OH) 8/23 – Get Hip (Pittsburgh, PA) 8/24 – El Cortez (Brooklyn, NY) 8/26 – Cafe Nine (New Haven, CT) 8/27 – DC9 (Washington D.C) 8/29 – The Basement (Atlanta, GA)*just added 8/30 – Muddy Roots Festival (Cookesville, TN) w/Sleep, LA Witch, X, Wovenhand, Neurosis, Mondo Generator, The Calamity Cubes, Meat Puppets, and more. 9/1 – Tidballs (Bowling Green, KY) Check out the Live Music News and Review.com Facebook page for updates and announcements. To submit an article or review, or to just say hello hit us at [email protected]