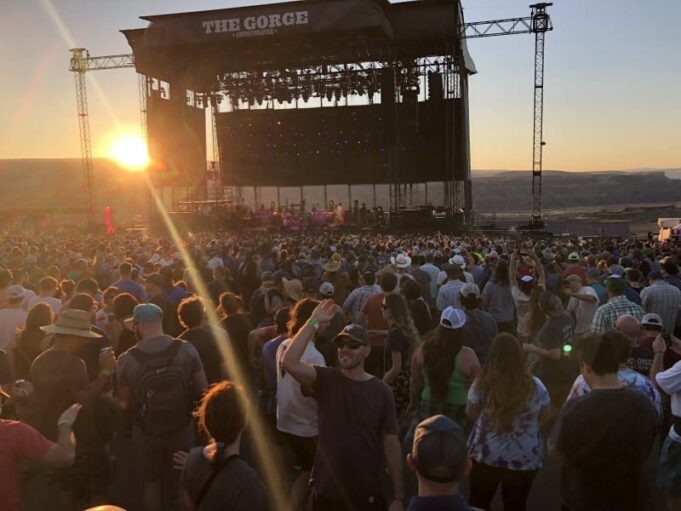 Nine Lives:  The tenaciously talented Vermont jazz rock ensemble Phish smoke-jumped into Washington State yesterday, sparking a three night run at The Gorge. Phish delivered 172 minutes of excellent musicianship, earning its crown as the world’s finest four piece live musical act. Nearly a sell out at 22,000, and everyone was happy to be there. This is the ninth set of shows for Phish at the Gorge: ’97, ’98, ’99, ’03, ’09, ’11, ’13, ’16, ’18. But there had never been a three night run.

The unobservant underbelly of the Phish scene is hard on any landscape – especially a rural one. Will the Gorge survive? Will the fans devolve? Will the honey buckets melt? We’ve never missed a Phish show at the Gorge, a residual of residing in our remote realm of ridicule. This year brings a sense of disconnectedness in a connected world, but The Gorge is a reminder that the primordial still counts for something, no bars needed. Phish remains Washington’s number one out-of-state tourist-drawing event, at least for now.

Pearl Jam issued 125,000 non-resellable seat licenses to fans around the globe for its August 8 and 10 Home Shows at Safeco Field (but will they play Lawn Boy?) Phish and Pearl Jam have differing styles, but converging audiences of middle aged people who love music: real music from real people playing real instruments. Neither band is a nostalgia act.

Phish formed in 1983. Phish has no hit records. Phish is not in the hall of fame. But Phish sells tickets by the thousands to live performances – no print ads, no radio ads, no interviews. After the show, often no legitimate reviews or recognition of the depth of what went down, socio-musically that night in the locale. (“Hey, that’s what you pay me for.”)

Mr. Anastasio is the band’s unspeaking spokesman in a t-shirt and red hair. Mr. Anastasio probably would be too embarrassed to admit he’s the alpha phishhead, but he’s seen all the shows. Mike continues his 21st century transformation back to 1972 with red pants and a Bowie haircut. Washington is fluid tolerant, Mike – you’re safe here. Page has a new shirt. His crown of hair is longer, highlighting his madman at the keys command. Jon remains the beat of the band – pulling it along out of trouble. He’s clean shaven and shorn, but boxy like a Japanese watermelon. A human square peg dropped into a round hole at the center of a tractor tire of drum kit accoutrements and microphones.

Set I: 8:19 pm – 9:31 pm Set Your Soul Free: “Burn it down, everyone’s dancing, set your soul free…” Fires all around, but no discernible smoke at the Phish show. Bearded Portland neighbor reminds us the local fires are “field fires, not forest fires, man. That shit is supposed to burn…”Portlanders know stuff like that. Mr. Anastasio is the song MVP, and his dirty tone sets the stage for the Pulaski Mcleod to come.

Roggae: “I can’t forget to turn the earth, so both sides get their share of darkness and of light…” Old people are getting down to this light ballad about dreams taking flight. Page is the MVP for being a slightly better singer than the other three. Poor Heart: “You won’t steal my tape recorder. I’ll call the Lord and he’ll put you in the pen, you won’t steal that thing again…” The economic success of King County does not trickle down to Grant County, other than opportunity for ransacking tents from 8:30 to 11:30 on concert weekends. Fish is the MVP for his smirk.

Undermind: “Mystified and misshapen, misinformed but not mistaken…” Fast, but not not focused. Skinny, but not ska. This Undermind was not like the Hampton 3/6/09 masterpiece that gave birth to Phish 3.0. This Undermind was more like an ignored teenager. Fish is the MVP. Simple: “We’ve got skyscraper, and it sings a pretty tune…” Phans are coming to the realization that tonight will not yield epic or exploratory versions of the repertoire. They’re keeping it simple. Beer hustling floor dude gets his bebop shirt call. CK5 is the MVP for his descending flashers.

Ya Mar: “Catching wild trout, ’til the break of dawn…” Light, poppy, wind driven. Sadly: muddled. Come on Phish, muddled is for other bands (bring back the doc?) The celestial show makes up for the soundboard, with Venus hanging below the moon triangulating with the Space Station as its bright beacon arches across the western sky. Page is the song MVP for his effortless genre crossing. Sand: “I would choose my own religion, worship my own spirit…” Washington is our country’s most tolerant state, yet has the lowest rate of church attendance. Mr. Anastasio is the MVP for peppering his song with his effects: the whale, the wail, the wham, the pip, the pop, the Edie Brickell, the Carlos, the Jerry, the jangle, the jaunt, the dirt, the drop, the loop, and the like.

Set II: 10:07 pm – 11:27 pm Chalk Dust Torture: “Who can unlearn all the facts that I’ve learned…” Fast pace into nowhere, like taking I-90 to central Washington. Dirty, wind blown, unfinished light outro. Page is the MVP for his 360 degree mad scientist style, totally justifying the piano lessons his parents made him take. My Friend, My Friend: “A hidden relic from his past, that wasn’t there when he looked last…” Seems dated and pointless. What is the statement here? Fish is the MVP for pushing it along.

Fuego: “I see guilty people, angels blowing horns…” Many thought this would be the opener, but Coran Capshaw has Fuego slotted as a mid second set song. Programmatic managers are one of the problems with our society. Dingy, unfinished. BOAF teases. Mike is the MVP.

Sparkle: “Laugh and laugh and fall apart…” Fall apart indeed. We’ve seen a Sparkle change people’s lives. Tonight, no one’s life was changed by this Sparkle, although the jamgrass outro was a reminder how talented these four musicians are.

Halley’s Comet: “I’m going down, to the central part of town…” Light and fun but with less magic, say than the confetti fluttering 8/5/10 Berkeley Greek Halley’s Comet. Unfinished. Fewer kazoo people in the audience than expected. CK5 is the MVP for his LED jiggle lights. Light: “I can see the light between me and my mind. I can see memories fall behind…” Complex, but this audience is brimming with oenophiles wanting more. Phish missed an opportunity to eclipse the Dick’s 9/1/12 Light, but snuffed itself. Mr. Anastasio is the song MVP for his whisper singing. 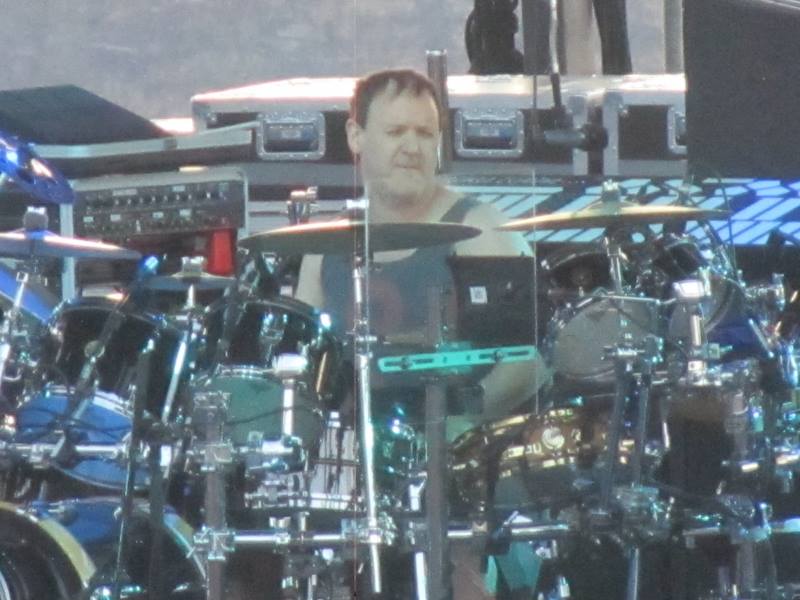 Waste: “A dream it’s true, but I’d see it through…” Mr. Capshaw requires his employees to perform second set ballads. Phish delivered with a true tone, finally connecting with the audience. Mr. Anastasio is the song MVP for his fret finger sliding sounds.

Rock & Roll: “Two TV sets and two Cadillac cars, you know it ain’t going to help me at all…” Fast paced, fine fine music. The audience is in synch, albeit too late to hook any of the box waitstaff who’ve already served last call. Page is the MVP for his velvet underground. Encore: 11:29 pm – 11:39 pm Tube: “Paranoid the doctor ran, shouting his translation…” Clear and modern; three-dimensional. Probably a few paranoid doctors in the house. Page is the MVP for being korgtastic.

From the video channel of William Swineheart

Golgi Apparatus: “I look into the finance box, just to check my status…” Fun, silly, and a nice reminder why you’re at the Phish show.

Mr. Anastasio is the MVP for dancing around nostalgia.