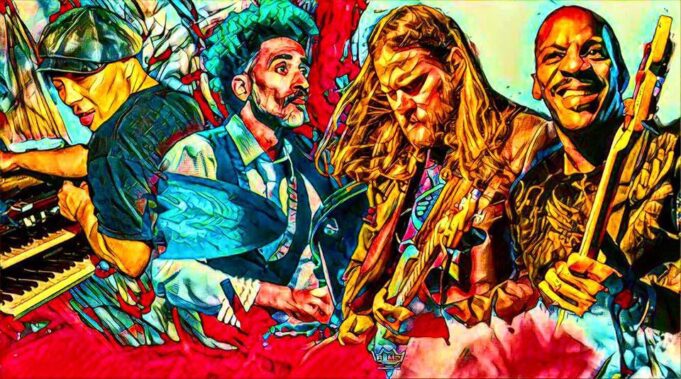 I caught the Joe Marcinek Band at the Boom Boom last Saturday night which featured Tony Hall on bass (Dumphastunk), Todd Stoops on keys (RAQ, Katharsis, Electric Beethoven) and Alan Evans on drums (Soulive).  Joe just finished a run in CA with this lineup. All of these guys are fantastic musicians. It was my first time seeing Alan Evans, who definitely caught my attention.

The Boom Boom Room is John Lee Hooker’s club, opened in the late 90’s which features tons of  great bands from around the country. The set started off with a Joe Marcinek original, “Mojo,” a funky tune that got the crowd grooving.  The band next covered the Allman Bros. “Dreams.” It was a really good rendition and had some deep long jams and fantastic dual B3/keyboard solos by Stoops.   This was followed by another JM original titled “Holtsford.”

John Gros, who opened the show, sat in for the next two songs, a spirited “Franklin’s Tower” and Down by the River (Neil Young) which was an extended jam I got lost in.  Next were two more JM originals, “George Washington” and “Funnily” which featured a saxophone sit-in and was followed by a nice “Shaky Ground.” The JM original “Hyperbole” was next and the set closed (at 2:45 a.m.:) with a nice “Shakedown Street” that had the entire room on its feet singing along and dancing with the band.

This show was part of a three day run of shows that included Chico CA and Santa Cruz in the days prior but this show really seemed like the capper!

Not from this show, but some audio from a Colorado show a few days later, taped by Eric Wilkens.