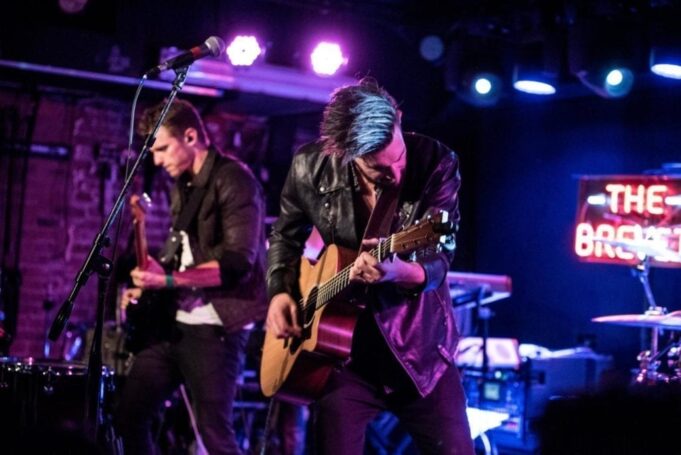 The Brevet
The Mercury Lounge, New York, NY
May 11, 2018
Story and photos by Mark Ashe PhotographyCheck out the Live Music News and Review.com Facebook page for updates and announcements.
To submit an article an article or review, or to just say hello hit us at [email protected]
See more of Mark Ashe’s photography at Live Music News and Review’s FB page HERE.
The Brevet, the Southern California band, returned triumphantly as a headliner to New York City.  Their last trip to the area saw them opening Magic Giant last year.  The Brevet played for an hour to a nearly full house at The Mercury Lounge on Friday night.  The five-piece energetic band consists of:
Aric Chase Damm – Vocals / Guitar
David Aguiar – Drums / Percussion
John Kingsley – Guitar
Greg Burroughs – Keyboards
Julian Johnson – Bass
Read the review of Magic Giant here.
The enthusiastic crowd was singing and dancing to every song and it’s amazing that social media can make an indie band from out west into someone’s favorite band in the east- all without radio and MTV. The band played as if it was a sold-out show at Madison Square Garden.  The Brevet are on the road for most of the summer with nary a day off as they look to conquer new neighborhoods.
The Brevet’s “LOCKED & LOADED TOUR” dates are below:
May 15– The Evening Muse