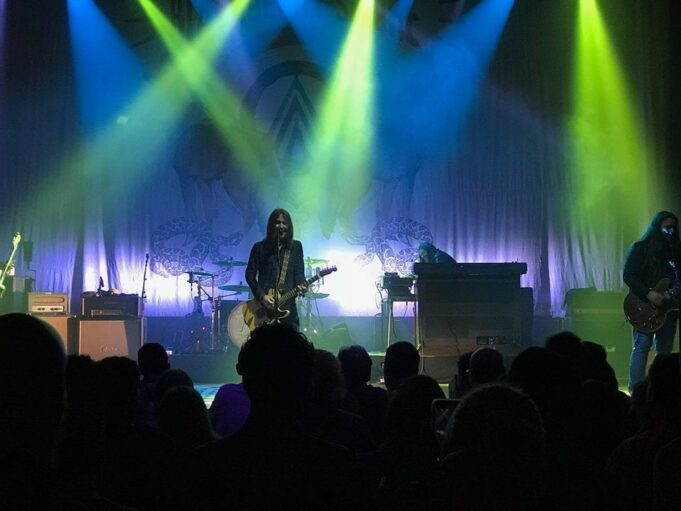 Blackberry Smoke The Strand, Providence, RI and the House of Blues Boston  May 4 and 5, 2018 by Joe Patten

Joe Patten is a well known and regarded sound professional in New England and he is also in the band Huxster.

Check out the Live Music News and Review.com Facebook page for updates and announcements. To submit an article an article or review, or to just say hello hit us at [email protected]  Standing on the floor at the Strand in Providence watching Blackberry Smoke and all I could think of was “why aren’t there more people witnessing this amazing band?” Just under two years ago I got a call from a fellow sound guy telling me about this band he got hired to mix.

They were playing an outdoor shed in Wilmington, North Carolina and I was doing some work in Asheville. I figured I’d go hang out with my friend and see the new band he was working. I knew absolutely nothing about them but on the drive across North Carolina I downloaded a couple of their discs. I spent the entire drive, about 5 hours playing their records “Whippoorwill” and “Holding all the Roses” over and over, I was hooked. Blackberry Smoke is a Southern rock band in the simplest terms and a damn good band. At the Strand in Providence and the following night at the House of Blues in Boston they proved just how good, if not great, they are. The two nights couldn’t have been more different from the set list to the crowd. BBS seems to fall into a lot of the jam band categories by some jamming and mixing up the set. Much like the Black Crowes used to do back in the day. However what separates BBS from most others is the songs. A wise old man once told me no one remembers the guitar solo but they will remember a catchy melody and lyric. Charlie Starr, the main songwriter, lead vocalist and guitar player for the band has a knack for telling a great story. His stories from the early days are all about hell-raising and the American dream. The later material are stories about being alive, being an adult with a family and still living the American dream. The band is NOT political and tends to stay neutral but you can close your eyes and imagine piling the kids in the Camaro and heading off to a baseball game. Or talking about having the most important thing in life be the song you just wrote.

New England fans:  Blackberry Smoke returns to the area to play Indian Ranch in Webster MA on September 16.  Tickets on sale May 11.

Back to the recent shows, first in Providence with a less than full house: There was a feeling of why this place isn’t packed. Live music has been suffering for at least a decade at the club and theater level. Blackberry Smoke is one of those bands that has been climbing up a slow and steady ladder for 15 years but very few people have heard of them up north. They hit the stage as they do every night kicking ass from the get-go. The band has a new record out, Find the Light, and they are promoting it and threw in a few songs from that album, but they focused on songs from the rest of their catalog, too. The mood was good and they played their hearts out ranging from full on rockers to acoustic ballads. Two hours of music without letting up was a welcome marathon from this great band. During their three-song encore they had the opener, Tyler Bryant and the Shakedown join them and tore the roof off the place. Those that came did not leave early and nobody could possibly have been disappointed by this great show.  Highlights included: “Sanctified Woman,” “Sleeping Dogs,” “Ain’t Got the Blues,” “Pretty Little Lie,” plus “Flesh and Bone.”

The next night was at the House of Blues in Boston on a fantastic spring/summer evening. The street outside was a mix of outlaws and college kids. The mood was different as it appeared more people in Boston knew and supported Blackberry Smoke. There was an energy the crowd felt which I think the band caught onto and stepped it up even more than the night before. That is not to say the previous night was subpar; it wasn’t. Once again, the band hit the stage with a kick in the teeth and didn’t let up all night. Almost a completely different set of music with an amped-up crowd that rose for the occasion. These people knew the songs and sang along at the top of their lungs. There was a magic that I’ve seen at other BBS shows that proves, once they get ya, you’ll be hooked. These guys are one of the last great live bands with songs you’ll remember. There is a little bit of Allman Brothers Band and Lynyrd Skynyrd in what they do but there is a bunch of Tom Petty and even some Beatles. They come at you with twin guitars and killer playing but only to support the songs. No bullshit rock and roll. The opener, Tyler Bryant and the Shakedown with Brad Whitford’s (Aerosmith) son playing guitar had the energy, they had the musicianship and really knew how to work the crowd. Their material seemed to be lacking hooks but that will likely come in time. Blackberry Smoke have paid their dues and it’s all up there on stage every night.   Again, the question must be asked WHY AREN’T THESE GUYS BIGGER!!??

HOB setlist:   Let Me Help You (Find the Door) Good One Comin’ On Workin’ for a Workin’ Man Wish in One Hand Waiting for the Thunder The Crooked Kind Payback’s a Bitch Sleeping Dogs Run Away From it All Lay It All on Me Ain’t Got the Blues Medicate My Mind Restless The Whippoorwill Flesh and Bone Sunrise in Texas (Michael Tolcher cover) One Horse Town Shake Your Magnolia Encore: Walkin’ the Dog (Rufus Thomas cover) Ain’t Much Left of Me F

Joe Patten is a well known and regarded sound professional in New England and he is also in the band Huxster.

New England fans:  Blackberry Smoke returns to the area to play Indian Ranch in Webster MA on September 16.  Tickets on sale May 11.