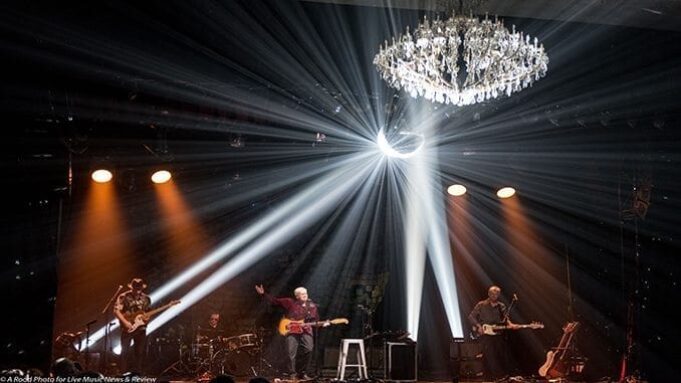 When Bruce Cockburn gazed into the capacity seated crowd at the El Rey Theatre in Los Angeles, he may as well been holding a mirror. Salted with dozens of spectacled, grey-haired men and their dates, the audience was clearly composed of lifers; fans that have followed the Canadian singer-songwriter and guitarist for the better part of his five-decade career.

So, when the opening notes were played of classics from the vast catalog that Cockburn has amassed, such as the first set highlight of “If I Had A Rocket Launcher,” or the second-half’s peak on “Wondering Where the Lions Are,” the otherwise polite and respectful mass turned boisterous. In between and through to the end, there were constant reminders of Cockburn’s quietly stinging humor, taking jabs at an unnamed current world leader who “gets enough attention already,” and a poignant anecdote about immigration ahead of “Free to Be” that served as both contemporary cautionary tale and historical footnote.

That’s Cockburn’s style, even today, as he dropped in a few songs from his latest, Bone on Bone, introducing the title track with another jab at aging. There was terrific irony in there, as well: Cockburn asking early of the crowd not to blow the pot smoke towards the stage; not with any moral objection but because it affected his vocal chords.

Those vocals were in wonderfully characteristic form; gravely and with a barking edge when needed, then smoother and hitting each high note. In his hands, the guitar, too, is still a powerful voice as Cockburn’s fingerstyle on instruments electric, acoustic, resonator, and even the exotic (a tiny stringed one traditionally made from the shell of an armadillo) is as melodic and technically dexterous as ever a time in the septuagenarian’s span.

Check out the full gallery of photos by Stevo Rood here.  Included are  photos that were taken 34 years ago when Stevo Rood photographed Bruce at the Orpheum in Boston in 1984.

So, when on the final performance of the night, Cockburn and his trio of bandmates turned the El Rey into a den of psychedelia it was no real surprise. For a raging “Stolen Land,” Cockburn’s guitar roared in a wash of feedback and wah-wah, whammy bar and delay. He let the last bits of shrieking guitar linger in the air before clicking off an effects pedal, turning sheepishly to his audience with a humble smile he’s had for 50 years, and bowing with his band to another earned and deserved standing ovation.

First Set:
Tokyo
Lovers in a Dangerous Time
States I’m In Forty Years in the Wilderness
Free to Be
Cafe Society
Peggy’s Kitchen Wall
If I Had a Rocket Launcher
Strange Waters
2nd set
Bone on Bone
Mon Chemin
Coldest Night of the Year
Jesus Train
Wondering Where the Lions Are