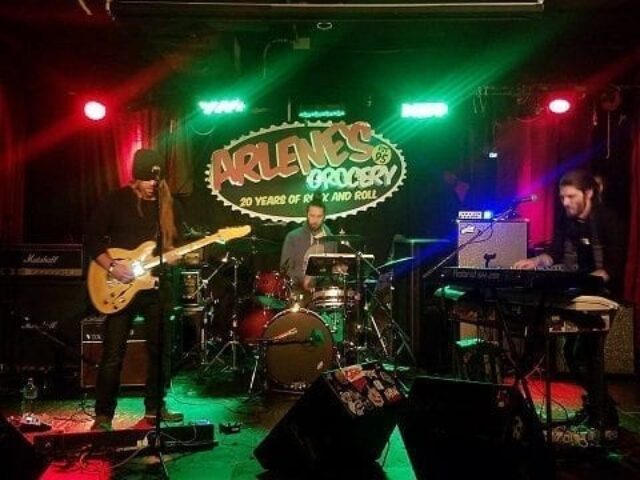 I have been hearing about Arlene’s Grocery for years now, and it turns out that it is an institution in NYC.  It is very small, probably less than 100 capacity in total, but a great place so far as stage, sound and lights.  It’s a great place to see a show and I was happy to be visiting there finally. We got there with a few friends to do a show that was being touted as a Phish run pre-show.  We missed the first band, Bee, as they were on early but got there in time to see the last half of the set by Baked Shrimp.   They are a young jam trio with compositional pieces.  Drums, bass and guitar with some vocals.  They are definitely from the Phish jam band world, but that is not a problem for me.  They are energetic, and purposeful and I thought they were a good band.

During their set I ducked back into the green room and hung out with the Flux boys briefly.  They were a little bit spun by getting caught in some major traffic jams and got the club a bit later than they had hoped.  But they were filled with optimism about their own multi show run which was to include this show, and shows in NJ and PA leading up to New Year’s eve. They hit the stage and immediately tore the place up..  They had adjusted their volume to perfectly fit the small room and were at a sprinter’s pace from the opening note.  The set was relatively short but very compact and well played.  The three brothers are more rehearsed, purposeful and energetic than ever. Second song they paid homage to the theme of the night and ripped an amazing First Tube.  The execution was impeccable, both a true representation of the song and their own twist for sure.  They followed up with originals including Monolith and my personal request, The Moth.  They tossed in another Phish reference with the 2001 theme ( “Also sprach Zarathustra” composed in 1896 by Richard Strauss.)  Overall the set was great, filled with positive vibes by the band who were running high on holiday cheer, and a welcome visit to a New York music institution. 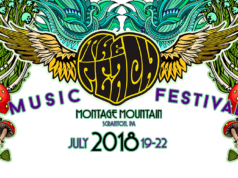 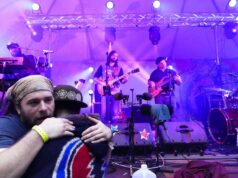 Live Music News & Review was born out of a love of live music and the wish to chronicle the amazing shows happening around the country. Stories and reviews are born both from our editorial board and from readers just like you around the country.
Contact us: lmnandr@gmail.com
5,744FansLike
209FollowersFollow
296FollowersFollow
6SubscribersSubscribe